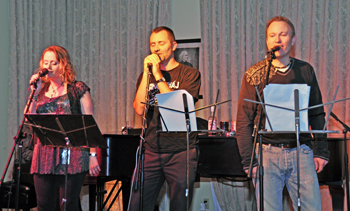 Above from left, Ottilia Kufcsak, Bela Gedeon and Bryan Dawson perform in the band The Diplomats, formed by Ákos Veisz when he moved from Hungary to work at the embassy in Washington.

When Ákos Veisz learned he was moving from Hungary to Washington, the first thing he packed was his saxophone.

That was in January of 2011. Veisz, a diplomat for the Hungarian Embassy specializing in political and economic issues, says he’s been playing the saxophone and clarinet since he was 11 years old and had always been in some form of a band. So soon after his arrival he began to seek out a musical outlet.

“I was looking for a band, but I found out that I had many colleagues who actually play instruments, so of course then there was the idea of, ‘Why don’t we play together?'” he recalled.

So about a month after arriving, Veisz sent an email to his embassy colleagues featuring a pointing Uncle Sam declaring “I WANT YOU FOR THE BAND.”

Veisz got responses from singers, a pianist, drummer and guitarist. But he lacked a bassist so he decided to learn to play on a basic level, chipping in on saxophone where it worked.

And so The Diplomats was formed.

Today, the band has seven members, three of whom work at the Hungarian Embassy. Due to the high turnover rate in diplomatic work, Veisz is the only founding member remaining in the band. To date, more than a dozen people have played in the band since it was formed.

As time went on and some members had to leave, The Diplomats reached out beyond the embassy to fill gaps in the lineup. Using email listservs, Veisz says the group sent thousands of emails calling for auditions when spaces opened up. Though not all of the current group members work at the Hungarian Embassy, most of the band has some sort of Hungarian or Central European connection.

Including Veisz, the current lineup includes David Rakviashvili, deputy chief of mission at the Georgian Embassy, on lead guitar; Bryan Dawson, Olga Major and Ottilia Kufcsak on vocals; Robb Hill, an American photographer who used to live in Hungary, on drums; and József Czímer on piano. 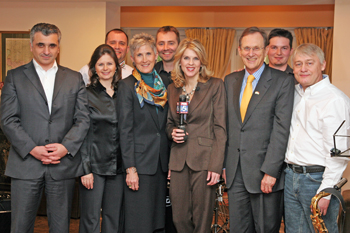 Dawson, executive chairman of the American Hungarian Federation and director of North American operations for the information management company ZyLAB, is among the newer members of the band. He joined earlier this year, hoping to rekindle his connection with music and his Hungarian roots, he said. Dawson’s mother is a native Hungarian who fought in the 1956 Hungarian Revolution. Though he was born in Miami, Dawson also spent time in Hungary just before the fall of the Iron Curtain.

“I joined the band mainly because of the personalities involved,” Dawson said. “I love the people we’re working with. It’s a great vibe.”

For now, the band exclusively plays covers — Veisz describes their focus as rock ‘n’ roll and blues, but set lists from the band’s first few concerts show some eclectic taste. To date, The Diplomats has tried on more standard rock songs from the likes of the Black Keys and George Harrison, but the group has also dabbled in Frank Sinatra standards and pop music from Pink. Of course, they do a few Hungarian tunes as well.

Veisz attributed the eclectic mix of songs to the band’s “very democratic” nature.

The Diplomats hasn’t debuted any of its own songs yet, but Veisz and Dawson say the band is working on writing some original material.

“We have one and a half [songs], which is a good start,” Veisz noted.

Recording an album isn’t on their radar just yet, but Veisz says it’s on the group’s “10-year plan.” He says the band’s lineup should remain the same for at least the next two years, which will allow them more opportunities to write original material.

The band has the support of Hungarian Ambassador György Szapáry, who allows them to use the embassy’s event and gallery space to rehearse and perform. So far The Diplomats has held three concerts at the embassy. The first was more of a test run, with mostly family and friends in attendance. The other two concerts were open to the public, held in December 2011 and May of this year. Veisz said more than 200 people attended their most recent show.

In March, the band briefly (in two 10-second snippets, Veisz says) appeared on Fox 5’s morning show in support of the Hungarian Embassy’s chef, Viktor Merényi, as he competed in the Embassy Chef Challenge. (Merényi went on to win the competition.)

No D.C. concerts are currently scheduled, but the band is going on tour. In October, The Diplomats will road trip to Sarasota, Fla., and perform at a Hungarian cultural festival there. To prepare, Veisz said the band will likely ramp up its weekly practices to twice a week and expand the repertoire so they can play more classic Hungarian rock songs.

In the future, band members hope to play more concerts in the D.C. area, perhaps even beyond the embassy. Dawson and Rakviashvili both said they’d like to perform at different embassies in the area. Veisz said he’d like to see the band participate in fundraising events down the line.

“Then we don’t just enjoy doing something,” Veisz said, “but we really did something.”

Kaitie Kovach is a freelance writer in Washington, D.C.