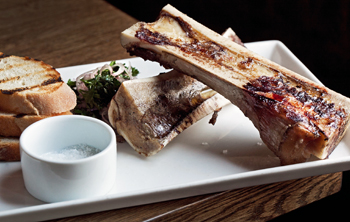 Roasted marrow bones are among the all-natural, sustainable dishes at the Queen Vic.

The evolving Atlas District, heart of the H Street corridor revitalization in Northeast, became a bit more spirited this spring with the opening of the Queen Vic British pub. The brainchild of Ryan Gordon and his British wife Roneeka Bhagotra, as well as partner Kevin Bombardier, the Queen Vic is named after a pub in the long-running British television soap opera “EastEnders.”

Like its namesake, the Vic gives guests a glimpse of this storied English tradition, offering them first and foremost a comfortable spot to — what else? — drink. The Queen Vic’s drink list features more than 30 beers from Great Britain as well as a few Indian varieties that pair nicely with the curries on the menu. For the more adventurous, the Vic offers beer and hard cider-based cocktails that are nothing if not inventive. Noel’s seduction, a bizarre concoction of Guinness, Kahlua and Frangelico, is dark, rich and makes a perfect dessert if you forgo the more solid options.

One of the distinctions between a pub and a restaurant seems to be the ratio of seats at the bar/lounge to dining table seating — and by this token the Vic fits squarely into the pub category. The space is rather small (seating about 100 guests total) and situated in a narrow renovated row house that’s dominated by large bars on both the first and second floors. Though a drinking spot, the acoustics are good and the noise volume is not bad. The owners have done a painstaking renovation of the space to create the feel of a classic English pub, complete with a red and black façade, dark woods, large-screen TVs over the bars playing various sports (mostly football, the British variety) and an English phone booth that houses an ATM machine. Alas there is no dartboard.

The Queen Vic has frequently been referred to as a gastropub. The distinction between a pub and a gastropub lies in the increased emphasis on the quality of food in the latter. And by this token, the Queen Vic certainly deserves the classification. But unlike a number of spots that have opened (and some closed, like CommonWealth) that have identified themselves (sometimes erroneously) as gastropubs, the Vic does not itself lay claim to this title but focuses instead on offering diners an ideal pub experience that just happens to have really great food. And the Queen Vic does.

To give patrons the experience that Bhagotra remembers growing up in Great Britain, the owners sought out Adam Stein to serve as executive chef for the Vic. Stein, who had served as executive chef at the Looking Glass Lounge in D.C.’s Petworth area (another evolving neighborhood facing the same sort of challenges as H Street), is a young but accomplished chef. He follows a farm-to-table approach in his menu building and cooking, basing his dishes on locally sourced, seasonally available, and sustainable ingredients. He butchers in-house and makes his own charcuterie so that even classic pub dishes like bangers and mash are straight from the source. Likewise, Stein’s fish and chips, a deliciously greasy version, uses sustainably caught fish that vary with local availability so that each visit you might find a different fish on the plate. Stein’s cooking principles extend to utilizing the whole animal, so the menu offers a range of offal (the entrails and internal organs of a butchered animal) in the guise of beef heart tartar, roasted marrow bones, pan-seared chicken livers and head cheese.

Though he doesn’t have a British pub cooking background, Stein has put together a menu that features many of the most traditional pub favorites. Stein’s Welsh rarebit is a rich and cheesy appetizer made up of thick slices of house-grilled white bread and thrice-cooked chips, available separately or with fish, steak, or the delicious lamb and beef burger — perfect with Vic’s house-made aioli, mustard and commercial ketchup. (Our waiter tells us that in English gastropubs, no one will eat the house-made ketchup, preferring the store-bought stuff, so they don’t bother getting fancy with the ketchup either.) For fans of the big English breakfast, the Vic offers the Full Monty: eggs, bacon, sausage, tomato, mushrooms, beans and toast. This hefty delight can be had at both brunch and dinner. 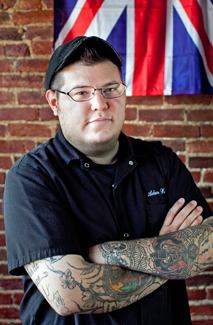 Executive chef Adam Stein butchers in-house and adheres to a philosophy of utilizing the whole animal in his cooking.

Bhagotra, who grew up in Britain and Wales, got her first taste of the restaurant trade in her parents’ award-winning Indian restaurant, Bokhara Brasserie, so the inclusion of a few curries on the Vic’s menu, as is the case with many English pubs, seems only natural. In fact, on his pub immersion journey before the Vic’s opening, chef Stein visited the Bhagotras’ restaurant to learn how to make authentic chicken tikka masala and vegetable curries. And the results make you glad he took the trip. These are not the pale, watered-down versions of the dishes sometimes found in pubs in England; they have the rich and complicated flavors of their origin and are as worthy a choice as any dish on the menu.

The Queen Vic sports the obligatory chalkboard on which Stein announces his specials for the evening. It is in these dishes that you most clearly see the work that has earned the Vic a nod as a gastropub. On a recent evening, Stein offered butter-poached trumpet mushrooms. The sauce was so rich and delicate that it was tempting to pick it up and drink it as a sort of exquisite soup. That same night, lightly dressed roasted beets were paired with micro greens, crisped onions and fennel and dusted with pollen. Both dishes rivaled anything you’d find in D.C.’s highest-end locales.

The Queen Vic offers only a few desserts though. There’s no spotted dick, but you can get an Eton Mess — chopped fresh strawberries, meringue pieces (quite a bit overcooked on a recent visit) and thick, barely sweetened whipped cream. The lemon custard tart on a short crust with that same whipped cream is satisfyingly sweet and sour. And the sticky toffee pudding — with a spongy cake, super-rich toffee sauce and surprisingly salted whipped cream — is perhaps the most interesting of the three choices.

The Gordons are no strangers to the H Street corridor. As part owner and former bartender of the Pug, a much-beloved bar in the area, Ryan Gordon has witnessed bars and restaurants come and go in the neighborhood, and understands what his customers want. The service is informal but excellent. Most servers seem delighted with your visit and want to make sure you try as much as you can from the menu, and that you enjoy every bite. The food usually arrives quickly and as ordered (though a busy night might tend to slow things down a bit in the small space). The prices, although not that low, are reasonably doable. And the drinks are mighty good. And that is, of course, what it’s really all about.