Home The Washington Diplomat August 2011 Coming of Age Amid Ravages of AIDS in ‘Life, Above All’ 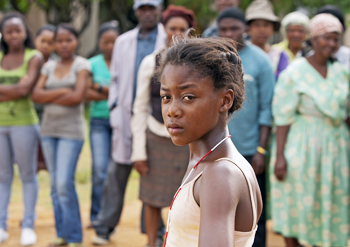 Khomotso Manyaka, 15, gives a tour-de-force debut performance as a young South African girl struggling to keep AIDS from tearing apart her family in “Life, Above All.”

Here’s a very rare treat for the discerning cineaste and linguistic enthusiast. South African films have made it to D.C. screens before, but I cannot recall watching any feature shot in the Sotho language. “Life, Above All” — South Africa’s official submission for Best Foreign Language Film at the 2011 Academy Awards — has already won the François Chalais Prize at the Cannes Film Festival. The lauded movie by South African filmmaker Oliver Schmitz’s (“Mapantsula,” “Paris, Je T’Aime”) lauded movie, is based on Allan Stratton’s “Chanda’s Secrets,” his international award-winning novel about AIDS orphans in sub-Saharan Africa.

The film is a bleak look inside modern South Africa and the ravages of the AIDS epidemic, but the somber subject matter is balanced by the astonishing fortitude of its star, a young girl who is more mature than many of the adults in the movie.

Amidst all the chaos, Chanda’s English teacher has good intentions but is unable to make his smart student — who must shoulder the burdens of caring for her family — go to school. Immediately following the loss of her newborn sister, Chanda hears a rumor that has spread like weeds throughout the village. The gossip devastates her already-struggling family, compelling her mother to go into exile to escape the community’s harsh scorn — and worse. Ever loyal to her mother and family, Chanda believes the rumor to be unfounded and based on superstitious prejudice. So she departs on an epic journey to find her mom and the truth.

This enlightening quest fuels a compelling, universal coming-of-age story about a fearless young girl who bravely summons a deep well of courage inside her to navigate her own way through the hazards of the modern world. 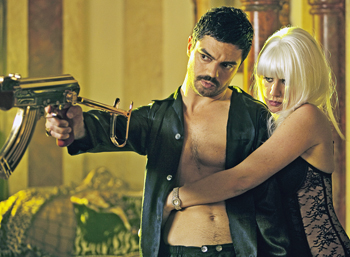 Dominic Cooper, left, stars with Ludivine Sagnier in “The Devil’s Double,” inspired by the true story of an Iraqi army lieutenant who became the body double for Saddam Hussein’s notorious son Uday.

In the chilling “The Devil’s Double,” an adaptation of Latif Yahia’s autobiographical novel, British actor Dominic Cooper (“An Education,” “Mamma Mia!”) not only appears in his first important lead role, he must master starring as a double threat on screen. Cooper does so with gusto as both Iraqi army lieutenant Latif Yahia and Uday Hussein, former Iraqi dictator Saddam Hussein’s notoriously barbaric son, known as the “Black Prince.”

Yahia is commanded to act as the “fiday” — or body double — for Uday, becoming integrated into the highest social order in Iraq and making appearances as a member of the “royal family.” He learns to walk and talk like Uday, a spoiled bad boy who’s exploited his privileged birth to party lavishly in unbelievable opulence and rage endlessly without any legal checks. Yahia is forced to abandon his moral beliefs while playing the character of Uday, a sadistic psychotic with insatiable demands for sensual pleasure and brutal violence, fueled by loose women and an unlimited supply of a variety of drugs.

Yahia becomes intimately close to Sarrab (French actress Ludivine Sagnier of “Mesrine,” and “The Girl Cut in Two”), Uday’s tantalizing mistress who can’t escape her own ghosts. In 2003 Baghdad, Iraq’s impending war with Kuwait casts a shadow on Uday’s mobster organization, an unstable apparatus on the precipice of collapse. Under threat of death to himself and his family, Yahia can’t find any easy way out, even though he senses the end may be near.

New Zealand director Lee Tamahori (“Once Were Warriors,” “Die Another Day,” “Along Came a Spider”) deftly succeeds in crafting a thrilling account of the last days of Baghdad for the Black Prince.

Key to the Past 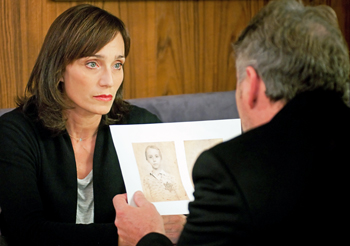 French director Gilles Paquet-Brenner’s “Sarah’s Key,” adapted from the novel by Tatiana De Rosnay, explores difficult ethical issues of the Holocaust in fascinating ways. In July 1942, in the middle of a Parisian night, 10-year-old Sarah Starzynski (Mélusine Mayance) is arrested along with her Jewish family by the French gendarmes. Sarah makes the difficult decision to protect her younger brother by locking him in the cupboard of a bedroom — their secret childhood hiding place — with the intention to free him after the family comes back.

Flash forward 67 years later, American reporter Julia Jarmond (Kristin Scott Thomas) is researching the Vel’d’Hiv Roundup, the French police’s mass detentions of Jewish citizens during World War II. She and her husband Bertrand (Frédéric Pierrot) take possession of the Parisian apartment where he grew up, which turns out to be where Sarah’s family lived. Bertrand’s family had purchased the flat in 1942 following the eviction of the Starzynski family. Julia’s investigations unveil a sequence of secrets connecting her to Sarah while also raising defining issues about her own romantic life, transforming professional search into a personal journey of critical emotional self-discovery.

The 16th Annual Made in Hong Kong Film Festival (through Aug. 21) concludes on Sun., Aug. 21, with a screening of the Jackie Chan classic “Drunken Master” (2 p.m.) followed by “The Hip-hop/Kung Fu/Afro-Asian Connection: A Panel Discussion” (4 p.m.), presented in partnership with the exhibition “RACE: Are We So Different?” at the National Museum of Natural History.


“Recovered Treasure: UCLA’s Annual Festival of Preservation” (Aug. 5-28), now in its 17th year, provides a wide perspective of the UCLA Film & Television Archive’s broad collection. “This Other Eden: Ireland and Film” (Aug. 27-Sept. 25) starts a survey of Irish films, many from the Irish Film Institute in Dublin.