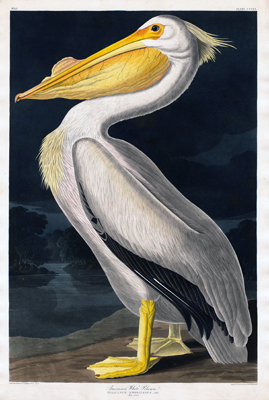 Among the 300 American prints on display at the National Gallery of Art is Robert Havell Jr’s “American White Pelican” (after John James Audubon).

The National Gallery of Art’s crowd-pleasing journey chronicling 300 years of American art through printmaking makes a big, memorable statement about the often-ignored medium.

With more than 150 prints on display, the massive exhibition takes museum visitors from the Colonial era to the present day, drawing from the gallery’s wide-ranging collection of works on paper. With its emphasis on the format as a means to protest and call attention to injustice, “Three Centuries of American Prints from the National Gallery of Art” offers a sharp reminder to viewers of the power of print.

It’s a dizzying exhibition in its depth and breadth, and one that Judith Brodie, curator and head of modern prints and drawings, told The Washington Diplomat she sees as a “kind of corrective” to the large survey shows that often neglect the medium.

“They’re almost always told through the lens of painting, sculpture and architecture — and every once in a while they sort of put in a print,” Brodie said. “But prints are integral to the history of American art.”

With so many images lining the walls, the show can feel overwhelming at times, but the thematic and chronological flow guides you through the striking collection with ease. Visitors start in a room dedicated to transatlantic exchange with Britain, where maps, portraits, early American landscapes and Paul Revere’s famous engraving, “The Bloody Massacre,” battle for attention. It’s a brilliant start to the show, highlighting the theme that prints serve as a forum for social commentary and revolution, as well as a cheap way for artists to deliver their particular vision of America and its future to the masses.

Visitors then travel through early 19th-century expansion and conflict to its later focus on aestheticism, with James McNeill Whistler’s “Nocturne” a highlight — its inking effects giving the piece a soft, diffused light that showcases the remarkable diversity in printmaking styles. 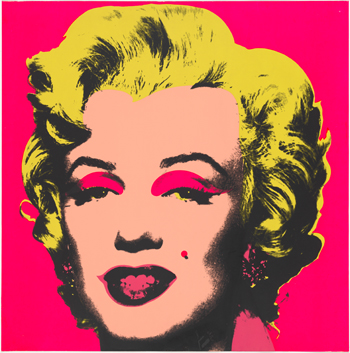 Entering the 20th century with a dramatic transition to pieces inspired by European modern movements such as impression, fauvism and cubism, the prints beg viewers to take a closer look and concentrate on lines and shadow above all else. From New York City’s newfound wealth to the desperation of the Great Depression and wartime America, the exhibition winds through the 20th century and out of the emphasis on black and white to the explosion of color from the pop art movement.

The final room takes on the more transient notion of “pluralism,” featuring works such as the Guerrilla Girls’ subversive lithograph “Do women have to be naked to get into the Met. Museum?”; Glenn Ligon’s “Untitled: Four Etchings [B]” repeating a line from Zora Neale Hurston’s essay “How It Feels to Be Colored Me”; and one of Jasper Johns’s famous interpretations of the American flag in his “Flags I” screenprint.

“One of the really interesting themes of the show, and printmaking in general, is the use of print as a means to protest or call attention to injustice. You can trace it through this whole exhibition,” Amy Johnston, assistant curator of prints and drawings, said.

The National Gallery, currently celebrating its 75th anniversary, has collected American prints since it opened, making the medium a natural choice for a featured exhibition, Brodie noted. 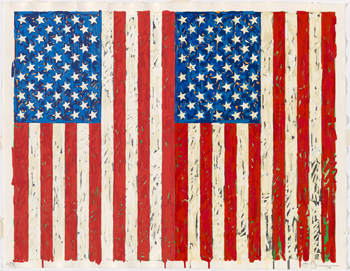 “One of the themes that we did very consciously consider was that along with the very famous artists such as James McNeill Whistler, Mary Cassatt and Winslow Homer and Andy Warhol and Ed Ruscha … there are these other wonderful artists who are not generally known. We really wanted to bring some of those artists to the fore,” Brodie said, pointing to Mabel Dwight and her comic lithograph “Queer Fish” as one of those gems.

The curators were also fortuitously aided by impressive donations from private collectors and added pieces from the Corcoran Gallery that filled major gaps in their survey of American printmaking. “It’s quite an achievement that the exhibition is drawn from our permanent collection,” Johnston said.

“Three Centuries of American Prints from the National Gallery of Art” puts print — and its inherent power — back in the spotlight. Catch the exhibition, which the gallery touts as “the first major museum survey of American prints in more than 30 years,” through July 24. It will then travel to the National Gallery in Prague and Antiguo Colegio de San Ildefonso in Mexico City.

Three Centuries of American Prints from the National Gallery of Art

located on the National Mall between 3rd and 9th Streets at Constitution Avenue, NW