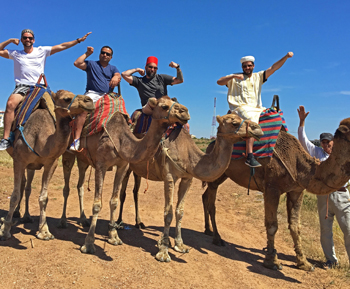 With more than 2,200 restaurants inside the D.C. border alone, it’s easy to travel the world by way of your stomach. Cuisine available in the metro area ranges from classic American to Afghan, El Salvadoran, Ethiopian, Indian, Japanese, Laotian, Lebanese and Russian. To stand out in this foodie world, the chefs behind these international restaurants have to know their stuff. And they do that in part by traveling.

Mike Isabella, who has nine area restaurants — so far — spent more than two weeks in Portugal, Morocco and southern Spain in preparation for his next venture: Arroz, a Spanish concept restaurant inside the Marriott Marquis. During that time, he visited wineries, attended olive oil tastings and ate at top restaurants as well as mom-and-pop shops.

D.C. restaurateur Mike Isabella, center, visits Morocco as part of a trip he took to the North African country, as well as Portugal and Spain, to prepare for his latest venture, a Spanish concept restaurant named Arroz.

“We eat all day long,” said Isabella, who travels with his culinary team. “Sometimes we’ll eat at four or five restaurants in a night, just ordering food, taking a bite or two, taking pictures of it, taking notes about it. The next day, we’ll grab breakfast or lunch and review what we saw and start coming up with, ‘What would you do, how would you do it, how can we sort this out, how could we get it?’ And that’s how it kind of starts.”

He returned from the trip and began writing the menu for Arroz (Spanish for “rice”), which is slated to open this year.

Isabella traveled before opening his other restaurants, too. For example, before launching Kapnos in 2013, he went to northern Greece and Turkey. For the almost two-year-old Kapnos Taverna, a Virginia sibling of the D.C. restaurant, he island-hopped through Greece, stopping at places such as Crete, Santorini and Mykonos, paying close attention to the seafood there.

“The toughest restaurant is going to be Arroz because I’ve never cooked this professionally — Spanish food. I’ve just eaten it and traveled it a lot. It’s always been a huge inspiration since I’ve been a young cook,” said Isabella, who competed on Bravo’s “Top Chef.”

Travel is the main reason he started cooking. “The first country I ever went to was Brazil in South America, and I went with one of my chefs and we were cooking out there, and I just kept it going,” he said. Since then, he has traveled with other chefs, including another local celebrity, José Andrés.

Isabella, in fact, worked for Andrés as executive chef of Zaytinya before opening his own venture, the Italian-inspired Graffiato. Isabella has since opened restaurants that specialize in Greek, Mexican, Japanese and French Mediterranean food.

This fall, Isabella visited Cuba. Last year, he was in Milan. He visits Greece every other year. And in December, Isabella was headed to Italy’s Tuscany region because one of the 10 concepts he plans for Isabella Eatery, coming next summer to Tysons Galleria, will be a Mediterranean-style steakhouse.

“You see the culture, you see the people, you see the food, you see the history. It’s just constantly learning,” Isabella said. “I always say that what inspires me is every chef out there in America working hard and putting out cool food and good food. It’s the same thing when you travel abroad. You can’t get certain fruits from South America or Asia. You can’t get certain products. You can’t do certain techniques because of climates. Out there, you’re really absorbing the culture of what goes on in these countries that you can’t absorb here in the States.”

His dream destination is Southeast Asia, although he said he doesn’t expect to get there for another few years. Travel purely for pleasure is rare, Isabella said. “I would say 50 to 60 percent is vacation time, but when it comes to dinner or lunch, I usually have places to go that I have to check out.” 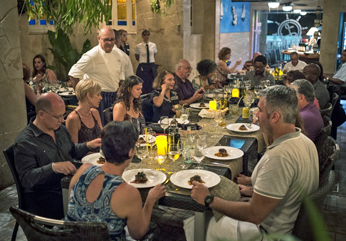 Chef Guillermo Pernot of Cuba Libre Restaurant and Rum Bar (standing) regularly organizes trips to Cuba, where he hosts lunch and dinner in different restaurants where Pernot knows the chefs and sometimes cooks alongside them.

“Everybody knows Cuban food because of … certain restaurants in Miami that are very popular, but that is food is 50, 60 years old,” Pernot said. “After the [Cuban Revolution in the 1950s], everybody left and they never kept up to date. Cuba was closed until 10 years ago, basically. Nobody ever changed” the food.

During his visits, Pernot found that Cubans frequently cook with charcoal, sometimes because there is no natural gas or electricity. They also eat locally grown food and produce, but use, very little dairy.

“It’s still intriguing me. Every time I travel, I learn something new,” said Pernot, who visits Cuba twice a year. (His next trip is in March 2017.)

He spends two weeks there, with the first week devoted to Pop-Up Paladar, which he and Cuba Libre started in 2012 as a culinary exchange series with Cuban chefs, who are invited to cook in Cuba Libre’s kitchens. The Argentine native, whose wife is Cuban, takes 24 people for a culinary tour of Havana for six days. They have lunch and dinner in different restaurants where Pernot knows the chefs and sometimes cooks alongside them.

During the second week, Pernot shadows a chef, going to the markets, watching them cook and traveling with them around the island. He applies what he learns to Cuba Libre’s menu carefully.

“When I come back, I may use one technique or one vegetable that I’ve never used before, or a different combination or a different approach to what I’m doing, but I try not to come in and shake everybody’s world by saying, ‘OK, I just came back from Cuba. Let’s change everything,’” Pernot explained.

Traveling makes him a better chef by constantly challenging him, he told us. “The day that you say, ‘I know everything. I have nothing to learn,’ that’s the day you should just quit,” Pernot said. “Every time you walk into the kitchen, you find something new.”

With four restaurants and two trips to Cuba, he doesn’t have much time for leisure travel, but he’s got his eye on Peru. “I’m trying to talk my family into maybe next year spending a few weeks down there,” he said. “The cuisine of Peru is just fascinating. They have over 1,000 types of potatoes and I don’t know how many kinds of chilis, different peppers, and [with the] influence of the Incas and the Japanese people, they have created a new cuisine that is just amazing.” 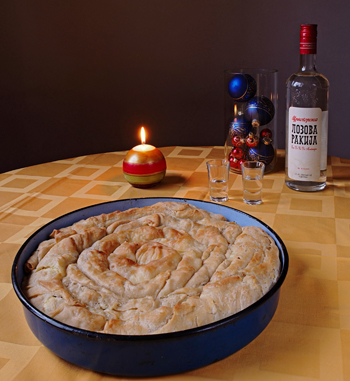 Česnica is part of a Serbian Christmas-New Year tradition whereby a coin is put inside the load of bread. Whoever gets the coin in their slice will have a blessed year.

Does that mean it’s impossible to separate business and pleasure? “You have to eat so might as well combine both,” Pernot said.


Traveling never topped the to-do list for Chris Hawkins until he started working for Ambar, a Balkan restaurant in D.C., and found himself being sent to the Serbian capital of Belgrade. Hawkins, who recently left Ambar’s Clarendon, Va., location, took his third trip to Serbia this summer, spending the entire month of July at Ambar’s restaurant in Belgrade.

“I was just working in the kitchen … with the chefs there all day, just seeing what they do from morning until night — not a lot of time at all to go out, but the point was to … learn certain techniques, especially the rotisserie and the charcoal grill setup they have over there,” Hawkins said.

Heavy on small plates, everything at the Clarendon location is cooked on a charcoal grill, with rotisserie chicken, lamb and suckling pig also available. Hawkins changed about 80 percent of the Capitol Hill location’s menu before opening in the trendy Arlington neighborhood. Staples that remain include the stuffed sour cabbage and meat and cheese pies, although Hawkins added spinach to the latter — “something I saw in Belgrade and thought was a neat addition.”

Another thing he saw there was the pride people take in preparing food, oohing and aahing over the finished product and telling stories about how their mothers used to make the same dish. “Every time something comes out of the oven or is finished, they’ll gather around and look at it,” Hawkins said. “You could really tell that everyone that works in the kitchen is just very passionate about what they do, and it’s not just a job. That’s really one of the best parts about going to Serbia — was experiencing the hospitality. Everyone is trying to give you something to try or wants to tell you something about the food, and how every single person is very intense about the quality.” 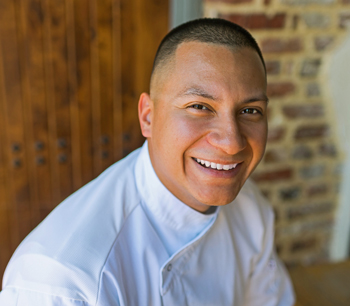 
Alexis Samayoa, executive chef of Espita Mezcaleria in D.C.’s Shaw neighborhood, is fascinated by Mexican food — but not the Americanized kind served at Chipotle or Taco Bell.

“The draw for me is number one, it’s not understood, and number two, it’s not defined as well as it should be,” Samayoa said. “Mexican cuisine is not expressed in the right way. There are a lot of different styles of Mexican food that you can eat, and a lot of people think Tex-Mex is it, and it is not.”

Before Espita Mezcaleria opened last February, he did his homework, starting with a lot of reading and then shifting to travel to Oaxaca in southern Mexico, where he and his partner, a master mezcalier, went from farm to farm and neighborhood to neighborhood eating home-cooked meals.

“It’s definitely a lot of reading — reading Diana Kennedy’s cookbooks, Rick Bayless’s cookbooks, some of the people who have done this way before I have,” Samayoa said. “When you have an idea of something and then you put chef intuition into it and you’re using these classic Oaxacan-style ingredients, that’s where you start doing the equation.”

And that equation involves finding the right balance between authentic Mexican food and familiarity. “I wanted to do something that nobody’s comfortable with. The level of comfort, I just brought it up another notch,” Samayoa said. But at the same time, he added, “I have to make it easy. I can’t make it too spicy, can’t make it too weird. I have to change some names here and there so somehow you can relate and understand it. If that doesn’t work out, then the dish is probably not going to be a good one.”