Home The Washington Diplomat May 2013 To Prove His Point, Norwegian Sets Out on Grueling Sea Odyssey 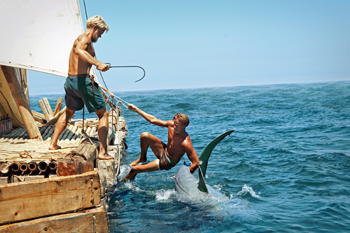 “Kon-Tiki” is the true story of a Norwegian ethnographer who sails 4,300 miles on a precarious wooden raft to prove his theory that South American sailors first landed on Polynesian islands 1,500 years ago.

Hagen portrays Norwegian ethnographer Thor Heyerdahl, who struggles to get his anthropology thesis published, based on his work for 10 years on a French Polynesian island, where he lived with his beautiful, supportive wife Liv (Agnes Kittelsen). In 1947, Heyerdahl decides to verify his controversial hypothesis that South American settlers first landed on Polynesian islands 1,500 years ago, setting out to prove that South American sailors already had the expertise and technology to navigate the Pacific Ocean before Columbus “discovered” the New World.

His plan to replicate the dangerous journey, with a crew of five men sailing 4,300 miles on a precarious balsa wood raft, captures worldwide attention. Despite nearly drowning as a child in freezing Norwegian waters, Heyerdahl is a man used to taking risks all his life. Though he still cannot swim, the intrepid adventurer embarks from Peru on what ends up being a harrowing odyssey, which lasts an interminable 101 days.

Writer Petter Skavlan, with script consultant Allan Scott, pens a captivating screenplay that brings out elements of the true story while also packing a big impact — despite sketchy character development that prevents the audience from learning much about the people they’re following. The result is a satisfying old-fashioned adventure epic paying homage to classic Hollywood: less filling, tastes great.

Thrills ‘In the House’ 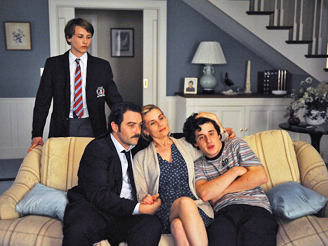 Ernst Umhauer, top left, plays a young man who infiltrates the home of his classmate in the thriller “In the House.”

With the gripping thriller “In the House,” French writer-director François Ozon (“Swimming Pool,” “8 Women”) adds another gem to his disparate, consistently impressive filmography.

As usual in an Ozon film, the director gets the best out of his stable of actors. Prolific French actor Fabrice Luchini, who previously acted for Ozon in “Potiche,” was nominated for the Best Actor César Award (his seventh César acting nod) for his standard quietly charged performance as schoolteacher Germain. Despite having to match thespian talents with such an established icon as Luchini, newcomer Ernst Umhauer is no slouch playing Germain’s gifted pupil Claude Garcia. The sublime British-born actress Kristin Scott Thomas is always a delight to see on screen, this time as Germain’s wife Jeanne, a contemporary art dealer. Meanwhile, Emmanuelle Seigner, Roman Polanski’s wife and a regular actress, livens up her role as the beautiful Esther Artole, the mother of Rapha, a rare middle-class student at the prestigious high school where Germain teaches.

There, Germain is perpetually peeved by his students’ indifference and banality. While grading papers one night, his attention is caught by the unique perspective of Claude, a timid pupil who displays surprising literary talents that inspire the cynical teacher. Claude writes about how he’s befriending his classmate Rapha in order to visit his house, including his mother Esther, the object of Claude’s affections. Wanting to know what will happen next, Germain becomes more than just a voyeur. He influences the outcome by urging Claude to carry on his scheme of writing about what takes place behind the walls of his classmate’s home, but both are unable to stop as they venture into darker territory.

In an ode to Hitchcock, like many a French filmmaker, Ozon adroitly blends mystery with black humor to defuse and pace the tension. His stylish direction employs an array of cinematic flourishes to keep the viewers’ eyes on the screen, assisted by vivid cinematography by director of photography Jérôme Alméras and crisp editing by Laure Gardette. The entrancing visuals are enhanced by a complementary score by composer Philippe Rombi, a regular collaborator with Ozon. 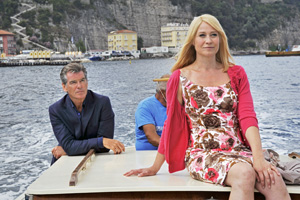 Pierce Brosnan, left, and Trine Dyrholm star in the entertaining romantic comedy “Love Is All You Need.”

In her latest film, the entertaining romantic comedy “Love Is All You Need,” Danish director and co-writer Susanne Bier (“Things We Lost in the Fire,” “After the Wedding,” “Brothers”) takes a step back from the weighty subject matter occupying her body of work of late, including her previous movie, “In a Better World.” Though utterly predictable, “Love Is All You Need” is a lightweight specialty film in the top tier of its genre. Think Miramax audience favorites epitomized by “Like Water for Chocolate.”

In Copenhagen, pretty middle-age Danish hairstylist Ida (Trine Dyrholm) has been enduring a lengthy fight against breast cancer. She finally finishes her chemotherapy and picks up a wig for her daughter’s impending nuptials. Things are looking up until she gets home only to find out that she’s being dumped by her husband Leif (Kim Bodnia), who’s been screwing the much younger Thilde (Christiane Schaumburg-Müller). Meanwhile, English businessman Philip (Pierce Brosnan) lives alone in Denmark, focusing all his time on work after his wife dies and his adult child grows distant.

After dating for only three months, Philip’s estranged son Patrick (Sebastian Jessen) and Ida’s daughter Astrid (Molly Blixt Egelind) decide to have a destination wedding in Sorrento, Italy. Ida and Philip’s first meeting is not exactly fortuitous. She rams into the rear of his car in the parking lot of the airport, then learns that the angry driver is her daughter’s future father-in-law. Ida immediately dislikes Philip’s rude behavior, which she freely expresses. Well, it turns out the bride and groom’s respective parental units have much more in common than their bitterness and suffering. They eventually make nice and find a way to help each other progress past their grief.

Director Bier and Anders Thomas Jensen, her regular screenwriting partner, come up with a serviceable script that gets the job done. Director of photography Morten Søborg captures lovely images, including the postcard-friendly splendors of the Amalfi Coast, that set a pleasant ambiance for the romantic mood. Bier’s direction is as steady as always, and she gets appealing performances from her cast. And movie star Brosnan (of James Bond fame) looks better than he has in quite a while.


The Freer and the National Museum of African Art screen a rare look at African expatriates in China. “China and Africa Onscreen: ‘My Father’s House'” (Wed., May 1, 7 p.m.) is discussed by Dr. Yoon Jung Park, convener-coordinator of the Chinese in Africa/Africans in China Research Network and a visiting professor of African Studies from Howard University.

Chinese director Luo Li discusses in person his independent film “Emperor Visits the Hell” (Sun., May 5, 1 p.m. ), copresented by the Confucius Institute at the University of Maryland.

The retrospective “Visionario: The Films of Guillermo del Toro” (through July 2) honors the stylish Mexican director. May selections include: “Blade II,” “The Devil’s Backbone,” “Hellboy” and “Hellboy II: The Golden Army.”

“American Originals Now: Zoe Beloff” (May 4-5) offers a retrospective of artist Zoe Beloff, media and art professor at Queens College. ” Working primarily with film, installation, and drawings on paper she explores spiritualism, psychoanalysis, and — more recently — progressive social movements with a keen interest in manifesting and communicating what seems ephemeral,” according to the gallery.