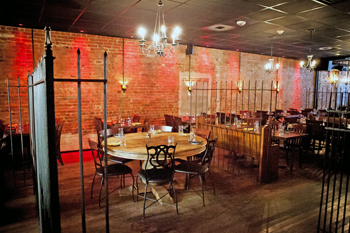 Tacos, enchiladas, taquitos and other Mexican fare are reinterpreted by chef Mike Isabella at his new Georgetown restaurant, Bandolero, whose design evokes the Mexican Day of the Dead.

Chef Mike Isabella is a busy man — and a growing brand. Not that long ago, the tattooed “Top Chef” contender turned D.C. culinary restaurant phenom was dishing out Mediterranean tapas at Zaytinya under the watchful eye of José Andrés. But since his last appearance on Bravo’s proving ground for aspiring celebrity chefs in 2011, Isabella has opened two unique concept restaurants — Graffiato and Bandolero — and has two more in the works (the Greek-themed Kapnos and a sandwich spot called G).

He’s also got a new cookbook and just last month was designated a State Chef as part of the State Department’s Diplomatic Culinary Partnership program (see story). His new title added a few embassy stops and outreach meetings with restaurant owners and vendors to his recent trip to Greece and Turkey, which he took to conduct research for one of his upcoming projects.

With barely a year under his belt as proprietor of his first restaurant Graffiato, Isabella opened up Bandolero in May in the heart of Georgetown on M Street. A chance meeting with Jonathan Umbel, owner of Tackle Box and Hook, the restaurant that occupied the space until a fire in spring 2011 shut it down, gave Isabella the opportunity to realize one of the projects that had been percolating in his evidently fertile imagination. With the financial backing of Pure Hospitality LLC, Isabella was able to bring to life his vision for the prime location.

For Graffiato, Isabella tapped his Italian-American heritage and his considerable experience with continental and Mediterranean cuisine (also see Graffiato dining review in the September 2011 issue of The Washington Diplomat). For Bandolero, he turned to another much-loved cuisine that he thought best suited the location — tacos and margaritas — interpreting classic Mexican through his own particular contemporary filter.

In putting together the menu for Bandolero, Isabella stuck to his signature small plates, an approach that’s become increasingly popular in the economic downturn. The menu is still divvied up into starters, soups and salads, tacos and enchiladas, raw bar, traditional dishes and sides. But the breakdown seems more a convenience for finding things than anything else, as all the dishes are pretty much equal in size and potential importance — with treasurers hidden throughout. 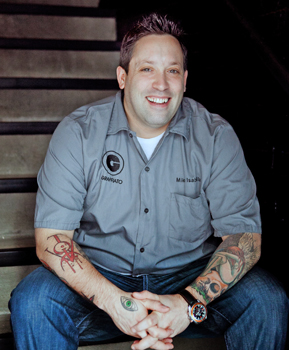 Mike Isabella of “Top Chef” fame has become a force to be reckoned with on the D.C. dining scene, with two recently opened concept restaurants, Graffiato and Bandolero, and two more in the works, the Greek-themed Kapnos and a sandwich spot called G.

Isabella has said Bandolero is his foray into modern Mexican cuisine, which means diners should not expect typical Mexican flavor profiles. While some of the dishes hone closely to tradition, such as the enchilada rojo, a chicken-based version prepared with cascabel chile and Mexican chocolate, others seem to be a delivery system for something else entirely. The tuna taquito, for example, marries sushi-grade raw tuna with ginger, sesame and sweet potato in crisp malanga shells. Other than the shape, the tiny, refined delicacies bear little resemblance to the otherwise humble taquito. Likewise, the snapper tostada, an intriguing mixture of raw fish, charred mango, jicama, peanuts and mint, is a fusion of tropical influences rather than a pile of beans and other heavy ingredients that make up a typical tostado.

Isabella’s taco toppings reflect the same eclecticism. Wild mushrooms are paired with chipotle and marmelada over a small corn tortilla, while on the flour variety, thin slices of skirt steak are nestled atop refried beans, poblano-avocado sauce and salsa. But one of the best choices among the tacos is the suckling pig, featuring crisp strands of pork mixed with apple and habanero mustard.

Though Isabella eschews the trendy tableside preparation for his guacamole, it has all the color, taste and texture of a freshly prepared version. Here, the Mexican staple is mild, with a marked note of cilantro and raw onion that’s not overpowering. A more unusual spread alternative is the sikil pak, a thick paste of pumpkin seeds, orange zest and cilantro that’s served with thick masa chips and warm pork rinds.

For dipping, the queso fundido is a rich and flavorful choice. Ground chorizo sausage, poblano chile and sunny-side egg adorn a manchego cheese-based sauce. While reminiscent of the traditional version, this one is much more complex and intense.

The sides essentially function as sharing plates just as the other dishes do. While the rice and beans are quite ordinary, the yucca is anything but. Fried until crisp and served with citrus salsa and chipotle mayo, it is one of the best things on the menu — perfect in its simplicity. The fried sweet plantains have a similar appeal. Cooked almost until caramelized and served with crema and queso, they are thoroughly satisfying.

To round out the meal, Bandolero offers a short list of traditional desserts including flan, tres leches cake, chocolate tort, seasonal ice cream and sorbet, and coconut cookies. The tres leches is as dense and rich as a typical version but is jazzed up with tart mango sorbet. Likewise, the chocolate tort has added dimensions with a dense chocolate mousse and banana gelato.

Prosecco is on tap at Bandolero as it is at Graffiato, and in a nod to Margaretville, fresh house-made margaritas flow nightly. For more adventurous drinkers, Babcock has concocted a full range of margarita-inspired deviations such as the spicy sweet Casa En Fuego. Made of Patron Citronge, strawberry, lime and habanero-infused tequila, it’s not your house that will be burning with this drink. 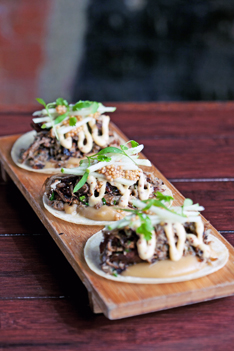 When it first opened, the music at Bandolero was loud. It’s been toned down recently, but with the Georgetown hotspot’s growing popularity (the restaurant fills up quickly after about 7 on most nights), the combination of background music and chatter may still bother some. The wait staff is agreeable and helpful and service is efficient, with dishes usually arriving quickly. Occasionally there have been staging problems, with dishes coming out all at once or interspersed with long delays; some have also arrived lukewarm.

The space itself is as offbeat and unconventional as the Mexican fare on the menu. Bandolero is decidedly edgier than Graffiato and perhaps more in tune with Isabella’s personal tastes. While Graffiato’s design is urban chic, Bandolero can be described as cemetery chic. Mexican Day of the Dead iconography is the central design premise behind the restaurant, which steers completely clear of the clichéd loud colors, primitive art and mariachi music of other Mexican restaurants in the area.

In fact, just about the only color here is black, tempered with some gray. Working with streetsense designers to help interpret his vision, Isabella has created a moody, dark interior. The bar is backed with tombstone-shaped arches, and actual cemetery fencing (refurbished to look old) divides the space. Painted black woods, reclaimed metal, animal skulls, murals of bandoleros (Mexican bandits), mismatched chairs and gothic-looking lighting fixtures kept dim give the place a grim but whimsical ambience. Though the design conceit is Mexican macabre, Bandolero also feels like an old Western movie set (perhaps even that of the 1968 Western “Bandolero!” starring Jimmy Stewart, Dean Martin and Raquel Welch) as reinterpreted by Tim Burton.

Though the décor is decidedly dark, Bandolero is a fun trip — good food, strong spirits and an upbeat atmosphere. It’s casual and not overly pricey by Georgetown standards (but be careful, the plates are not large and the bill quickly adds up), and it’s already attracted a large following — not surprising given Isabella’s popularity as a local boy made good. Isabella has deftly taken advantage of the opportunities that the celebrity spotlight has afforded him — and that burgeoning franchise has fortunately been to the advantage of D.C. diners.