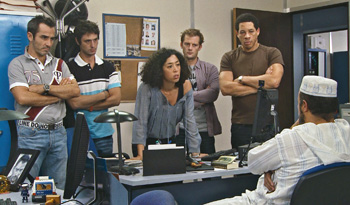 Also See:
‘The Lady’ and ‘The Island President’ and Repertory Notes

After watching a documentary about the Paris Police Department’s Children’s Protection Unit (CPU), Maïwenn requested authorization to shadow its police officers, both on and off duty. “Polisse,” written by Maïwenn and Emmanuelle Bercot, is derived from actual happenings witnessed by Maïwenn or told to her by CPU officers, resulting in a deeply layered script bristling with a sensation of authenticity and crisp dialogue.

Maïwenn plays a photographer whose new assignment is to live with and document the CPU, whose members face added emotional stress when trying to solve various crimes against child victims: A bunch of Romanians send children in their care into the streets to bring home the bacon as pickpockets. An Algerian father intends to arrange a marriage for his 14-year-old daughter, which may be accepted practice back home but is classified as statutory rape in France. And one well-connected man thinks he’s beyond the reach of the law, so he openly discusses incest with his children in front of the police, making an officer so upset that he hits the pervert off his chair.

Yet the CPU is looked down upon by other officers in the Paris Police Department, who don’t view the men and women of the CPU as real cops. Its dedicated officers must deal with self-esteem issues from their lower professional status. These greater burdens make the CPU’s officers particularly close-knit as they can only rely on each other when fighting criminals and bureaucrats. They toil hard when conducting investigations and interrogations, seeking the magical confession from suspects. Like all police officers, the strain of the job negatively impacts their personal lives, resulting in mental health problems, relationship breakups, intra-squad politics, etc. Yet it’s not always doom and gloom, as moments of humor lighten the unit’s mood. 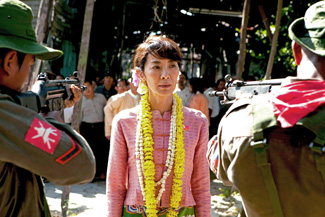 Yeoh’s subtle, powerful performance as Suu Kyi serves as the emotional anchor of “The Lady,” revealing glimpses of the democracy icon’s quiet resolve as a woman enduring heartbreaking personal sacrifices to serve her country. Perhaps in part because Suu Kyi serves as the face of a political movement based on the principle of nonviolent protest, Besson’s steady direction is an unexpected change of pace for a director best known for his fast-paced action flicks. Alas, the pace slows to a plodding level at times, a bit of a disappointment when the tension against Burma’s brutal military dictatorship offers plenty of opportunities for dramatic conflict. Nonetheless, “The Lady” is well worth seeing for Yeoh’s standout turn and its fascinating true tale. Rebecca Frayn wrote the epic script based on interviews with insiders of Suu Kyi’s circle over three years.

In 1947, when Suu Kyi was only 2, her father General Aung San was assassinated by his enemies in Burma, months after he signed the papers of Burmese independence from Britain. In 1989, she was living a comfortable life in Oxford, England, as a housewife married to an academic, Michael Aris (David Thewlis), and the mother of two boys. After her mother suffered a stroke, Suu Kyi returned to Burma to care for her dying parent and was swept up in the tides of history. As the daughter of Aung San, revered as the father of independent Burma, Suu Kyi accepted the call from her people to lead their nascent democracy movement.

She suffered house arrest for a total of 15 years between 1989 and 2010, making her the world’s most famous political prisoner, particularly after she won the Nobel Peace Prize in 1991. That honor was the result of a nomination campaign engineered by her husband Michael in an effort to raise her international profile, a stature that might better ensure her safety in Burma. Suu Kyi’s years of imprisonment were not the only sacrifice she made for her people. She refused to leave Burma, afraid the government would never let her return. As such, she saw her husband and sons only when the Burmese government granted them visas, requests that were often repeatedly denied, including when Michael was dying of cancer.

After the film’s end, Suu Kyi’s story is still being written as history in the making. When Clinton traveled to Burma last year for the first visit by a U.S. secretary of state in more than 50 years, she met with Burmese President Thein Sein as well as with Suu Kyi, General Secretary of the National League for Democracy (NLD). On April 2, Burma’s official electoral commission verified her election to the Burmese parliament’s lower house, officially making her the leader of the opposition, a role she has unofficially filled for 23 years. 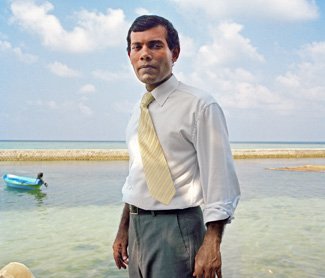 Mohamed Nasheed, the recently ousted president of the Maldives, campaigns to raise awareness of climate change in “The Island President.”

American director Jon Shenk (“Lost Boys of Sudan”) initially set out to make an environmental documentary with his compelling film “The Island President,” a warning against the dangers of global warming. The idea was probably something in the vein of Davis Guggenheim’s Oscar-winning “An Inconvenient Truth,” a documentary narrated by former U.S. Vice President Al Gore.

Of course, changing environmental policy usually involves politics, but the political intrigue in the background of “The Island President” has made a sudden leap to the forefront due to current events. The result is a real-life political thriller about the charismatic former president of the Maldives, Mohamed Nasheed, frequently known as the Mandela of the Maldives.

Since the late 1970s, dictator Maumoon Abdul Gayoom had ruled the Maldives for almost 30 years. Nasheed, one of the founders of the Maldivian Democratic Party, served as an opposition leader, causing him to be jailed more than 20 times and tortured as a political prisoner. Eventually, the pro-democracy movement succeeded in establishing free elections, which Nasheed won in October 2008, defeating Gayoom in the second round.

Shortly after Nasheed was elected, his foremost mission was to spread the word globally about his island nation’s potentially short shelf life. Comprised of some 1,200 islands, the Maldives has one of the world’s lowest elevations of any country. Nasheed’s homeland would be submerged and inhabitable after a rise in the surrounding seas of only three feet, a definite risk given the documented rising sea levels in recent years attributed to climate change.

The filmmaker’s unfettered, round-the-clock access to the 2009 Copenhagen Climate Summit provides a gripping look at Nasheed’s determined mission to try to save his country. He pleads with the world’s most powerful leaders, who have many more resources at their disposal, to take the tough steps necessary to reverse the literally rising tides of global warming. In a sense, the Maldives is the canary in the coalmine. If the minor-league nation-state dies a natural death, it might be too late to save higher-profile locales like Tokyo and Mumbai, which would be next on the hit list.

Alas, Nasheed didn’t get very far at Copenhagen, which was largely a bust. And he’s now lost his official platform to broadcast his seemingly quixotic message. On Feb. 7, 2012, Nasheed resigned as president after weeks of opposition protests in conjunction with most of the military and police. The following day, he claimed that he had been ousted in a coup d’état and forced to resign at gunpoint by security officers. He has since been lobbying the international community to support early elections in the Maldives, linking the fight for democracy to his ongoing crusade against climate change.


Wow, has it already been 10 years? The 10th Anniversary AFI / Discovery Channel Silverdocs Documentary Festival (June 18-24) celebrates what has grown to become called the “preeminent documentary festival in the U.S.” (Screen International), the “premiere showcase for documentary film” (Hollywood Reporter), and “non-fiction nirvana” (Variety). Some 27,000 attendees are expected to view films from more than 60 countries at the seven-day film festival, which will be accompanied by a five-day professional documentary filmmaking conference. Silverdocs is based in Silver Spring, Md., largely at the AFI Silver Theatre.

“The Tales of Jan Svankmajer” (May 26-June 10) provides a retrospective of the Czech avant-garde animator, who was influenced by early 20th-century Central and Eastern European animation. In turn, the registered member of the Czech Surrealist Society has influenced modern filmmakers like Terry Gilliam, Tim Burton, and Timothy and Stephen Quay.

Raj Kapoor and the Golden Age of Indian Cinema

The Freer Gallery of Art and AFI Silver Theatre join forces to present the series “Raj Kapoor and the Golden Age of Indian Cinema” (through June 28), which looks back at 13 films by legendary Bollywood actor, director, and mogul Raj Kapoor.