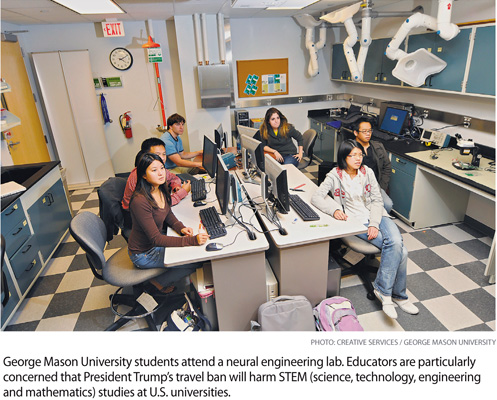 By now, we’ve all heard the stories of students unable to return to the United States after President Donald Trump’s hastily issued Executive Order 13769 on Jan. 27 barring travelers from seven largely Muslim countries from entering the United States. For instance, there was the Sudanese Stanford University student who was detained at JFK International Airport in New York, and an Iranian Ph.D. candidate at Yale University who was left stranded in Dubai.

We also know about the replacement order, 13780, which Trump signed March 6 and which removed Iraq from the original list of affected countries — Iran, Libya, Somalia, Sudan, Syria and Yemen. And we know about the legal actions taken against both travel bans that have blocked their enforcement. But what we don’t know is what residual effect they will have on American universities.

“We’re still unraveling exactly what the damage is or will be,” said Jill Welch, deputy director for public policy at the National Association of International Educators (NAFSA). “What the schools are also reporting is that it’s not just the six or seven countries. Other students are concerned they’ll be next, and they’re also concerned about what other policies might be put into place.”

Titled “Protecting the Nation from Foreign Terrorist Entry into the United States,” Trump and his team say the ban is a necessary measure to prevent terrorist attacks. “Three of these nations are state sponsors of terrorism,” U.S. Attorney General Jeff Sessions has said in defending the controversial order. “The other three have served as safe havens for terrorists … countries where governments have lost control of their territory to terrorist groups like ISIL [Islamic State] or al-Qaeda and its affiliates.”

The administration has offered scant evidence, however, as to why the seven (now six) barred nations pose a particular threat — or why other nations whose citizens have been involved in attacks on U.S. soil (such as Saudi Arabia and Pakistan) were excluded. The White House also faces the difficult task of proving in court that the order does not constitute a blanket ban on one religion.

In addition to suspending entry of the six predominantly Muslim nations for 90 days, the order has put the entire U.S. refugee resettlement program on hold for 120 days until more extreme vetting can be put into place.

Education experts say that although national security is of the utmost importance, the ban presents a threat to the U.S. higher education system.

Already, the number of international students applying to American educational institutions is down by 40 percent for fall 2017, according to a survey by the American Association of Collegiate Registrars and Admissions Officers (AACRAO). Not surprisingly, the largest decline came from the Middle East. Researchers also found a dip in applicants from India and China, which currently make up nearly 50 percent of international student enrollment in the U.S. (On the flip side, 35 percent of schools reported an increase in international applications, while 26 percent reported no change.)

Although the revised order clarifies that current visa and green card holders are exempt from the ban, it still prevents new visas for the six nations from being issued. Moreover, the lingering air of uncertainty over Trump’s immigration policies is forcing many international students to rethink their options. Respondents to the AACRAO survey cited concerns that the U.S. was becoming less welcoming to foreigners and fears that Trump might introduce additional visa restrictions in the future.

“The key thing here is the trickle-down effect of this ban on other Muslim-dominant countries is quite significant,” said Rahul Choudaha, principal researcher and chief executive officer of DrEducation, a U.S.-based global higher education research and consulting firm. “Many students, especially at the master’s level, are driven by opportunities, opportunities like internships, [to] get some work experience before they consider going back. If the whole policy rhetoric is moving toward an anti-immigrant and anti-international student approach, then it can raise concerns about finding those experiential opportunities.”

Nationwide, international students make up only 5 percent of U.S. college enrollments, but as IIE notes, that still totals around 1 million students. Moreover, NAFSA found that these students — many of them graduate students in electrical engineering and computer science — contributed almost $33 billion to the U.S. economy last year and created or supported more than 400,000 U.S. jobs. One more statistic to consider: Nearly a quarter of the founders of the $1 billion U.S. startup industry first came here as international students, according to the National Foundation for American Policy.

That’s why in February, 17 American universities, including all eight Ivy League schools, filed a legal challenge to Trump’s order, arguing that it endangers “their goals of educating tomorrow’s leaders from around the world.” Beyond hurting their bottom line, universities fear the ban could put them at a disadvantage in the global race to attract top minds in science, technology, business, medicine and other critical fields.

“Knowledge is certainly not something that is contained to borders,” Welch said. “When these kinds of things [bans] happen and it sends a shockwave around the world of concern about whether America has lost its identity as a nation that has welcomed immigrants, it causes this effect at a very time when other countries are competing and marketing to and creating immigration policies around making sure that they attract students.”

In Washington, international students are a vital part of not only the higher education community, but also the general economy. They bring in $438 million a year, and that’s not just in tuition, but also housing and spending, and they support or create about 5,000 jobs, a NAFSA report states. The George Washington University (GWU) alone brought in $192.6 million from international students during the 2015-16 school year.

This area is comparable to Boston in terms of the high concentration of top-ranked universities, Welch said, and the international student population is crucial. Many of them have schools of foreign policy that cater specifically to an international population.

“Generations of foreign policy leaders have always agreed that one of the greatest foreign policy assets we have are international educational exchanges,” Welch said. “If we were to lose out on particularly a whole region of people being interested in studying in the U.S. or shrinking dramatically due to the chilling effect of the executive orders, you would see a real long-term deficit in relationship building for foreign policy. The same is true for trade. Business relationships often benefit down the road from the ties and the cultural understanding that’s built between students while they’re here at the graduate or undergraduate level.” 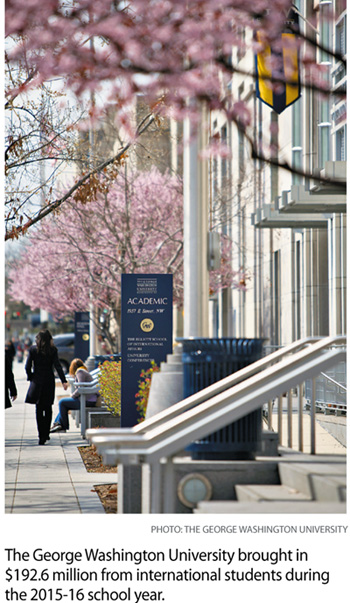 Washington-area universities began reaching out to students shortly after Trump signed the first executive order. GWU reported in January that the first ban affected 73 of its students, while 21 American University students were affected, according to Washingtonian magazine.

“We are an institution that values the contributions of our international students, staff and faculty, and we are deeply committed to interreligious dialogue and providing a context in which members of all faith backgrounds are welcomed and encouraged to practice their faith,” Georgetown University President John J. DeGioia said in a Jan. 29 message. The school established and regularly updates a webpage dedicated to frequently asked questions related to the travel bans to help students navigate this fluid situation.

Johns Hopkins University President Ronald J. Daniels referred to his father’s escape from Nazi Germany in 1939 and his childhood in Canada in addressing the first executive order. “In this historic moment, when universities such as ours find our fundamental mission imperiled by an executive order that erodes our core values and the founding principles of the nation, we cannot stand by,” Daniels wrote.

Johns Hopkins was one of the 17 universities nationwide that filed an amicus brief in support of legal actions to stop the travel bans.

Ángel Cabrera, president of George Mason University in Virginia, penned an opinion piece in the Washington Post on March 21 making the case for open borders in education. “The perception of openness is just as important as the legal reality of openness,” Cabrera wrote. “Whenever the United States is seen as less open and welcoming to people and ideas, this dynamic source of innovative talent suffers.”

What Universities Can Do

A lot of the potential fallout from these orders is out of universities’ control, Choudaha said, but there are two main outreach approaches they can take. First, they can get in touch with students from the affected countries — or any country — who have already applied or otherwise expressed interest.

“Building confidence in those students is the most important thing a university can control and can do,” Choudaha said. “Explaining to them that whatever is happening at this point in time in the political environment, distilling it down to what’s impactful on the students, is a very important communication approach.”

The other tactic is to use alumni as spokespeople for the school. “Leveraging alumni to push out that message with the larger community, which they are connected with, is very important,” he said. “International students, many of them go back [home], but if they are in the U.S., they become a very important adviser.”

Second, international students are often the best students in their countries, so their presence here enriches the quality of learning.

“If you have U.S. students who aren’t exposed to different perspectives, it leaves the risk of growing up with the idea that America is all there is,” she said.

And third is their economic contribution, Welch added. Beyond helping the local economy, international students’ tuition, which can be three times that of domestic students, helps offset state education budgets, she noted.

What’s more, the effect of the ban could hurt the job market, Choudaha added, because many international students use their study here as an access point to working here, particularly in the engineering and foreign policy fields. “Many students are also coming from diverse countries specifically to study those fields, and if this is happening, it can also affect their employability in the future,” he said. “Students may start questioning their return on investment if these kind of things create a lot more resistance and an unwelcoming stance for a large number of students.”

But “we need that kind of global pipeline to really maximize the experience of learning in the classroom and in the workforce,” he added.

There’s no doubt that the bans have put universities and both current and prospective students on edge, but there is a domino effect happening that’s only just beginning. Welch said schools will have a better grasp of the impact on enrollment in the fall, when students actually show up for class, but the full results may not be felt for a long time. She applauds the work that universities, colleges, nonprofits, associations, courts and elected officials are doing to stop the ban.

“While the chilling effect is very real, it’s also true that there’s a part of America that’s working very, very, very hard to ensure that we remain open,” she said. “We need policies that acknowledge what kind of nation we are.”