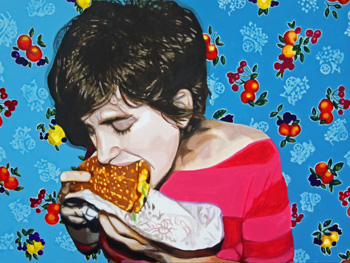 On the surface, the two exhibitions at the Inter-American Development Bank (IDB) Cultural Center and the Organization of the American States (OAS) Art Museum of the Americas seem different — in size, intent, scope and content. But after some thought, tantalizing similarities and connections begin to break through.

At the IDB, “Perceptive Strokes: Women Artists of Panama” is a broadly panoramic view of women artists in Panama, a diverse vista of the best and the brightest over the years. “Un Lugar Sin Reposo | A Place With No Rest: Photography by Luis González Palma” at the Art Museum of the Americas is a sharply focused, even disturbing exhibition on the theme of identity and the power of the simple gaze and body language within swirling cultural and societal subtexts.

Both shows also have official underpinnings. The Panama show coincides with the IDB’s annual meeting, held this year in Panama, while Palma’s exhibition runs alongside the 43rd session of the OAS General Assembly in Antigua, Guatemala. (Palma will also speak about his show at the IDB on May 16.)

You can also connect them by the women. Obviously that’s the focus of the Panama exhibit, but they also appear in Palma’s deeply haunting work, which examines, among other things, how women are looked at (and look back) in Guatemalan society.

“Perceptive Strokes” is of course an exhibition of works by women artists, and perforce becomes an exhibition that’s also about women artists, in a particular place and environment at different times. In “A Place With No Rest,” Palma uses photography (painted at times, and abetted with the use of other materials) to show Guatemalan society and history as a place of secrets, about power, class, sex and female imagery — secrets that have to be deduced from glances, stares and a willingness to look beneath and beyond an image. 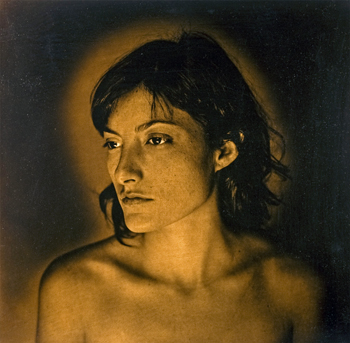 At the Art Museum of the Americas, Guatemalan photographer Luis González Palma examines the power of facial expression and body language in his work.

There is a temptation — a trap, really — to look at Latin American countries as being similar or, worse, the same. It’s a common trap because the commonalities are there and shared, but they are also different in almost every case, sharply so. Palma scratches the surfaces of these complexities, from class structure and colonization to political revolution and religious devotion. It’s a lot contained in what’s basically a small show, but the themes, with the addition of such matters as gender issues in art, can also be found sprinkled throughout the show about Panamanian women artists. 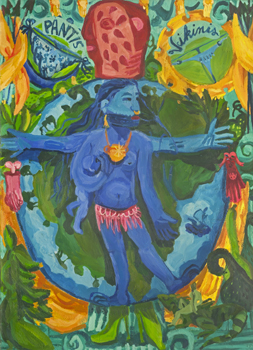 Victoria Suescum’s “Pantis Vikinis,” is among the works by Panamanian women in “Perceptive Strokes” at the IDB Cultural Center.

“Perceptive Strokes” is a freewheeling exhibition in which traditionalists mix freely with the cutting edge, the social and political commentary bleeding into their art. The 22 artworks — an array of paintings, photographs, sculptures and video art from the 1920s to the present that were selected by Panamanian curator Monica E. Kupfer — reveal how a varied group of female artists have experienced and represented significant geopolitical events in the nation’s history.

The experiences are indeed revealing. As soon as you walk in, a mountain of 200 seemingly disembodied, discarded breasts tumble out in an installation that radiates with ideas about women’s body parts. Nearby, photographer Sandra Eleta’s stunning portrait “Catalina” stops you in your tracks with a powerful, wise woman whose skeptical gaze reveals little and hides many secrets of her own.

The exhibition travels through time. Coqui Calderón’s kinetic painting “Black Friday” captures a peace demonstration in swirling white crushed by police; Alicia Viteri’s “The Enamored Minister” wraps up Latin American — and Panamanian — issues of power in uniforms and gowns, struggling with each other yet intertwined.

There is a lot of music to be heard in this exhibition. Some of it, like Donna Conlon’s video, strikes a puckish note, while Olga Sánchez’s sweetly fleshy nude echoes a morning song rising after a long night of lovemaking.

“A Place with No Rest” is a more jarring dream-presentation of oppressive forces — the ropes and ties that bind native and indigenous peoples to their conquerors, the women who are adored, revered, desired and hidden — and the ambiguous but startling looks on all those faces.

“Here, we are talking about the role of the artists in such a society,” said Fabian Goncalves, exhibit coordinator at the Art Museum of the Americas. “It is about secrets — he is in one section dealing with family, intimate matters, relationships — the church, theology, Christian imagery mixing with Victorian disguises. You see these series of daguerreotypes, called bodyguards, and those faces and those men come from the bottom or lower strata, but they have power, they have weapons.”

Palma explores darkness by sprinkling photographs with gold and other bright material, illuminating the secrets that lurk underneath and making iconography out of dreams. In this way he’s like a writer — metaphors, after all are meant to hide and illuminate.

Like “Perceptive Strokes,” he sheds light on a society that is more than meets the eye.

Un Lugar Sin Reposo | A Place with No Rest