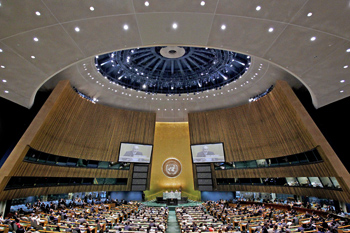 Colonel Muammar al-Qaddafi is dead. Fidel Castro, now 85, spends his days writing cryptic haikus about yoga and edible plants. And Hugo Chávez, who has undergone three cancer-related operations in the past year, is busy campaigning with actor Sean Penn in advance of the upcoming Venezuelan presidential election in October. So which world leader is going to make waves with an incendiary speech at this year’s U.N. General Assembly (UNGA) in New York?

The smart money is on Iran’s president, Mahmoud Ahmadinejad, whose 9/11 conspiracy theories and anti-U.S. and Israel diatribes at the UNGA in 2010 and 2011 sparked outrage and walkouts from a host of delegations. According to press reports, Ahmadinejad plans to deliver a report on a Non-Aligned Movement conference held in late August in Tehran at the UNGA, which kicks off Sept. 18 this year. But most Iran watchers predict that he’ll also have plenty to say about the U.S. role in the Middle East, his country’s nuclear program and whatever else strikes his fancy.

The year 2012 will mark the 67th UNGA gathering of world leaders from the 193 U.N. member states in New York. In the past, the ministerial sessions that kick off each UNGA season have been filled with colorful characters, dramatic speeches and, at times, silliness. Leaders are supposed to limit their speeches to just 15 minutes, but the rule is widely ignored, much to the chagrin of many junior diplomats tasked with taking notes and reporting on the at-times meandering speeches.

At its annual meeting in September, the U.N. General Assembly is sure to take up the issue of Syria — as it did when it adopted a resolution in early August, above, condemning the use of heavy weapons by Syrian authorities and urging all sides to cease the violence. But with the Security Council deadlocked over Syria, it’s doubtful the General Assembly will be able to do anything more than pass toothless resolutions.

Fidel Castro, who once reportedly kept live chickens in his hotel room in New York during a General Assembly visit, holds the modern record for longest UNGA speech, at four and a half hours, set in 1960. But Col. Qaddafi delivered what is widely regarded as the most bizarre speech in UNGA history in 2009, with a rambling 90-minute screed in which he suggested that swine flu was created in a laboratory and called for investigations into the deaths of J.F.K. and Martin Luther King Jr.

His plan to erect a traditional Bedouin tent in New Jersey created a stink, as did Chávez’s 2006 assertion that the U.N. chamber smelled like sulfur in the wake of George W. Bush’s speech there. But while the most outrageous speeches make the headlines each year, the brief ministerial phase of the UNGA is a kind of diplomatic World Series, a can’t-miss event where a huge amount of business is conducted behind the scenes.

While heads of state and foreign ministers make their way to New York in mid-September every year for the start of the UNGA session, the wrangling over schedules and agendas begins weeks or even months before, as diplomats from all over the world try to determine how to spend their precious time in New York.

“The speeches aren’t the most important part of UNGA,” said François Rivasseau, deputy head of the Delegation of the European Union to the United States, who has attended numerous UNGA sessions over the last 20 years. “The most important part happens in the bilateral meetings that take place on the margins of the assembly.”

But the delicate diplomatic dance of scheduling these meetings is a drama in and of itself. The United States and other big geopolitical players are inundated with meeting requests from countries large and small, and there is no way to accommodate them all in the one-to-two-week time span that most leaders spend in New York.

As the desk officer for Chad and the Central African Republic (CAR) at the State Department, I witnessed this dynamic firsthand in 2006, when CAR officials were dismayed to learn that the highest-level meeting they could secure for their visiting head of state, François Bozizé, was a new, politically appointed deputy assistant secretary of state (DAS) for African affairs. Since this DAS had no experience with the country, I, as a lowly desk officer, was offered the chance to take the lead in the meeting.

That kind of diplomatic mismatch isn’t necessarily unusual, given the fact that leaders from 193 countries converge on New York and all of them want access to U.S. officials. The hurt feelings that sometimes result can damage bilateral relations, which is partly why foreign ambassadors posted in Washington feel pressure to deliver high-level meetings for their visiting dignitaries.

“I try to explain that there is no disrespect, but it’s just physically not possible for the secretary of state to meet with all of her counterparts,” said Ambassador Claudia Fritsche, a veteran of more than a dozen UNGA sessions who has been Liechtenstein’s ambassador to the United States since 2002. “They have to prioritize and meet with countries where they have very, very serious issues. The rest of us just have to accept that we are received at a different level, and this is not always easy to explain.”

James Kariuki, a political counselor at the British Embassy in Washington who is a veteran of six UNGAs since he joined the Foreign Office in 1993, says the scheduling is an “incredibly complicated bit of diplomatic protocol.”

“There is a fair bit of jostling over who gets to see who,” he said. “You’ll see meetings between leaders of countries that don’t get on very well, people who wouldn’t go to each other’s countries meeting in the corridors at the U.N. But in the end you can’t see everyone.”

Veteran diplomats describe the ministerial phase of the UNGA as a marathon of meetings, speeches and horse-trading over appointments and votes that can be exhausting, stressful and also exhilarating. 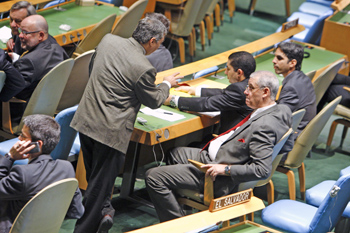 Delegates are pictured in conversation shortly before a General Assembly meeting to review the U.N. Global Counter-Terrorism Strategy. Weeks before the U.N. General Assembly convenes each September, diplomats wrangle over schedules and agendas to determine how to best spend their time in New York.

This year, the UNGA madness got off to an early start with an unusual row between supporters of Lithuania and Serbia, two nations vying for this year’s rotating UNGA presidency.

Russia backed Serbia while a host of Western countries backed Lithuania. Ultimately, the matter was decided in the first secret ballot for the largely ceremonial UNGA presidency in more than 20 years, with Serbia narrowly prevailing by 14 votes.

Kariuki says that even without this kind of drama, the affairs can be rewarding, particularly for junior-tier diplomats.

“It can be exciting as a young diplomat during the peak of the ministerial week to find yourself in the same room as world leaders,” he said.

Ambassador Fritsche, who prior to coming to Washington served as her country’s permanent representative to the United Nations since 1990, said that having an opportunity to listen to and meet the Dalai Lama and Nelson Mandela at the UNGA were two of the more memorable moments of her career. But Kariuki said the excitement level drops off dramatically after the ministers go home and UNGA enters the committee phase, where the U.N.’s six committees (Disarmament and International Security; Economic and Financial; Social, Humanitarian and Cultural; Special Political and Decolonization; Administrative and Budgetary; and the Legal Committee) hammer out the wording of hundreds of resolutions.

“What’s brutal is when the ministers go home and you reach that committee stage, and you’re left haggling over paragraph 23 of a resolution on globalization and you’re not really sure it’s going to change the world but you’re stuck there in the U.N. bubble,” he said. “There are moments when you feel like you’re making a difference and then there are a lot of moments when you’re stuck in the basement of the U.N., not having seen light all day.”

The only thing worse than being stuck in the basement haggling over resolution language may be relegation to note-taking duty for ministerial speeches at the UNGA. Rivasseau said you can tell a lot about a country’s place in the world not so much by how full the room is when their representative speaks but who is there to listen.

“If a lesser-known figure or someone from a smaller country is speaking, you’ll see a lot of junior-level diplomats in the room,” he said.

Kariuki said that diplomats “vote with their feet,” while Ambassador Fritsche noted that at least a few of each delegation’s six seats should be full for every speech so as to avoid embarrassment.

Of course, corralling a warm body to listen to speeches can be a chore by the end of the ministerial phase, when everyone’s just about had their fill of rhetoric, and the issue is particularly acute for the delegations that have prime seats in the first row. The seating is alphabetical, but each year a name is also picked out of a hat and that lucky country — last year it was Turkmenistan — gets a front-row seat.

Diplomats surveyed for this story said that Syria would be item #1A on the agenda at this year’s UNGA, particularly in light of former U.N. Secretary-General Kofi Annan’s resignation as special envoy to Syria. The global economic crisis and the situation in the wider Middle East will also be at the forefront, alongside less headline-grabbing issues such as water and food security and women’s empowerment.

The sheer list of agenda items, in fact, can be mind-numbingly long and at times bewildering. Though the talks generally focus on hard-hitting global issues such as HIV/AIDS, sustainable development, poverty, human rights, macroeconomic policy, disarmament, and debates over the Israeli-Palestinian conflict and war in Afghanistan, there are a number of inane items as well. A discussion on the Comorian island of Mayotte, Mongolia’s nuclear-weapons-free status, “Sport for Peace and Development” and “Harmony with Nature” are among the more obscure topics buried among more than 150 agenda items on the schedule.

So will anything actually get done, or is the UNGA just a high-profile dog and pony show for world leaders and diplomats? Fritsche, Rivasseau and Kariuki all say that, contrary to popular opinion, plenty of business gets done at the UNGA.

“We are all trying to spare taxpayer money and it’s much more economical to go to New York because you are sure to be able to meet with many ministers in one place,” said Rivasseau. “Rather than fly to 20 different places, you can see 20 people all at once.”

But for some D.C.-based diplomats, the multilateral environment in New York takes some getting used to.

“In Washington, embassies compete,” said Fritsche. “All of us have been sent here to establish the best possible relations with the host country, the United States, in order to represent our interests in the best possible way. So we all try to be visible, to attract the attention of the U.S. government, the Congress, the media. At the U.N., there are 193 members. No matter where they’re from, they need to work together to get things done. So we work together day and night.”