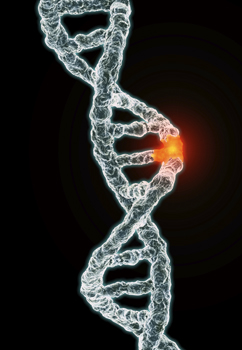 Last week, I found out that I’m a carrier for a genetic variant (what’s commonly called a “mutation’) known as Alpha-1 Antitrypsin Deficiency. I have one mutated and one normal copy of a gene called SERPINA1, which produces a protein that protects the body — especially fragile lung tissues — from the effects of a powerful enzyme released by white blood cells. About 100,000 Americans have this deficiency, according to the national AAT registry.

AAT deficiency, which I’d never heard of before last week, basically means you’re at increased risk for lung problems. (It’s also linked to liver disease.) It’s particularly a problem for people who smoke, and I’ve always been a militant anti-smoker and have never noticed any trouble with my lung function.

The diagnosis explains a lot about my mom’s health history, though. The mutated gene had to come from one of my parents, and from earliest childhood, my mom could remember calling out to friends, “Wait for me! I can’t catch my breath!” She had multiple bouts of pneumonia in adulthood, one of which contributed to her death from dementia in 2008 at the age of 74. I’m guessing — since we obviously can’t find out now — that she may have had two mutated SERPINA1 genes.

I got all of this information not from my doctor, but because my husband and I decided to give ourselves a rather unusual present for our anniversary this year: We got our genomes sequenced. This would have been virtually impossible for us to do as individuals just 10 years ago, and prohibitively expensive even five years ago. But this spring, Evan and I ordered genome kits from a company called 23andMe.com, a Web-based personal genome service launched in 2008 by biotech analyst Anne Wojcicki, wife of Google founder Sergey Brin. (Time magazine named it “invention of the year.”) The cost: $299 each.

Getting our personal genetic code was simple: Each of us spit into a specially designed tube sent by 23andMe, sealed it up, put it in a pre-labeled box, and sent it back to them. Less than three weeks later, we got emails notifying us that our genomes had been analyzed.

Logging onto 23andMe’s Web site, we could each read about our genetic risk for more than 200 diseases, our carrier status for some 50 genetic mutations (including AAT deficiency), our pre-programmed likelihood to respond to certain drugs, and other traits like whether or not we flush in response to alcohol and what kind of ear wax we have. (No, really.)

In addition to the personalized genetic test, 23andMe has launched a campaign to unearth the genes behind Parkinson’s, inviting anyone diagnosed with the disease to submit a DNA sample for research — and in return, participants get the company’s services for free.

It remains to be seen if casting such a wide net to learn more about diseases such as Parkinson’s yields any tangible results. For now, the majority of people who use 23andMe and other such services are, of course, curious about their own genetic makeup and what it reveals about them.

Most of what we found out was intriguing, but not important. It doesn’t really matter that I’m a fast caffeine metabolizer, or that I have a very slightly increased risk of developing Crohn’s disease. But with a family history of dementia and other neurological disorders, I have to say that I was relieved to learn that I don’t have any known genetic risk factors for Alzheimer’s or Parkinson’s disease — in fact, 23andMe’s report says that my genetic risk for both these conditions is substantially less than average. Of course, that’s based only on the genetic variants that 23andMe tests for — 10 markers for Parkinson’s and one for Alzheimer’s. This doesn’t definitively establish that I’ll remain free of either disorder as I age.

I also found out that I have an increased risk of exfoliation glaucoma, where a whitish material that looks like dandruff builds up on the lens of the eye. Most people have about a 1 percent lifetime risk, while mine is 2.9 percent. That’s not a huge worry, but it’s enough to suggest to me that I should stick carefully to the Glaucoma Foundation’s recommendation of an eye test every one to three years between the ages of 40 and 54 — maybe closer to the every year side of the equation.

But the big thing on my mind is this AAT deficiency. People with my form of the mutation (there are several, with the most severe being those who inherited two mutated genes) are usually fine unless they smoke, I’ve learned on the discussion forums that 23andMe offers. But even those with a mild mutation who are totally healthy, like me, are advised to keep a close eye on liver and lung function.

So I’m going to need to get in to see a primary care provider to get some baseline testing. And Evan and I will also have to talk about genetic testing for our two biological children, who could also be carriers of the deficient gene (although not the most severe form, with two mutations, because Evan is not a carrier).

This isn’t exactly what I expected when I sent the test in — which is kind of the point. You don’t really know what’s hidden in your genes, and what’s there can surprise you. I got “good” news about neurologic disease risk, but surprising “bad” news about something I’d never even heard of before.

That doesn’t mean I wish I hadn’t taken the test. Quite the opposite. Because early detection of lung and liver symptoms in someone with AAT deficiency can help stave off more significant deterioration, I’m glad I know about it now — for myself, and possibly for my kids. I can also pat myself on the back about how fiercely I’ve avoided cigarette smoke and recommit myself to vigorous exercise that builds my lung capacity.

Anyone who gets his or her genome sequenced could get similarly surprising news, positive or negative. While Evan and I did it mostly for fun, the fact is that your genome isn’t a party trick. Learning information about your genetic risk of certain illnesses can be serious business. Some people want to know the answers to questions like these, and some prefer to keep such information at arm’s length. Only you know which one you are.