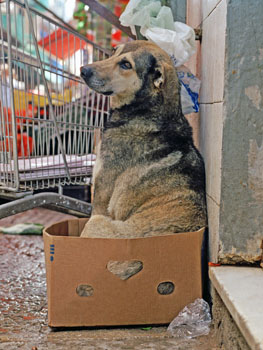 Charlotte Dumas photographed the burial horses of Arlington National Cemetery for a recent project on display at the Corcoran Gallery of Art, which is also featuring her previous work depicting racehorses tethered to hippodrome stalls, gray wolves on Scandinavian nature preserves, and the stray dogs of Palermo — as seen in photographs such as “HSH, Palermo, Sicily.”

From the stray dogs of Palermo, Italy, to search and recovery dogs of 9/11, Dumas has photographed animals in various contexts and in countries around the world. She typically works in series, creating portraits of groups of animals characterized by their utility, social function or relationship to people.

“Charlotte Dumas: Anima” at the Corcoran Gallery of Art is Dumas’s first solo exhibit in the United States and the fourth for “NOW at the Corcoran,” which presents new and site-specific work by emerging and mid-career artists.

Climbing the stairs to the Corcoran’s Rotunda gallery, visitors encounter a reclining white horse that takes shape against a dark background. His hooves are politely tucked into his broad chest, his ears alert, but his body relaxed. Up close, there is something very human about his expression. “Ringo” is one of the burial horses of Arlington National Cemetery, the subject of a newly commissioned series of portraits that is the centerpiece of the exhibit. 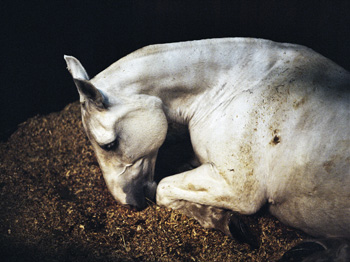 These horses carry the caskets of soldiers and presidents to their final resting places. Horse-led military funeral processions date back to the 18th century, when horse-drawn caissons of artillery were unloaded on the battlefield, often returning with fallen soldiers. About eight times a day, Arlington Cemetery’s burial horses lead funeral processions in teams of six. Funerals for high-ranking officers include a rider-less horse, with boots reversed in the saddle’s stirrups to symbolize that the fallen won’t ride again and is looking back on his family one last time.

In this solemn historic ritual, Dumas found an opportunity to explore “how we tend to use and regard animals for our own purposes, both literally and symbolically.” She photographed the horses at night, in their barn stalls, not in the midst of performing their formal duty. Yet the portraits capture the weight of sadness felt by a soldier’s mourning family, the burden borne by aging horses carrying a casket, and the distinguished honor of the duty they perform. Yet each portrait is uniquely expressive. The curved body of one horse suggests vulnerability; the rigid posture of another resembles a crisp military uniform.

Dumas photographs her subjects in their habitats. After hours of observation and quiet interaction, she gets as close as the animal will allow, positioning herself at eye level to establish intimacy, offering a different perspective to the viewer accustomed to looking at these animals from above or below.

Her work employs contrasts of shadow and light and is heavily influenced by the classical composition of Dutch Golden Age portraiture. These days, animals are more often the subject of cute Tumblr or BuzzFeed posts than of fine art, and in that sense Dumas’s images break with contemporary trends. 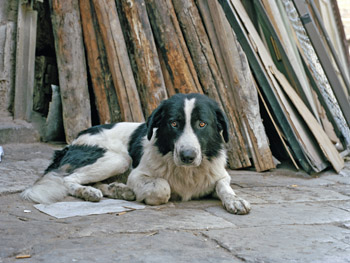 Viewed individually, the portraits of racehorses tethered to their stalls convey a sense of restraint. But seen as a group, the animals appear bound together, united by a single purpose, with a sense of strength and pride. 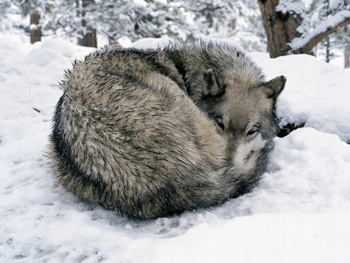 Dumas plays with perspective in her portraits of gray wolves as well. She is fascinated by the animal, which is both loathed as a predator and revered in folklore. Her portraits capture this duality; one portrays the lone hunter with a predatory glimmer in his eye, another conveys the intimate social bonds characteristic of these animals, showing a pack asleep in close proximity.

Like gray wolves, the stray dogs of Palermo roam free. For Dumas, these dogs exist in the space between family pets and their wild ancestors. They aren’t the property of humans, nor are they separated from us by forests or fences. Dumas sees the dogs as “part of the community, living among their human counterparts in a kind of equilibrium.” At first glance there is something sad about dogs living among trash on the streets, as though discarded. But the portraits also capture a certain confidence and dignity reminiscent of the free-roaming wolves.

Dumas’s portraits urge reflection on the bond between mankind and animals. Each of the animal groups she has chosen to portray is affected to some degree by humans. Some are domesticated, while others continue to roam free, albeit in dwindling numbers as their habitats disappear. Some represent the prospect of victory, others lend dignity to death, the ultimate defeat. Dumas describes animals as “witnesses to our existence.” In bearing witness to theirs, her portraits beg consideration of our own role in these animals’ stories.