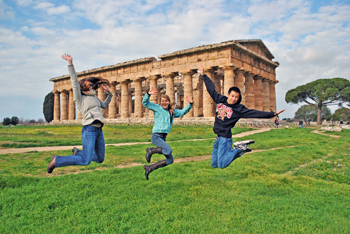 In 1976, when Ross Lewin was 16 years old, he left his Los Angeles home for the first time to spend the year in Hannover and Hamburg, Germany, as an exchange student with the program Youth for Understanding.

Decades later, he still recalls this experience “to see the world from outside of the U.S.” as “incredibly formative.” Eventually, it would also help shape both his worldview and career.

The University of Maryland has some 300 formal partnerships with universities and governments overseas and sent 2,200 undergraduate students abroad last year to study in nations such as Italy.

As the newly appointed associate vice president for international affairs at the University of Maryland, Lewin said he hopes to bring new international programs to the College Park campus “and transform the lives of students, the way mine had been.”

After earning his bachelor’s and master’s degrees from the University of California at Santa Cruz, Lewin earned his Ph.D. in German studies from Stanford University in 2000. He taught German literature on campus before moving into university administration. From 2001 until 2004, Lewin directed the honors study abroad program at the University of North Carolina at Chapel Hill.

He comes to the University of Maryland directly from the University of Connecticut, where he was executive director of the Office of Global Programs and director of the Office of Study Abroad. During his eight years at UConn, Lewin quadrupled student participation in global programs, particularly with minority students, and persuaded the university to form alliances with 23 world-class research universities.

“It’s an indication of the direction things are going — the scale of opportunities is greater than you can achieve operating independently or through traditional bilateral alliances,” he said of university partnerships.

And he has been proactive about developing ties with universities overseas. Recently, Loh joined the governor of Maryland on a trip to India and China, where he met with Chinese higher education leaders and visited seven universities; in India, he met with contemporaries at eight universities. Loh is now planning a similar visit to Israel in November.

The appeal of partnerships with universities in these countries is their “very strong interest in entrepreneurship and innovation” — a priority they share with the University of Maryland, Loh said.

“Globalization benefits Maryland and the U.S.,” he told us. “It keeps the University of Maryland competitive, and in a world economy, that’s ultimately what it’s all about.”

But the international reach of the University of Maryland is already far from small. It is the largest public research university within a 30-minute proximity to Washington, D.C., with 37,000 students, 12 colleges and schools, 9,000 faculty and staff, and an annual operating budget of $1.7 billion. As such, Loh said it is common for the campus to be visited by the education contingents of international delegations when they come to the United States, and “this benefits the University of Maryland in an enormous way.”

Yet international programs, emphasizes Lewin, who assumed his responsibilities in August, are “more than just sending students abroad” and “hoping for the best.”

He concedes that with some study abroad programs, students might not be studying as seriously as they would back home, but the experience should not be underestimated. 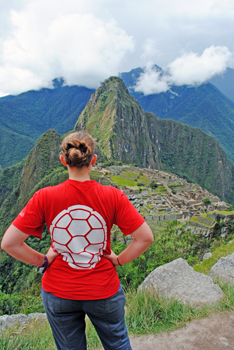 The University of Maryland has sent 2,200 undergraduate students abroad last year to study in nations like Peru.

It is possible to create “high-value programs,” but first it is important to think about the “intentionality of the program,” according to Lewin.

Asking questions such as what the expected learning outcomes of the program should be and what should students be achieving can guide the creation of study abroad programs, Lewin explained, and allow students to acquire valuable skills like language acquisition, cultural awareness and critical thinking abilities, not to mention personal growth and maturation.

Including opportunities for in-country internships and volunteering along with the academics is also key, Lewin added. When these practices are implemented, the study abroad experience is “transformative” and “extraordinary,” and becomes a critical component for helping students embrace global citizenship, he said.

Bolstering the study abroad initiatives is just one way Lewin is working to make the University of Maryland the “best globally networked university in the nation” and a hub of international education.

Another priority for Lewin in strengthening Maryland’s international offerings is to leverage the resources that come with the university’s prime location.

“What better location is there, when Washington, D.C., is your backyard?”

Lewin said he hopes to create internship programs for undergraduate students in Congress, the State Department and with nongovernmental organizations that focus on international issues. He also wants to work closely with the embassies in Washington to open up additional opportunities for students.

Lewin wants to explore other ideas such as creating a set of international summer schools at the University of Maryland that would attract students from around the world and focus on subjects of particular strength for the university, such as cyber security and conflict resolution. Lewin also noted that he would like to strengthen the university’s relationships with institutions in Africa and Latin America.

There are always challenges when you start a new position, but “this is a dream job for anyone in my field,” said Lewin. “The University of Maryland makes international education one of its highest priorities, has unbelievably rich programming in place, and is ideally located to pursue these goals…. My promise is to bring creativity, an open mind and commitment.”