Home The Washington Diplomat June 2010 Up in the Air 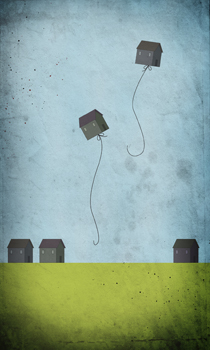 Home Values Up, But How Much Owners Can Recoup in Recovery?

Ever since the housing crisis erupted in full steam in 2008, homeowners across the region and the nation have all been asking the same questions: When will the value of my home go back up? When can I even think about selling or upgrading? And in some cases, will my house ever be worth what I paid for it?

Area industry experts have different opinions — mainly regarding timing — but they all agree on two things: First, the industry can only go up, and second, smart consumers should not necessarily want the market to reach the astronomical heights it reached about five years ago.

“Hopefully, it won’t reach the level it reached before,” said Michael Manfredi, a realtor based out of Annapolis, Md., with Keller Williams Select Realtors.

“We don’t want to see the huge jump followed by the big fall that we saw,” he said. “Because [the market] grew so rapidly, it caused the greatest drops, as well. What would be nice would be a gradual increase over a longer period of time.”

Neil Bacchus, a realtor with Long & Foster in North Bethesda, Md., agrees. “I personally do not believe that property values will be as high as they were any time within the next three to five years because those prices were quite inflated to begin with,” he said. “When it does recover, we are going to see a much healthier market, which is actually better for everyone…. To think we will revisit those exact prices anytime soon would be a mistake.”

Bacchus is hopeful that the housing environment will improve slowly but surely. “Things in the economy tend to go in cycles, and these cycles tend to repeat over the years,” he said. “When they change, it is usually in frequency or duration due to previous learning and adjustment to events.

“It will take awhile to regain what was lost,” Bacchus added. “We have to remember that when prices were at their highest, they were actually extremely overvalued.”

But what does that mean for people who bought their home when prices were peaking?

“It is very disheartening to realize that [your] home has lost a lot of value,” Bacchus admits, “especially if [you] owe more than it is currently worth…. This tends to make people cling to an ideal value they have in mind, and they don’t want to let go. It is psychologically difficult to let go. What people need to realize is that values will not be back to those levels anytime soon, if at all.”

To that end, Bacchus believes sellers need to adjust their hopes and expectations. “People need to understand that just because they used to be able to get a certain price for their homes, this does not mean they should expect to get the same price,” he said. “The value of a home is and has always been what a buyer is willing to pay for it.”

So when Bacchus lists a home for sale, he advises his clients accordingly. “I pride myself on being able to sell a home for the maximum price, but I never recommend that my clients price their home way above the value because I know what will happen. If the house is overpriced, it simply will not sell — which is bad for everyone.”

Rallying for a Repeat

But some realtors think it’s just a matter of time before the market peaks again. “History is just repeating itself, and the market will bounce back,” argues George Saab, president, realtor and mortgage broker with Saab Realtors in Vienna, Va. “It may not rebound as quickly as it has happened in the past; however, I predict that the market will stabilize and we will probably see a slight increment in price sooner than what we all believe.”

Saab’s company has been providing real estate and mortgage services since 1987, so he has seen the dips and peaks this industry can weather. “With banks and financial institutes sinking, the condition of the housing market has become volatile,” said Saab. “However, the principle stays the same, and people will continue to invest in real estate.”

Saab, who has personally invested in multiple foreclosure and other properties, pointed out that “real estate investment has always been one of the key profit areas for banks and other financial institutions.”

“Investing in a house has always been considered one of the safest ways to safeguard our money. Owing to this investment fundamental, people continued investing in real estate during the period between the late 1990s and 2005, even though the prices were reaching their all-time highs,” he explained.

“Housing prices will increase with time, and will surpass the heights we saw during the late 1990s through 2005,” Saab predicts. “I don’t foresee that to happen in a blink of an eye, but we will see those prices again in between seven to 10 years.” “Prices always go up in the end,” concurs Donna Evers, president and broker of Evers & Co. Real Estate in Washington, D.C. “And they always end up being higher than in the previous market. When I first started in the business in 1975, the upper brackets of home prices were just over 0,000. Now, it’s pretty much class=”import-text”>2010June.home values.txt.5 million.”

But Evers cautions that this turnaround is just going to take time. “If it takes five years to fall apart, it will take another five years to build up again,” she said.

A longtime property investor herself — she and her husband currently own three homes, one in Chevy Chase, one in Virginia, and a third in the Sixth Arrondissement of Paris — Evers continues to put her faith in real estate, and advises her clients to do the same — in spite of the fluctuating market.

Another concept most agents agree on is that investing in real estate is always a good idea, no matter what the market is doing. But especially after a major tumble, investment opportunities are ripe.

“Now is a great time to buy for two reasons,” Evers explained. “First, prices are lower, and second, we have incredibly low interest rates — we don’t know how long we can keep that going. For example, you can get a million loan at 5.5 percent interest. A couple of years ago, we would have laughed out loud at that,” she said. “If the investor can get it for really cheap money, they ought to get out there and do it.”

Saab points out that investment opportunities abound due to foreclosure properties that have flooded the market. “Foreclosures and short-sales will make up as much as 40 percent of total sales for the next 30 to 36 months,” he said. “The percentage could possibly be greater, depending upon how eager banks will be to put their inventory on the market. Their preferences will be to pace their releases to keep prices from plummeting, but the sheer numbers may make that impossible for some banks.”

Saab advises that “even after the supply begins to dwindle, the effect upon home prices will continue for at least another year.”

He adds, “I believe that this is a wonderful time to buy a property: Prices are as low as they can probably go, and we also have the Feds throwing in everything in their arsenal to keep interest rates low, so it is a good time to buy.”

As negatively as homebuyers and real estate investors may view the market, the Washington region is still considerably better off than most markets across the country.

“We live in the metropolitan area of the nation’s capital,” said Saab. “This is a government, defense, high-tech and business center. Everyone wants to be here because this is where the jobs are.”

Evers, who has more than 35 years of real estate experience, agrees. “Companies [and their employees] want to be here, but in addition, it’s a beautiful location and a beautiful city. It’s a plum place to live for so many reasons … it’s like the courtiers wanting to be closer to court — anything to do with the government, the people want to be close.”

And government often equals job stability, Saab notes. “There is a ton of money running around Washington, D.C.,” he said. “It’s clearly shown by the fact that people can handle a ,500 to ,500 per month mortgage or rent payment. Income is not going to change anytime soon in D.C. or its suburbs.”

“The D.C. metro area is also very transient, meaning people come in and out of it frequently, which also raises the demand for buying and selling homes,” adds Long & Foster’s Bacchus. “People come to Washington to get things done, and they will always need to come to and be in Washington to do business and make things happen in the country.”

He concludes: “The D.C. area has no idea what it is like to be in a Midwestern or Southern state, or some places in Florida, where there is no semblance of industry and no economic engine to support the economy. We are very lucky.”