Home The Washington Diplomat May 2018 U.S. Must Build on Its Diverse Mosaic of Cultures — And That Includes Puerto Rico 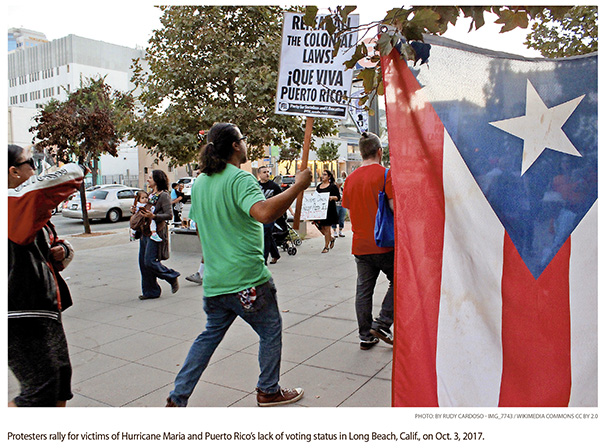 The U.S. national agenda calls for a discussion on the changing composition and nature of our population. Today, minority groups make up 35 percent of the entire population, and Hispanics have surpassed African Americans by 3.5 percentage points as the largest minority. If current growth patterns of minorities continue, the U.S. will be made up entirely of minorities by 2050.

There are already four states where the combined minorities are in fact the majority: Hawaii (76.7 percent), New Mexico (56.5 percent), California (55.5 percent) and Texas (50.2 percent). Washington, D.C., could also be included in this group, as well as other large states such as New York, Florida and Arizona, where minority groups make almost 40 percent of the population.

This demographic shift means that the paradigms that have historically defined the U.S. as a country are rapidly changing. The U.S. is no longer the “melting pot” it was thought to be. The idea of the U.S. as a society where different cultures and ethnicities melt in a large cauldron to produce a homogeneous “American” no longer holds. Instead, we should envision the current U.S. population as a large mosaic, made up of diverse cultures and individual backgrounds, each lending its color, form and texture to the entire composition. And all those individual pieces are held together by the mortar and grout that are our laws, civil rights and the individual and collective liberties that unite us all as equal citizens.

Yale Law professor Amy Chua, in her 2018 book “Political Tribes,” points out that the key to the success of our American society depends on our ability to integrate diverse population groups into an “ethnicity transcending national identity.” As such, the U.S. must start taking advantage of the great asset that its cultural diversity provides. It also needs to ensure the stability and power of the American people by prioritizing the equality of its citizens.

This is what social scientists call the “soft power” of a nation: a power that comes not from military or economic might, but rather from citizens enjoying their social and civil rights and forming a cohesive, functional society based on diverse cultural experiences and backgrounds. Our nation’s slogan, “e pluribus unum (out of many, one),” now applies to the diversification of the modern American mosaic.

But a nuanced analysis of these new demographics must not only be focused on the increasing presence of Hispanics. It should also pay special attention to the issue of Puerto Rico, an American territory that is essentially 100 percent Hispanic, home to 3.4 million natural-born American citizens and the homeland of over 3 million voters residing in the mainland.

The contributions that Hispanic-Americans (including the American citizens from Puerto Rico) can make to the nation will depend on the growth of their communities, and more importantly, on their participation in the political processes. This has been the historical trajectory of all groups of voters who have gradually gained suffrage since the U.S. was founded. President George Washington was actually elected by only 6 percent of the population, because in his day the only people allowed to vote were white, Anglo-Saxon, land-owning men. Eventually, voting rights were extended to all white men. Later, African Americans were allowed to vote, although this group faced constant discrimination for nearly a century at local and state voting booths. And it was not until 1920 that women won suffrage. American democracy progressed as a growing number of its citizens were allowed full participation in the civic and political processes that influenced their lives.

However, the process of perfecting our American democracy is far from over, and Puerto Rico is a prime example. The island has spent 120 years as an American territory without a voting member in the Congress that enacts the laws that rule over the lives of its citizens — and these American citizens are unable to vote for the president that sends their sons and daughters to war.

Even more questionable is the kind of voting apartheid that Puerto Rico endures. If an American citizen from the island moves to any of the 50 states, they automatically gain full voting rights and full representation in Congress. However, if an American citizen from any of the 50 states moves to Puerto Rico, that citizen losses all the voting rights they had while residing on the mainland. They cannot even vote in the national elections via absentee ballot while living in Puerto Rico. But if that same citizen decides to move to Cuba or Afghanistan, they can request an absentee ballot and exercise their full democratic right to vote. In short, the U.S. has 3.4 million citizens living under the American flag who are not allowed to enjoy the very same powers and rights that their fellow American citizens on the continental U.S. enjoy.

How can the beacon of democracy throughout the world allow such denial of civil rights to its own citizens, when this type of discrimination has been adamantly rejected by the American public and the international community? The significance of Puerto Rico’s suffrage exclusion extends beyond its shores because it is an issue of national importance, pertinent to the very essence of America’s democracy.

It is time to include Puerto Rico in the national agenda, regarding not only Hispanics, but also all our American brethren who will benefit from a more diverse society that vows equality for all citizens, regardless of where they may reside on American soil.

It is time to take care of this unfinished business of democracy in the national agenda.

Pedro Rosselló is a two-term former governor of Puerto Rico (1993-2001). He serves as chairman of the Puerto Rico Shadow Congressional Delegation.