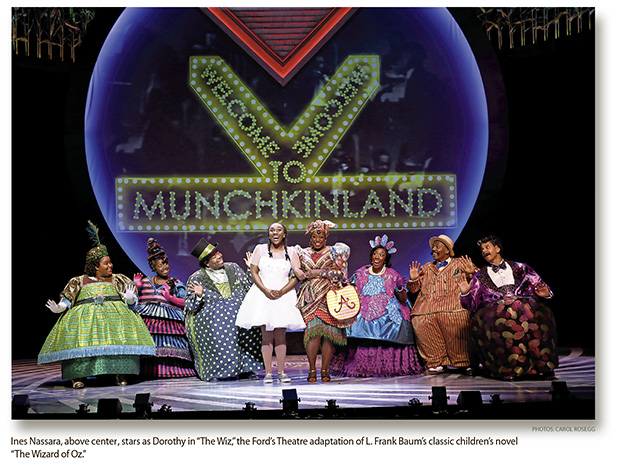 One of the most iconic children’s fantasy productions of all time, “The Wizard of Oz” is tough to match in pure entertainment value. “The Wiz,” an African American adaption of L. Frank Baum’s magical novel, currently at Ford’s Theatre, does well to follow in its footsteps with ingenious imagination and fancy. This version stays true to the original script, while spicing it up with powerful African American traditions and humorous present-day cultural references.

Imagine your task is to recreate a tornado with a whirling farmhouse, flying monkeys, good and bad witches appearing and disappearing out of thin air, and a yellow brick road leading to a magical land of Oz — without the help of cameras or special effects. Well, for director Kent Gash and his talented technical crew, these conundrums appear to be no-brainers. They simply use all the makings of a live production — a talented cast, props, costumes, choreography and lighting — to represent the treacherous weather, landscape and visual tricks that form the backdrop of this imaginative tale.

All of a sudden, the weather shifts for the worse. A leggy and beautifully dexterous DeMoya Watson Brown portrays the perilous, and at the same time seductive, tornado, complete with a choreography of furious hip thrusts, circles, kicks and leaps. The result is the farmhouse is a moving prop that slowly turns upside down as Watson Brown somehow climbs her way onto its top in triumph. 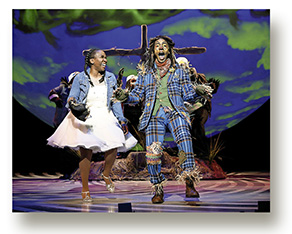 When Dorothy, played with naïve and childish aplomb by Ines Nassara, questions how to leave this craziness and get back home, a cast of characters, holding golden scepters representing the infamous Yellow Brick Road, tell her to follow them to seek help from The Wiz.

Dorothy follows the Yellow Brick Road until she encounters the Scarecrow, played by an incredibly limber Hasani Allen, who is strung up on a pole and surrounded by an assortment of dancing crows. Reminiscent of Michael Jackson’s portrayal of the character in the movie version, Allen leaps and splits his way into our hearts with his vulture backup dancers.

Dorothy and Scarecrow then give us our first taste of a jaunty “Ease on Down the Road,” after which they encounter a massive Tinman, played by Kevin McAllister, who sings “Slide Some Oil into Me.”

The Cowardly Lion, played by Christopher Michael Richardson, hides his insecurities behind a massive Afro and dark shades. He tells his story through the number “Mean Ole Lion,” in which his dance movements channel Tina Turner in her heyday. He is more Drama Queen than King of the Jungle. He claims his lack of bravery is because he was coddled as an only son by an overbearing mama and as a result, he has been in therapy with an owl. When informed The Wiz could give him courage, he asks, “In only one session?”

But the fun has only just begun. 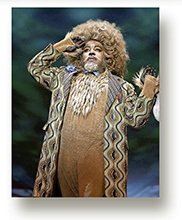 The Wiz, played by Jobari Parker-Namdar, is reminiscent of the singer Prince in all his open-chested-shirt and purple glory. In the number “Emerald City,” he’s at the helm of a roller-skating Motown Act, at which time Dorothy and her crew know they must be in the right place at the right time.

The joyous mayhem can’t last forever, however. Fast forward to Evillene, the Wicked Witch of the West, telling her hit men, the winged monkeys, to find and capture Dorothy and friends. To help, she uses Snapchat selfies projected larger than life on the stage backdrop to help the monkeys easily identify their target.

After Evillene is destroyed (spoiler alert), her helpers, known here as “Winkies,” break out in a celebratory African dance in what looks like a safari, singing the inspirational “Can You Feel a Brand-New Day?” Glinda (Awa Sel Secka), the Good Witch of the South, turns up as the African Queen and directs Dorothy to click her magic slippers to return home to Kansas. This is, of course, after The Wiz, who turns out just to be a car salesman from Nebraska, fails to deliver her to her homeland via hot air balloon.

Are these over-the-top antics and zany characterizations too much? Not at all; they’re just what the doctor ordered for keeping a time-honored show current and fresh. “The Wiz,” in this form, is still a display of good versus evil, peppered with a thick layer of humor that allows the audience to acknowledge that children and adults alike are never too old for good old-fashioned imagination and morals.