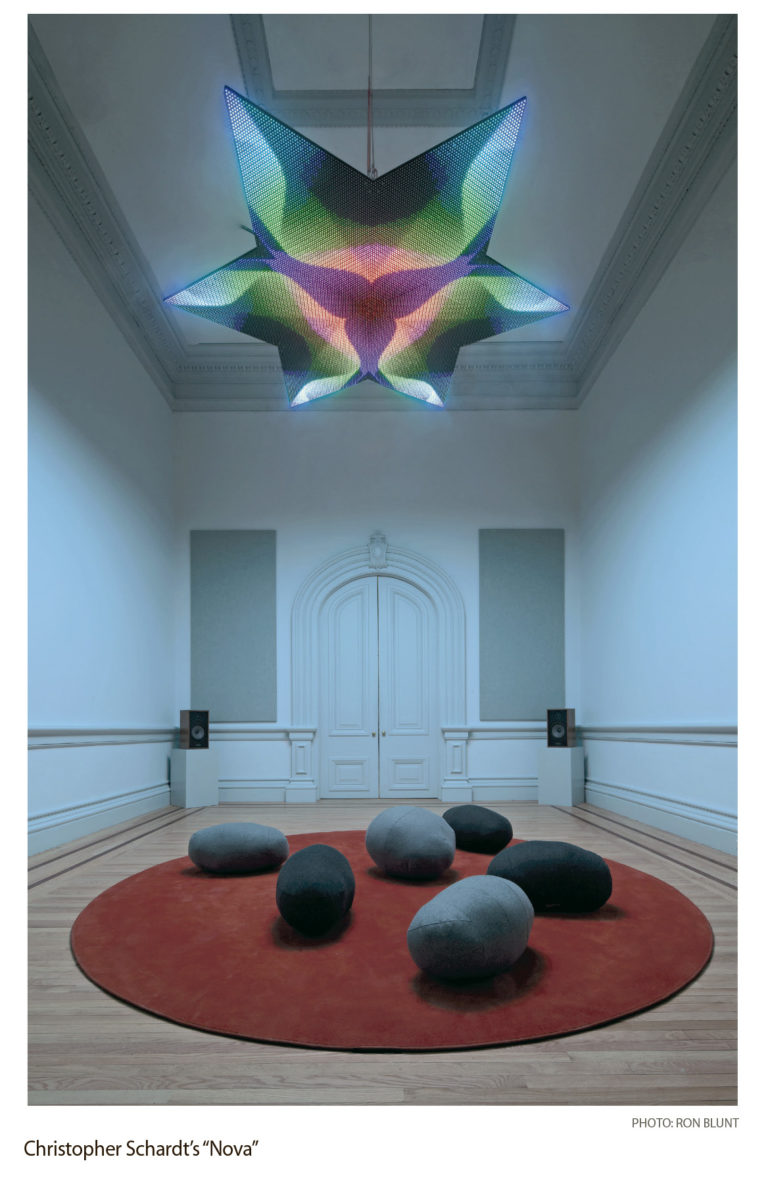 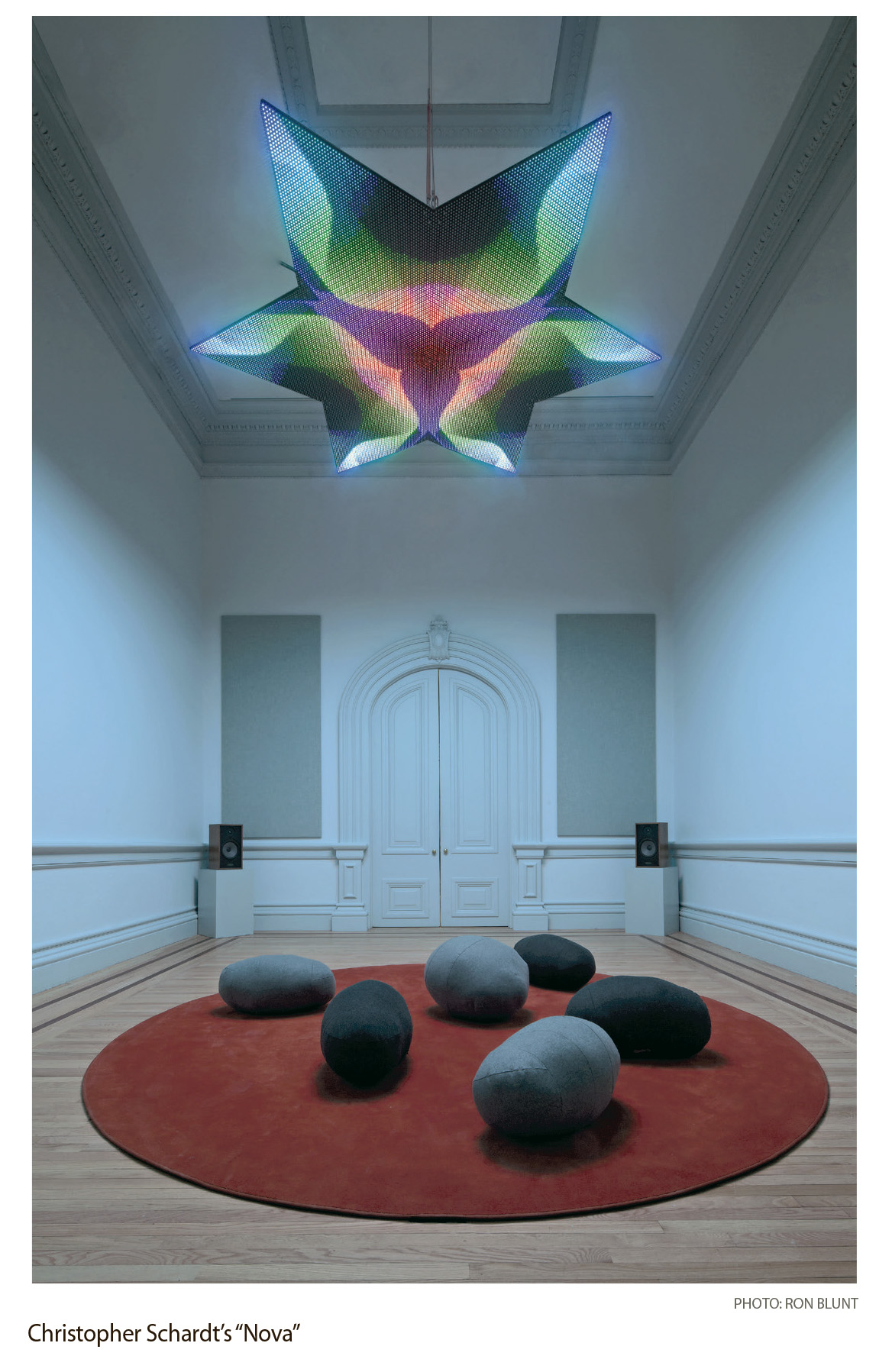 In 1986, artists Larry Harvey and Jerry James built a rough eight-foot-tall wooden figure from scrap lumber and dragged it to Baker Beach in San Francisco, where they set it alight in a modern summer solstice ritual.

Since then, Burning Man has become an annual tradition that shifted locales to Nevada’s Black Rock Desert, where it has grown to more than 70,000 participants in a weeklong counterculture festival featuring massive art installations, dance parties, lamp-lit processions and other forms of “radical self-expression.” But the spectacle is fleeting. The various multistory experimental art installations and buildings that rise in the dust are burned to the ground, only to be built anew the following year.

The Renwick Gallery has staged an ambitious exhibition titled “No Spectators: The Art of Burning Man” that celebrates the festival’s many unheralded but extremely talented artists for the first time in the nation’s capital. The size and complexity of the 14 installations required closing the entire museum for almost a month.

Among the room-size installations, Marco Cochrane’s 18-foot-tall sculpture of a nude female dancer titled “Truth Is Beauty” is somehow both intimate and commanding, a feminine spirit writ large. She is balanced on tiptoes with an arched back and arms twirling skyward, almost brushing the ceiling. Crafted from stainless-steel rod, mesh and metal, the body’s metallic sheen casts an otherworldly glow. But the sculpture commissioned by the Renwick Gallery is only one-third of the size of the 55-foot-tall original displayed at Burning Man in 2013. An inscription at the base reads in several languages: “What Would The World Be Like If Women Were Safe?”

David Best and his Temple Crew create intricate multistory wooden temples at Burning Man that are contemplative spaces and a welcome respite from the baking desert sun and wind-blasted sand that sweeps across the “playa,” a white-clay lakebed ringed by mountains that is Burning Man’s barren but beautiful home. People often leave memorials inside the temple to loved ones they have lost, including handwritten messages, photos and mementos. 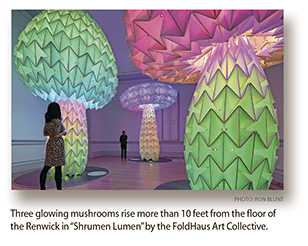 Best has transformed the largest room at the Renwick into a new temple with woodcut columns, ornately decorated walls, hanging lanterns, a 30-foot-wide chandelier and a pagoda altar featuring one large spike descending downward and another ascending upward, representing the “golden spike” used to mark the site of the Burning Man sculpture each year. Visitors can write messages on small wooden blocks and stick them into the temple walls or leave them on ledges where the blocks overflow onto the floor, expressing an anonymous mass of hopes and fears. “Stay human.” “Keep going.” “We miss you, Dad.”

The exhibition also features a collection of Burning Man patches, elaborate costumes, archival photos and a humorous collection of jars of ashes from former festivals, each labeled with their year of conflagration. Three glowing mushrooms rise more than 10 feet from the floor in “Shrumen Lumen” by the FoldHaus Art Collective. When you stand on a glowing circle, a hydraulic arm lifts the mushroom cap above you, causing it to crackle and pop like a campfire. It feels like a brief stop in Wonderland without Alice. 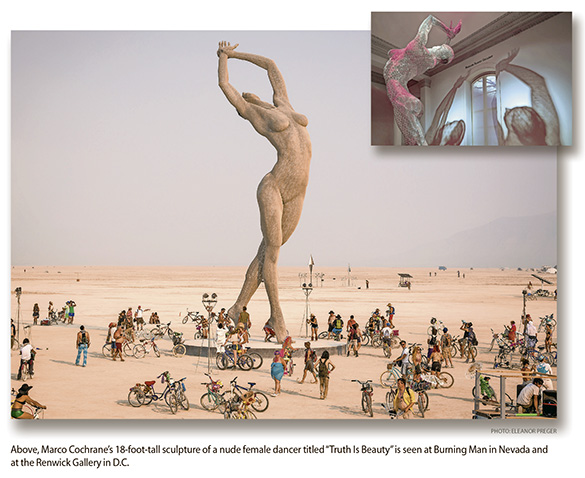 Christopher Schardt’s video installation titled “Nova” features a star-shaped aluminum LED screen suspended from the ceiling with cushions on the floor where visitors can lie down and gaze above them as if they were lying in a field staring at the sky. The video features swirling images of the cosmos, shooting stars and expanding galaxies in a mesmerizing and meditative display. 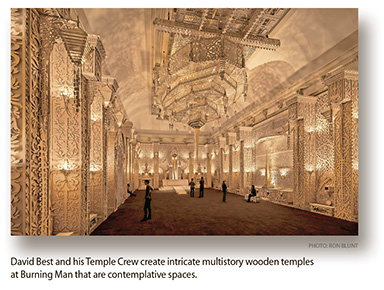 For the first time, art also is heading outside the doors of the Renwick, with six sculptures placed on downtown sidewalks and medians in a partnership with the downtown Golden Triangle Business Improvement District. Since Burning Man artwork is designed to be shown outside, these installations are a welcome addition and a fun surprise for tourists and office dwellers who will turn a corner and see two giant crows, a 14-foot-tall bear with copper fur crafted from 170,000 pennies or a bust of Maya Angelou that plays one of her poems.

Burning Man was founded on 10 principles, including radical self-expression, gifting and decommodification. Nothing is sold at Burning Man except for ice and coffee, and there aren’t any corporate sponsorships, big-name bands or food trucks. Participants must bring everything they need to survive (including drinking water), and many people share food, drink and gifts with each other in a communal spirit.

I drove more than 1,100 miles from Santa Fe, N.M., to Burning Man in 2005 to meet my brother and a group of “burners” in a theme camp called Furtopia. I didn’t know what to expect and arrived in the middle of a whipping sandstorm that exhaled chalky dust into everything in its path, including my tent, sleeping bag and clothes within minutes of setting up camp. It was a harsh welcome but an amazing trip into a surreal world where harsh elements battle with free spirits.

No Spectators: The Art of Burning Man