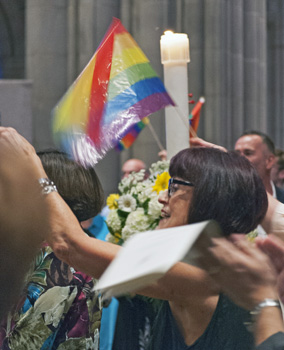 In 1965, Rev. Francis B. Sayre Jr., the fifth dean of the Washington National Cathedral, joined Rev. Martin Luther King Jr. in the final leg of the voting rights march from Selma to Montgomery, Alabama. Dean Sayre’s outspoken support for African American civil rights in the wake of the “Bloody Sunday” beatings of peaceful demonstrators by law enforcement was a hugely divisive move for a national religious leader at the time. At Sayre’s invitation, King delivered what would be his last sermon at the Washington National Cathedral on March 31, 1968, four days before his assassination.

Today, the Washington National Cathedral continues to be an outspoken voice for social justice on issues ranging from gun violence, to HIV/AIDS, to gay rights. The cathedral’s current dean, Rev. Gary Hall, has been outspoken supporter of marriage equality and announced this year that his Episcopal Church would perform same-sex marriages.

“Washington National Cathedral has a long history of advancing equality for people of all faiths and perspectives,” Hall said after the January announcement. “We enthusiastically affirm each person as a beloved child of God — and doing so means including the full participation of gays and lesbians in the life of this spiritual home for the nation.”

Supporters rally for marriage equality at the Washington National Cathedral. The Episcopal Church has been among the progressive Protestant denominations on the leading edge of support for gay rights among faith-based institutions.

“The fact that [the National Cathedral] wants to represent all Americans, and to provide pastoral care and services, including performing weddings, is really significant,” said Ross Murray, head of the Gay and Lesbian Alliance Against Defamation’s Religion, Faith and Values Program. “It speaks to how far this country has come in terms of how it treats LGBT citizens,” he said, referring to the lesbian, gay, bisexual and transgender community.

For decades, the Episcopal Church has been among the progressive Protestant denominations on the leading edge of support for LGBT equality among faith-based institutions. But the cathedral’s announcement that it would start performing same-sex marriages was of particular significance because of the church’s status as a quasi-public institution.

“Because the cathedral is such a visible faith community in the life of the nation, the symbolic gesture of us coming out so emphatically for same-sex marriage really sent this message out above and beyond the Episcopal Church,” said Richard Weinberg, the cathedral’s director of communications.

The cathedral is not funded by the government but serves a symbolic role in American civic life. The Protestant Episcopal Cathedral Foundation of the District of Columbia was granted a charter by Congress in 1893 to establish the National Cathedral. Since then, the church has presided over presidential funerals and guided the nation in times of celebration and sorrow.

The Washington National Cathedral’s bells rang out in celebration on June 26 when the Supreme Court struck down section three of the Defense of Marriage Act (DOMA), ending discrimination against gay and lesbian couples by the federal government. Rainbow flags waved at a special prayer service at the cathedral that evening, where LGBT couples and their allies gathered and sang “Surely it is God who saves me,” modified with gender-neutral language.

Hall’s sermon reiterated words he spoke outside the Supreme Court in March, at a rally organized by the United for Marriage coalition. “The freedom to marry the person you love is a not only a Constitutional right. It’s a moral right,” Hall told the crowd that had gathered beforehand for an interfaith prayer service at the Lutheran Church of the Reformation a few blocks from the court.

While the DOMA case was a big win for the LGBT community and its allies, gay marriage remains illegal in most states. Continuing the fight for equality is a priority for the cathedral, and so is changing the narrative when it comes to religion and homosexuality.

While some are wary of mixing the Bible with the ballot box, people of faith within the gay community welcome the cathedral’s outspoken progressive message. “The common story that exists in the media is that religion is opposed to marriage equality,” Ross said. The significance of what the National Cathedral is doing to dismantle that stereotype cannot be underestimated, he added.

“So often the case against marriage equality is being spoken from a religious standpoint. The cathedral speaks to reflect a version of Christianity that’s welcoming and open to all and affirms people as beloved children of God,” said Weinberg, who also leads the cathedral’s outreach with the LGBT community.

The National Cathedral’s work on international LGBT human rights issues is especially relevant here in Washington, which is home to a diverse international community, policymakers that shape America’s message abroad, and diplomatic representatives from around the world.

In May, the cathedral hosted a screening of “God Loves Uganda,” a documentary about the campaign against homosexuality in Africa led by American fundamentalism evangelical Christians, in partnership with St. Paul’s Foundation for International Reconciliation. Uganda is one of 76 countries where it is illegal to openly identify as lesbian, gay, bisexual or transgender, and to provide HIV services to LGBT people.

“In the states we rally around our freedom to marry,” Weinberg said. “We are absolutely committed on the domestic front … but when you weigh marriage equality to life and access to health care and basic things that you and I as Americans can’t relate to not having, which do we think is more important? That is why the dean is so passionate about the international issues.” 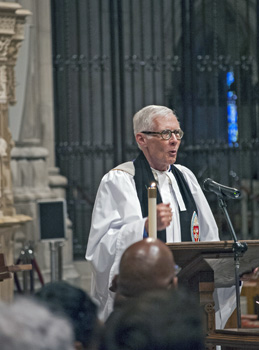 Rev. Gary Hall, dean of the Washington National Cathedral has been an outspoken advocate for same-sex marriage.

Mukasa is a 37-year-old transgender from Uganda, where a proposed law would make homosexuality punishable by death. Mukasa’s is the kind of “untold story the cathedral wants to shine a light on,” said Weinberg. But shining a light on issues so culturally divisive both at home and abroad requires a balancing act. “When you’re talking about dialogue on issues that are so rife in a different cultural landscape, you have to do so respectfully,” Weinberg cautioned. “We are discerning what role the cathedral can play without being too heavy handed.”

Intersection of Faith and Public Life

In America, “faith is a matter of choice, not coercion,” wrote the Pulitzer Prize-winning author Jon Meacham in his 2006 book “American Gospel.” In doing faith-based advocacy, the National Cathedral aims to be a voice that “shapes the life of the nation without strangling it,” to borrow Meacham’s phrase. That is a difficult line to walk in a secular democratic country whose population is as diverse as it is devout in its religious faiths.

“The cathedral would be the first to defend the separation of church and state,” Weinberg said, “but that does not mean that faith does not play a role in the life of the nation. The very existence of the cathedral speaks to the symbolic role faith does play in our civic life.”

That commitment is reflected in the Washington National Cathedral’s long history of gospel-based activism — from Rev. Sayre’s march with Dr. King, to the arrest of Sayre’s successor, Bishop John T. Walker, a close friend of Archbishop Desmond Tutu, during an anti-apartheid protest outside the South African Embassy in 1985, to the cathedral’s participation in this year’s Capital Pride Parade and its outspoken advocacy on behalf of the LGBT community.

“Our mandate is to be a witness for Christian beliefs and values in the midst of this city that is both the federal government’s seat of power and home to staggering inequality,” Dean Hall has said. “One of the ways we are called to do this is by speaking to legislators, decision makers, voters and lobbyists — and refusing to be complicit in the systemic injustice, poverty, racism and violence that infects our culture.”