Home The Washington Diplomat November 2012 Women Musicians Rolled with the Times, and Changed Them 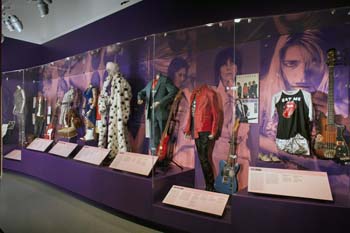 Photos: Rock and Roll Hall of Fame and Museum

“Women Who Rock: Vision, Passion, Power” is a jamming visual parade that documents the rise of women rockers with memorabilia such as instruments and costumes.

Confronting the big, brawling, sprawling exhibition “Women Who Rock: Vision, Passion, Power” is a little overwhelming, not only because of its size, but also because of the personalities, talent and songs that trail you wherever you go, like ghosts that slap you in the face with memories.

It’s a lot to absorb on the second level of the National Museum of Women in the Arts — the women, the clothes, the posters, the album covers, the quotes, the lyrics, the constantly changing times.

Your reaction to the exhibition — organized by the Rock and Roll Hall of Fame and Museum — depends in large part on who you are and what you remember.

It may be Billie Holiday’s raspy, soulful vocals that strike a chord with you, or Fleetwood Mac’s seductive melodies, or Chrissie Hynde’s brash punk rock, or Cyndi Lauper’s bubblegum-flavored pop, or the showmanship of today’s pop divas such as Lady Gaga or Rihanna. 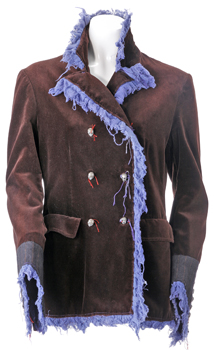 Gender, of course, is at the heart of the museum’s work and naturally plays a role in your reaction to “Women Who Rock.” Listening to pioneers such as Joni Mitchell, Tina Turner, Joan Jett, Donna Summer, Janis Joplin and Aretha Franklin is not just about appreciating their music — it’s about empowerment. Their songs were not only personally inspirational to millions of women (and men), they were the stones women used to gradually break down walls in a male-dominated industry.

And that is at the core of this exhibition, which not only tracks the history of rock ‘n’ roll, but the critical part women played in broadening and defining the genre. Their achievements are emblematic of the larger gains made by women, from the right to vote to membership on the Supreme Court.

Like everything else, making headway in the music industry, let alone rising to stardom, was a struggle. Women rockers had to fight managers, club owners, record label producers and a fickle American public, which was more accustomed to seeing them as sidekicks and groupies rather than artists, songwriters and band leaders. All of these roles came to be occupied by women, but not all at once, not all at good speed, and not without heartbreak or frustration.

It’s easy to forget now in the age of Lady Gaga and heaven help us Taylor Swift that the Wilson sisters and their band Heart caused a stir in the 1980s because they were bold guitar rippers and screaming songstresses. Not only that, but as more than one male critic noted, they were hot. In the 1920s, about the only female blues voices one could hear came from Ma Rainey and Bessie Smith.

1968 dress worn for Diana Ross and the Supremes

That’s in fact where the exhibit begins, in a section called “Suffragettes to Juke-Joint Mamas: The Foremothers/Roots of Rock,” which resurrects the growly voice of Rainey, the booming, dirty blues of Smith, along with fellow trailblazers such as Mahalia Jackson and Sister Rosetta Tharpe.

The exhibit is a lyrical arch that includes early blues, gospel, jazz, country, girl groups, disco, pop and punk. There are a few omissions along the way — Loretta Lynn, a country music icon, is here, but where’s Patsy Cline? To leave out the Nashville crooner but include the far-less powerful voice of Taylor Swift, who speaks to today’s mildly wounded teenaged hearts, falls a bit flat.

But overall it’s a satisfying trip — helped along by the more than 250 artifacts on display that highlight 70 artists, offering a glimpse inside these women’s journey and their personalities.

One of the first things you’ll see, for example, is a cutout figure of Joan Jett, the classic 1980s in-your-face rocker, with her pitch-black hair and eyes, guitar at the ready (a guitar that, by the way, she gave to Baltimore Orioles legend Cal Ripken Jr. when he broke the record for consecutive games — a melding of two of America’s biggest infatuations, baseball and rock ‘n’ roll).

There’s also a fashion parade of sorts throughout the exhibit. You see the dress Janis Joplin wore at the Fillmore East in 1969 and the glittery bits of nothing in which Tina Turner shook and strutted around on stage. There’s Cher’s barely-there, belly-baring riff on traditional Native American garb designed by Bob Mackie, as well as Madonna’s golden bustier designed by Jean Paul Gaultier and worn on her 1990 Blond Ambition Tour — outfits that drift by like a flashy, ratty issue of Vogue or Rolling Stone.

All of the costumes, concert videos, instruments, biographies and other memorabilia evoke a string of greats, from Madonna striking a confidently sexual pose, to Patti Smith at what appears to be a supper club at Carnegie Hall, spitting on the floor to catch her breath, to the brassy Pat Benatar in skin-tight black leather letting you know that love is like a battlefield.

I suspect that for a lot of guys, these women were their first crush, not only because of their looks but for that gift of voice, which, unlike a man’s, enhances beauty where it already exists and creates it where it doesn’t.

Those voices endure the cacophony of music trends and fads — siren-like, yet fierce, too. There’s Janis belting, “You know you got it if it makes you feel good.” Carly Simon coos, “You’re so vain, you probably think this song is about you.” And Pat Benatar challenges you to, “Hit me with your best shot.”

Then there’s Joan Jett, summing it all up perfectly: “I love rock ‘n’ roll.”