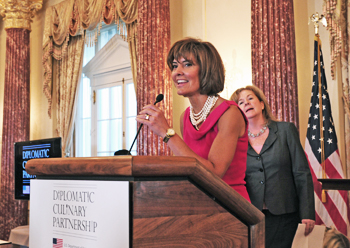 U.S. Chief of Protocol Capricia Penavic Marshall welcomes guests to the State Department, where they were treated to cuisine by some of America’s top chefs at the Sept. 7 launch of the Diplomatic Culinary Partnership, a program to incorporate food into U.S. public diplomacy efforts.

Food is oftentimes seen as the universal connector — a shared meal is a personal experience that transcends countries, cultures and languages to build mutual understanding.

And that gets to the heart of public diplomacy.

Embassies have long known that showcasing their culinary goodies is a surefire way to promote national culture (also see “Delectable Diplomacy: Embassies Cleverly Offer Taste of Culture With Cuisine” in the September 2011 issue of The Washington Diplomat).

Now the State Department is getting in on the act with a new initiative called the Diplomatic Culinary Partnership, which aims to “elevate the role of culinary engagement in America’s formal and public diplomatic efforts,” according to a State fact sheet.

Ambassador Michael Moore of New Zealand — whose embassy regularly promotes the country’s well-known wines and lamb — is excited about the effort. “Food is one of the oldest forms of diplomacy and offers insight into cultures,” he told The Washington Diplomat. “We are all more open around a table.”

“The connections formed over a shared meal can develop into some of the strongest bonds,” said Chief of Protocol Capricia Marshall at a star-studded State Department reception on Sept. 7 that launched the initiative. “Food has the unique ability to unite and energize.”

According to the State Department, the new initiative “builds on Secretary of State Hillary Rodham Clinton’s vision of ‘smart power’ diplomacy, which embraces the use of a full range of diplomatic tools, by utilizing food, hospitality and the dining experience as ways to enhance how formal diplomacy is conducted.”

Clinton herself has long been a proponent of using food to build bridges and break the ice. As first lady, she eschewed the dated French-rooted culinary model at the White House in favor of more innovative cuisine specifically tailored to foreign guests (50 of those recipes can be found in her 2000 book “An Invitation to the White House: At Home With History”).

She carried this attention to detail over to Foggy Bottom, where she’s enlisted the help of some of America’s top chefs to devise menus for visiting officials.

“Factoring in others’ tastes, ceremonies and values is an overlooked and powerful part of diplomacy,” Clinton told the Washington Post’s Tom Sietsema. “The working meals I attend with foreign leaders build stronger bonds between countries and offer an important setting to further the vital diplomatic work we conduct every day.” 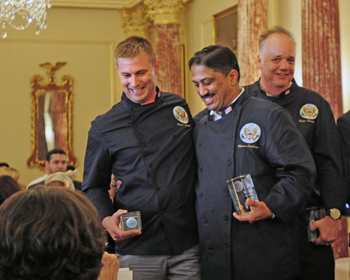 From left, Bryan Voltaggio of Volt, Vikram Sunderam of Rasika and Tony Mantuano of Spiaggia are among the high-profile chefs chosen to serve as State Chefs as part of the State Department’s new Diplomatic Culinary Partnership.

Marshall, who was Clinton’s social secretary, said she has come to appreciate “the power of ‘people-to-people’ diplomacy and the role that food can play in it.” Prior to this initiative, Marshall’s Protocol Office had already organized various tastings of cuisine from countries such as China, Mexico, India and New Zealand in advance of state visits or in partnership with local schools.

The State Department in fact has a long tradition of recruiting American talent to be the face of its public diplomacy efforts — from jazz ambassadors like Louis Armstrong to basketball greats like Kareem Abdul-Jabbar. For the Culinary Diplomatic Partnership, it’s tapped a cadre of high-profile chefs from around the country to serve as America’s culinary ambassadors, who’ll help with one of two programs: One, the American Chef Corps, is a network of chefs nationwide who will participate in food programs for foreign audiences abroad as well as those visiting the United States. Then there are State Chefs, who’ll be involved with State Department events and create special meals for certain occasions.

A partner in the initiative is the illustrious James Beard Foundation, a nonprofit whose stated mission is “to celebrate, nurture and preserve America’s diverse culinary heritage and future.” Some of America’s most prestigious chefs also jumped at the chance to join the endeavor.

Another notable local giant is Jose Andres of Jaleo fame — who is no stranger to the State Department, where he cooked for the 50th anniversary gala dinner of the Diplomatic Reception Rooms as well as this year’s July 4th gathering for Washington ambassadors.

“Over the years, I have met many people at the State Department and at embassies around the world — people that I also call friends — and that has really allowed me to engage in issues that I am passionate about,” said the Spanish-born chef, who’s the brainchild behind the widely acclaimed minibar restaurant concept and local favorites such as Zaytinya (where Isabella once worked) and Oyamel.

Andres has also worked in Haiti with World Central Kitchen and as a culinary ambassador for the Global Alliance for Clean Cookstoves, an initiative spearheaded by Secretary Clinton. 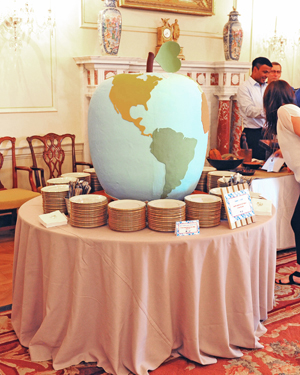 “I always see myself as a representative of the United States trying to do good and make a difference,” Andres told us.

He also believes that in the years to come, chefs will play an even bigger role in humanitarian aid or helping after crises.

“There is a lot of potential for chefs to become involved in a major way and I think we need to push forward on that end,” he said. “In the beginning, I think the initiative will be more focused on social diplomatic engagement, but of course I think it has a lot of potential to grow into something even bigger.”

David Guas, chef and owner of Bayou Bakery in Arlington, Va., is another hometown favorite picked to be a State Chef. “In all honesty, I was sort of blindsided by the invite,” Guas said, adding that because it was a State Department-led program, he felt compelled to volunteer his time and service.

“For me, it’s flattering that they’re turning to chefs,” he said. “I’m keeping an open mind and a willing schedule and will look at things as they come.”

Like many of the other chefs who come from an international background, Guas brings to the program his own personal melting pot of cultures and inspirations. He was raised in New Orleans to a Louisiana-born mother and Cuban father, and he recently returned to Havana with his father for a big spread in Food & Wine Magazine on Cuban cooking.

Guas said it makes sense to craft a diplomatic team out of America’s diverse culinary tapestry and is “excited to see how it all plays out.”

He also says the initiative itself just makes sense.

“Obviously food is a natural place of comfort and connects us all, no matter what our religious views are or what our government is like,” Guas said. “At the end of the day, we come from all walks of life but we need to feed our souls and kitchens are where we tend to gravitate.”

Next month, The Washington Diplomat profiles the various culinary programs hosted by the city’s embassy community.