Each year, the American Academy of Diplomacy (AAD) honors one outstanding reporter and one commentator with its Arthur Ross Media Awards for Distinguished Reporting and Analysis on Foreign Affairs. This year’s awards go to two journalists who have been reporting and commenting from Ukraine since Russia’s invasion of that country more than eight months ago.

The 2022 winners are Clarissa Ward, chief international correspondent for CNN, and Yaroslav Trofimov, chief foreign affairs correspondent for The Wall Street Journal. In addition, the academy is presenting a special award for outstanding work to The Kyiv Independent, an English-language Ukrainian online newspaper founded in 2021.

“With these awards, the Academy seeks to recognize the indispensable role that quality journalism from various types of media outlets (print, broadcast, or online) plays in presenting facts and analysis from around the world to American audiences, and thus spurring informed actions by policymakers and private citizens alike,” the AAD said in a press release. 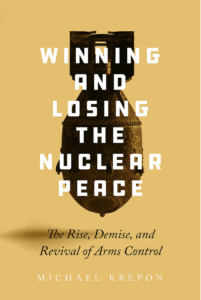 The Ross Media Awards, to be presented Nov. 9 during the academy’s annual awards luncheon at the State Department, are named after the late Arthur Ross. They recognize journalists whose reporting and analysis on diplomacy and foreign affairs make a singular contribution to public understanding of the critical roles played by diplomacy and the media in furthering US foreign policy interests.

In addition, the AAD has announced the winner of its 2022 Douglas Dillon Book Award: Winning and Losing the Nuclear Peace: The Rise, Demise, and Revival of Arms Control, by Michael Krepon, published by Stanford University Press.

Winning and Losing the Nuclear Peace, published by Stanford University Press, is “a magisterial assessment of the entire eight decades of diplomatic history of nuclear arms control and its symbiotic relationship with deterrence,” said the academy.

“Michael Krepon covers both East-West negotiations and nonproliferation efforts worldwide, focusing on the people who made nuclear arms control and those who opposed them – their motives, tactics, the interactions among them, their successes and failures, as well as the political environments in which they operated,” it said. “The book is written in an engaging prose making the subject accessible not just to experts, but also to general audiences and students. It is likely to remain the standard reference for many years.”

The book’s author, Michael Krepon, died earlier this year. Krepon’s family will accept the award at the Nov. 9 luncheon on his behalf.