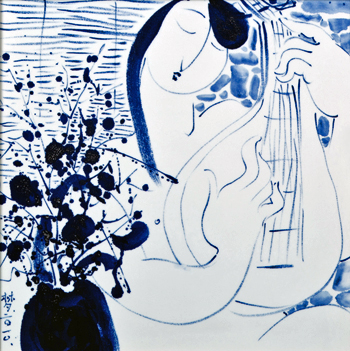 Zhao Mengge’s “Broken Strings,” above, and You Cuiqing’s “Spirit of the Han and Tang Dynasties,” demonstrate how artists in Jingdezhen have used ceramic painting to reinvent ancient traditions of Chinese porcelain art.

Perhaps no nation on earth is as important diplomatically to the United States as China.

The U.S. State Department devotes massive amounts of money and manpower cultivating its relations with the powerful rising giant in the East, who just also happens to be America’s biggest creditor, while the Pentagon warily eyes China’s growing military might. When tensions occasionally flare over human rights or economic issues, the U.S. government deploys its highest-ranking officials to Beijing, the heart of a region that Secretary of State Hillary Clinton recently called the “key driver of global politics” in the Foreign Policy article “America’s Pacific Century.”

Meanwhile, over at the Meridian International Center in Northwest Washington, a savvy and inspired group of art lovers are engaging in a different kind of Chinese diplomacy.

“CHINA Town: Contemporary Ceramic Painting from Jingdezhen” marks the first exhibition resulting from a recent memorandum of understanding between the center and the China International Culture Association. It also follows a second major collaboration with Chinese artists at the Meridian Center, “Metropolis Now! A Selection of Chinese Contemporary Art,” which opened to rave reviews last year. “CHINA Town” is actually the sixth in a series of exhibits organized over the last decade by Meridian’s Art for Cultural Diplomacy program in partnership with the Chinese.

And what a stunning exhibition it is. “CHINA Town” once again succeeds in showing us a fascinating exhibition that showcases both ancient and modern China with 56 works of porcelain art on display throughout the Meridian Center’s stately galleries. Of course, China is well known for its porcelain arts, but the history of ceramic painting is fairly new. The exhibition celebrates the connection to Jingdezhen, a city of 1.6 million people about 350 miles southwest of Shanghai. Jingdezhen has been at the epicenter of Chinese porcelain art for centuries, especially for its famous blue-and-white decorative motifs. According to exhibition materials, during the Ming Dynasty (1368-1644), China exported vessels, plates and other porcelain objects from Jingdezhen to the Middle East, Africa and Europe. 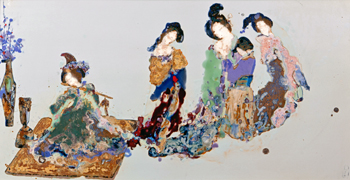 But today, Jingdezhen artists are offering an innovative new approach to their ancient porcelain heritage, in some cases maintaining traditions and in other cases reinterpreting or discarding it altogether.

The results can be seen at the Meridian, where paintings on large, flat porcelain surfaces vary from abstract forms and geometric patterns to representational landscapes and stylized portraits.

A common refrain among visitors at the exhibition’s opening was that at first glance, the ceramic paintings — especially from afar — appear to be traditional oil paintings or even watercolors on canvas.

Perhaps none of the ceramic paintings on display embodies this disconnect as well as Fang Yuan’s “Twilight.” In this lifelike painting, what appears to be a riverbed is covered with endless white snow. Yang’s attention to detail — the rocks partially covered with snow and the frozen, leafless branches of trees lining the brook — is breathtaking.

A more traditional, but no less expert approach is employed by Jiang Baolin. A series of Baolin’s work reveals the typically ethereal blue and white colors, spiked with earthy brown and tan tones. “Cucumber,” a busily decorated, elongated piece of ceramic, is a good example of this eye-pleasing technique.

Jin Zhaotao’s simply titled “Flowers” is a ceramic painting of just that, a vase of flowers. But Zhaotao’s vaguely impressionistic technique creates an almost three-dimensional effect as the red-gold petals seem to burst off the porcelain “canvas.”

Some of Zhaotao’s other works, mostly hauntingly beautiful landscapes, are much more subdued. A work titled “Autumn” depicts a craggy cliff in somber browns, whites and greens, while another titled “Summer” uses whites and yellows to infuse the porcelain with a lighter, brighter feel.

The exhibition moves into the abstract with Liu Zheng’s work, which, according to the exhibition’s catalogue, is “driven by an inner struggle to find a balance between tradition and innovation.” There is definitely a struggle evident in Zheng’s paintings, which incorporate boxy, abstract lines in a manner that, at times, makes it look as if the painting is wrestling with itself. The effect is somewhat hypnotic and almost creates a funhouse mirror sensation.

Luo Xuezheng, one of the older artists in the exhibition, takes a more traditional approach. His art employs more realism than most and has a soothing, eye-pleasing touch. “Autumn Waterfall,” for example, recreates a rushing brook surrounded by colorful, dense foliage. The image, through its soft colors, manages to be calming, while at the same time the flowing water keeps the picture kinetic, as well.

Ma Dingmin differs from his ceramic painting colleagues in his depictions of urban, or at least more residential, scenes as opposed to natural ones. He seamlessly blends traditional Chinese painting techniques with Western oil painting styles.

Curtis Sandberg, the exhibition’s curator and Meridian’s senior vice president for the arts, said the center is incredibly proud of the exhibition and is gratified that it can help bring China and the United States closer together.

“We find it to be quite exciting and innovative,” Sandberg said. “We literally went through hundreds, if not thousands, of works to show the medium to greatest effect. The exhibition is based on the premise that people can really understand one another in a profound way by looking at one another’s highest achievements.”