Right away, this wife exudes wisdom tinged with warmth — and solemn resilience. Aminatta N’gum, wife of the Gambian Ambassador Alieu Momodou N’gum, is a distinguished appeals court judge on a leave of absence while she and her husband, an appointed envoy who is a well-known international economist and civil servant back home, represent their tiny West African country here and in Canada.

Aminatta N’gum, a Gambian appeals court judge, second from left, stands next to President Obama during the credentialing ceremony of her husband, Gambian Ambassador Alieu Momodou N’gum, right, joined by their two daughters and son, all of whom live and study abroad.

Always decorated in bright cotton native dress, Aminatta, who has 32 years of legal and judicial experience, is walking proof that a strong educational base makes a critical difference in cultivating a country’s leadership. She stands straight, is quick to smile, and has a depth of genuine knowledge that can be hard to find, even on Embassy Row. She is kind but forthright, intelligent and understanding. And while her professional CV is seven pages long, her list of charitable organizations is also impressive. So is her family.

Four days before she was to board her flight to the United States, she was supposed to see her son Jibril, the couple’s third youngest child. Instead, it was two of his friends who came to their home to tell them that their beloved son had died. Jibril was killed instantly when the taxi he was in with several other people swerved off a windy road in heavy rain and wrapped around a pole. All of the other passengers survived, including the two friends who brought Aminatta the news. Her 21-year-old son, a first-year student at the University of Liverpool studying international economics, was the unlucky one; he was seated next to the rear door of first impact.

“Losing a child is so devastating that it is not possible to recover from it,” Aminatta said with profound sadness. “We have learned to carry on with our lives and our religion has sustained us in these trying times. I am now working on founding a charity in Jibril’s name for youths.”

As she recounts her story, the pain becomes etched on this friendly woman’s face. She looks as only a mother can who must endure the untimely death of her child.

“We still don’t understand why the police never came to see us,” she told me as she reflected on hearing the devastating news. “This is a terrible loss for our whole family,” Aminatta added in a quiet moment of grief.

The N’gums have three other children. Their eldest daughter, 28-year-old Mignone, holds an undergraduate degree in geography and a master’s in rural development from London’s Imperial College. She has served in the Gambian Ministry of Trade and spent 10 months at the World Trade Organization in Geneva. Mignone currently lives in Bonn, Germany, working with the Afrika Kommt Program. Momodom, 26, is studying international business at the University of Bradford. Daughter Sohna, 24, just graduated this past June from England’s University of Aberdeen. While she majored in French and international relations, she is currently consumed with starting her own line of fashion designs.

Aminatta and her husband first met abroad at university in 1974, not surprising since they have both spent so many years educating themselves. She was a new student at Keele University in Staffordshire, Britain, where he was in his second year of studies. “I was with a brand new friend from Botswana who knew him. We had just checked our mailboxes and were leaving as he was coming into the student union. He was two years ahead of me.” Later, a courtship ensued as the smart young woman went to study in the Gambia from her native Zimbabwe. They married in 1981.

Graduating in 1978, Aminatta received a dual bachelor’s of arts in law and sociology from Keele with “subsidiary studies” in biology and politics. A year later, Aminatta — born Annie Lois Runeni Ruredzo in Harare, Zimbabwe (then Salisbury, Rhodesia) — passed the bar in London and was accepted to the bar of England and Wales as a barrister. In March 1980, the Gambian bar appointed her a magistrate.

Although she was already a lawyer and a presiding judge, she never fully left the classroom. Over the years, Aminatta has studied French, information technology and research services such as Westlaw and LexisNexis. And in September 2005, she received her master’s in public international law with an international criminal law specialization from Leiden University in the Netherlands. 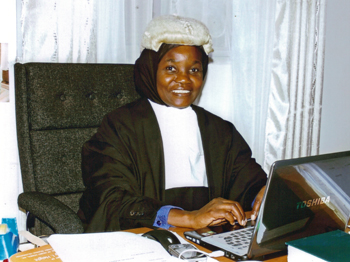 Aminatta N’gum is taking a leave of absence from her career as an appeals court judge in Gambia while she and her husband, Ambassador Alieu Momodou N’gum, represent their West African country in Washington.

While she is in D.C. on leave from her judicial post, Aminatta will work as a visiting researcher at the International Law Institute while serving as a member of a number of organizations, including the International Association of Women Judges; the African Ambassadors’ Spouses Association; the Mhina Tumaini Foundation, which aims to improve health and educational access for at-risk youth; the Public Policy Council of the Tahirih Justice Center, which protects immigrant women and children seeking justice in the United States from gender-based violence; and THIS for Diplomats. She also recently helped to raise funds for charity by walking nearly 40 miles in New York City’s Avon Walk for Breast Cancer. She had already “enjoyed” the same walk here in Washington earlier in the year.

But she’s also keenly aware of her newfound role as an ambassador’s wife in promoting her homeland. The Gambia, a tiny nation of 1.8 million, has had its share of political turbulence in the past and its president has been in power since 1994, although the nation has made some progress in holding generally free and fair elections in recent years and it’s avoided the political violence that’s roiled neighbors such as Guinea.

Aminatta is clearly proud of her country’s accomplishments. “We are on the Western tip of Africa, surrounded by Senegal on three sides, and have this lovely Atlantic sea coast on our fourth. Our beaches are pristine, our resorts lovely and draw people from all over the world. Most of our tourists come from Europe, especially the U.K. and Nordic countries, and other parts of Africa. Gambians are known to be welcoming, warm hosts who always have smiling faces. And our big river, the Gambia, gives us our name and our heritage of river people,” she explained.

“Often Americans visit the Gambia when they are young and in the Peace Corps and they continue to return, some every year, to our beautiful beaches the rest of their lives, bringing their families and friends,” she added.

Aminatta is also proud that her nation is a mixed society that has welcomed other nationalities into its midst. “People come from Liberia, Sierra Leone and Senegal because life is easier and better in the Gambia,” she said, noting that these immigrants are often “running away” from repressive regimes and difficult economic circumstances at home. “We take them in,” she said, with a big, broad smile.

I asked how she feels U.S. society has so far taken her in. Her answer is polite but makes me wonder if there hasn’t been some unfavorable reaction to her Islamic head covering.

Although she always wears a scarf when she leaves the house or if “there’s a strange man at home, I don’t cover my head when I’m at home with the family,” she explained. “I was a Christian before I married and since then have adopted the Muslim way of life. I have never covered my face; we don’t do that in the Gambia. That’s really more for the women in Saudi Arabia. Of course, as a practicing Christian, I usually wore a hat to church and my favorite was a French beret.”

But Aminatta is all too aware of the religious and sectarian divides that can brutally tear societies apart, something she’s witnessed from Rwanda to the white minority rule over Rhodesia.

“Man’s inhumanity to man is so awful,” said this distinguished lawyer. “I say, ‘Look at them, they look like you and me — not like the devil — they look just like us.’

It is this sadness, growing up in war-torn Rhodesia, then hearing more details of war’s toll while presiding on the bench, and her own recent personal loss of their son that makes this stunning woman even more of a wonder.

Despite the death of her child, she sees a bright future for herself, her husband, their family and her country.

“I would like to work with the United Nations again. I did that before,” Aminatta said, noting that she would also like to write a book on one or more of her passions. And she’s always working to help other Africans, fight for women and children, protect the environment and improve relations with the West. There’s always something to do for this hard-working, wide-ranging, highly educated woman, from the professional to the deeply personal, like the charity she hopes to establish in her son’s name. “I dream of founding a religious charity for the youths who need assistance with education, learning through the things they love like music and sports.”