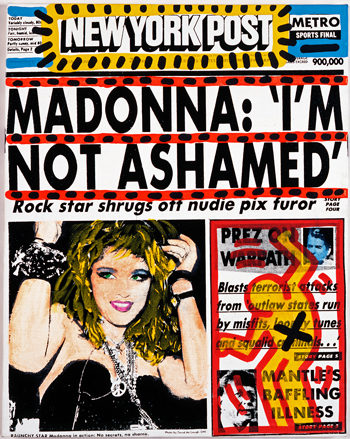 Perhaps no American artist of the 20th century stirred as much passion and ambivalence as Andy Warhol.

To his devotees, Warhol was a visionary who transcended abstract expressionism, offered brilliant artistic commentary on the issues of the day, and made the world of high art more accessible to the masses. To his detractors, Warhol was overrated and derivative, pilfering ideas about pop art from groundbreakers like Jasper Johns and Roy Lichtenstein while convincing the world that his own works said more than they really did.

Regardless of your own view of Warhol, one element of the Pittsburgh native’s work is indisputable: He had an uncanny understanding of pop culture and the media and used it to smartly skewer tabloid notions of “news.” The guy who coined the now ubiquitous expression that “in the future everyone will be world-famous for 15 minutes” was unparalleled in his intelligent exploration of the intersection of media, fame and art.

A new exhibition at the National Gallery of Art, “Warhol: Headlines,” presents the diverse works that Warhol created from tabloids and other news sources in the first comprehensive examination of his media-related art. It’s a tightly focused exhibition that succeeds in capturing the offbeat, sometimes whimsical nature of Warhol’s vision, while offering a serious study of the man and his methods. The headline motif is explored through about 80 works representing Warhol’s paintings, drawings, prints, photography and sculpture, as well as film, video and television.

A couple of blocks away, the Hirshhorn Museum presents a less penetrating but more visually appealing look at Warhol with a companion exhibition. “Andy Warhol: Shadows” is a monumental painting installation (and that’s not an exaggeration; the canvases take up nearly an entire level of the Hirshhorn circular second floor) that marks the first time all 102 of Warhol’s “Shadows” — silkscreened and hand-painted canvases featuring distorted photographs of shadows generated in the artist’s studio — have been shown at once. “Shadows” represents Warhol in the winter of his career, when he moved away from commentary on popular culture and took up abstraction. It’s a beautiful, contemplative exhibition full of rich color that begs the viewer to linger and think.

“Headlines,” by contrast, is busy and frenetic — and a prescient look at where the news media was a few decades ago and where it is now. Warhol’s fascination with all forms of news media — tabloids, magazines, television, etc. — prompts the viewer to wonder what he would have made of the instantaneous and unedited nature of Twitter, Facebook and other social networking sites. 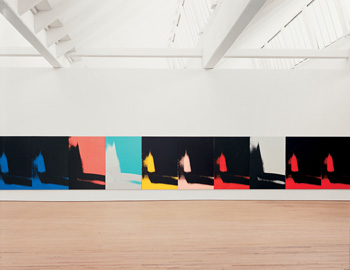 “Andy Warhol: Shadows” at the Hirshhorn Museum is the first time all 102 of Warhol’s hand-painted, silkscreened canvases featuring distorted photographs of shadows have been shown at once.

Warhol had a keen eye for the absurd and reveled in highlighting the incongruity of some newspaper layouts. For example, one work shows a newspaper clipping with a headline about an artist who was choked to death. Adjacent to that news, on the same page, is a department store ad promoting “cupid and lovable” bras for 25 percent off.

For people born of a certain age, Warhol’s newspaper reproductions will bring back a flood of memories. “Marine Death Toll Hits 172,” for example, reminds us of the awful attack on the U.S. Marine barracks in Lebanon in 1983. Stripped across the top of the same page is word of newswoman Jessica Savitch’s death in a car crash.

The exhibition spends admirable time and space exploring Warhol’s artistic relationship with the young up-and-coming artist Jean-Michel Basquiat, who died in 1988. In two of the Warhol-Basquiat paintings displayed here — “Ailing Ali in Fight of Life” and “Plug Pulled on Coma Mom” — Warhol would start the artistic process by recreating the headlines with his own paintbrush and then Basquiat would finish the job by altering the lettering and adding his own motifs. According to the museum’s wall text, this exercise recalled a Dada exercise known as exquisite corpse. The collaboration allowed Basquiat to have the “last word” on the painting, so to speak. That reportedly suited Warhol fine.

The exhibition also showcases some interesting, colorful work that Warhol did with the late New York artist Keith Haring. The two men seemingly had a blast mocking the New York Post’s breathless reporting on some nude photos of pop star Madonna that had surfaced. Warhol substitutes a picture of Madonna with her then boyfriend, actor Sean Penn, for a photo that originally appeared in the newspaper of a random woman “staying cool.” The piece employs Warhol’s sly commentary but really pops because of Haring’s jumpy, colorful adornments.

Regardless of where one puts Warhol in the pantheon of 20th-century artists, there is no denying his impact and the National Gallery of Art and Hirshhorn give that impact its proper due.