Home The Washington Diplomat November 2011 ‘Anonymous’ No More: Will the Real Bard Please Stand Up 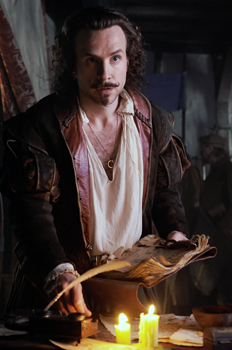 Also See:
‘The Man Nobody Knew: In Search of My Father, CIA Spymaster William Colby’ and ‘3’ and Repertory Notes

Rafe Spall plays Will, an illiterate Globe actor who steals credit for some of the world’s most iconic writing, in “Anonymous.”

German director Roland Emmerich is best known for his big-budget, explosion-filled Hollywood flicks, often with a save-the-planet-from-doomsday hero (“2012,” “10,000 BC,” “The Day After Tomorrow,” “Independence Day,” “The Patriot”). So it might seem surprising to hear that his latest movie is “Anonymous,” a British costume drama tackling the heady intellectual issue of true Shakespeare authorship.

Don’t forget that in Shakespeare’s time, his plays entertained the masses. Emmerich largely discards CGI technology, but his fans will be happy to hear that “Anonymous” is still an entertaining (political) thriller with plenty of action. Art-house fans should not despair, however, as the film is definitely not a dumbed-down Hollywood adaptation. Besides looking fabulous, it succeeds with a well-developed plot and strong acting.

Indeed, two of the world’s most distinguished Shakespearean actors and directors, Sir Derek Jacobi (founding member of the Royal National Theatre) and Mark Rylance (the first artistic director of Shakespeare’s Globe from 1995 to 2005), grace the screen with their presence. Ryland plays Condell, a common but talented thespian of the Globe Theater (the original, back in Shakespeare’s day). Opening the film, Jacobi speaks the prologue and epilogue of the Broadway play “Anonymous.” Meanwhile, the gifted daughter-mother team of Joely Richardson and legend Vanessa Redgrave, who herself became well known playing Rosalind in the 1961 Royal Shakespeare Company production of “As You Like It,” convincingly portray a feisty Queen Elizabeth I in her youth and old age.

The film vividly brings to life the Oxfordian theory that posits that Edward de Vere, the 17th Earl of Oxford (Rhys Ifans), actually wrote Shakespeare’s plays. As a young orphan (Jamie Campbell Bower), Oxford is a ward of the court, educated by excellent tutors with a big library in the home of William Cecil (David Thewlis). However, William’s Puritan son Robert Cecil (Edward Hogg), Queen Elizabeth I’s calculating adviser, believes literature and the arts to be blasphemous. Nonetheless, young Queen Bess (Richardson) appreciates Oxford for his work like “A Midsummer Night’s Dreams” — as well as for his other admirable attributes.

As an adult, particularly as his plays’ political satire would offend his powerful peers in court, Oxford needs to keep his identity as a playwright a secret. His attempt to have writer Ben Jonson (Sebastian Armesto) stage his plays is spurned, so reputedly illiterate Globe actor Will Shakespeare (Rafe Spall) is happy to take the credit — and the riches. While Shakespeare’s career blooms, important historical events develop such as the Essex Rebellion against Queen Elizabeth I.

Back in the real world, Jacobi and Rylance created the Declaration of Reasonable Doubt, an online petition aiming to expand serious academic research into Shakespeare authorship by the 400th anniversary of the Bard’s death in 2016. On Sept. 8, 2007, they presented it to William Leahy, head of the School of Arts at London’s Brunel University, following the closing matinee of “I Am Shakespeare,” a play written and directed by Rylance, who also starred in the title role. Other candidates for the true identity of the Bard include Christopher Marlowe, Sir Francis Bacon and Mary Herbert, the Countess of Pembroke. 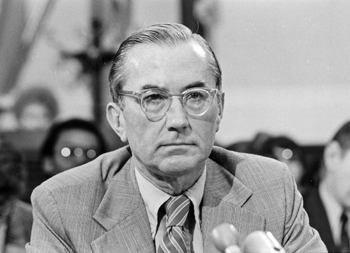 Filmmaker Carl Colby’s biographical film about his father, former Director of Central Intelligence William Colby, turns out to be quite a balanced portrait, largely free from the personal bias that mars many documentaries in which the subject is close to the filmmaker.

Carl stayed true to his training as a documentary filmmaker, including experience as a veteran of PBS, to helm “The Man Nobody Knew: In Search of My Father, CIA Spymaster William Colby.” In addition, as the title implies, William had to keep his professional life a secret to people outside of work, including family members, so he was just as much of a stranger to his own son as to everyone else. Though relatively unknown to the general public, especially today, William had a major impact on implementing U.S. foreign policy in the 20th century, which Carl does a very competent job of explaining.

William’s long career in the intelligence community started in World War II, when he served in the Office of Strategic Services, the predecessor to the Central Intelligence Agency (CIA). Post-war, he completed Columbia Law School, was bored by corporate law, and picked up a stint at the National Labor Relations Board. After he was recruited by a former colleague to the CIA, his work in the field included countering communists while based in Stockholm, Rome and Saigon. During the Vietnam War, William served as CIA station chief. He also led the U.S.-South Vietnamese rural pacification initiative, which included the notorious Phoenix Program intended to destroy the “Viet Cong infrastructure.”

In 1971, William returned to Washington as executive director of the CIA, followed by his reign as director from 1973. In the wake of Watergate, he testified about 30 times in front of Congress regarding the Phoenix Program’s alleged eavesdropping on U.S. citizens and its use of assassinations. His candor led National Security Advisor Henry Kissinger to recommend that President Gerald Ford replace William, leading to his retirement in 1976.

As detailed as “The Man Nobody Knew” is about William’s professional career, its rather strict practice of sticking to the facts leaves a thorough yet still superficial portrayal of William that doesn’t really reveal anything personal. For example, Carl’s narration is evenhanded but unexciting. Notably, Carl avoids exploring his father’s life after he left the CIA and founded a law firm.

Carl doesn’t provide clear insight regarding how he feels about William’s divorce of Carl’s mother, Barbara, at the end of a four-decade marriage in 1984. Also glossed over without resolution are Carl’s emotions about William’s 1994 death in a boating accident under mysterious circumstances. Carl vaguely alludes to that end as fate due to William’s guilt, professed shortly beforehand, for neglecting Carl’s sister Catherine, whose 1973 death followed struggles with epilepsy and anorexia. Yet Carl dispassionately states, “I’m not sure he ever loved anyone, and I never heard him say anything heartfelt.” 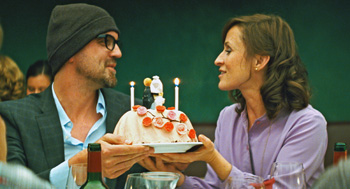 With “3,” crowd-pleasing German director Tom Tykwer (“Run Lola Run,” “The International,” “Perfume: The Story of a Murderer”) returns to his native German language for the first time since 2000 (“The Princess and the Warrior”). “3” successfully premiered at the prestigious Venice Film Festival, and it was well received at home in Germany, winning a slew of German Film Awards including Best Director as well as a Best Picture nod. As usual, Tykwer’s stylish direction makes it a pleasure for audiences to watch “3,” an intriguing contemporary update of a 1930s screwball comedy.

In Berlin, Hanna (Sophie Rois) and Simon (Sebastian Schipper) have lived together for nearly 20 years, during which time their relationship has dulled into familiarity, both leading busy lives of their own. Hanna finds time outside her successful practice as a physician to host a culture show on television. Simon manages an art engineering company, which often doesn’t maximize profits due to his fondness for his starving artist clients.

At a stem cell conference, Hanna is attracted to a handsome lecturer, Adam (Devid Striesow), and starts a heady affair with the polymath genetic scientist. Her newfound passion leaves her unable to attend to the emotional needs of Simon, who discovers he has testicular cancer and undergoes emergency surgery. Furthermore, Simon is devastated when his mother also develops cancer, attempts suicide, and dies.

No worries though, Simon himself ends up in bed with a guy he finds by the pool, who coincidentally turns out to be Adam as well. When they all find out about each other, the trio strike up a modern ménage à trios worthy of 21st-century Berlin.


“If there is a giant who sits astride the history of Uzbek cinema, it’s Ali Khamraev, one of those rare talents like Welles or Godard or Scorsese whose love for the medium is so intense that his best films burst with criss-crossing energies and insights, like a fireworks display,” proclaims Kent Jones, director of the World Cinema Foundation. Part of the first North American retrospective of Khamraev’s work, the National Gallery of Art’s “Ali Khamraev: Uzbek Triptych” (Nov. 13, 19) includes three films from the 1960s, ’70s, and ’80s by the graduate of VGIK, the distinguished Soviet state film school. Khamraev himself will be at the double feature of “Triptych” and “White, White Storks” (Sun., Nov. 13, 4 p.m.). The Freer Gallery of Art showcases four more films in “Uzbek Rhapsody: The Films of Ali Khamraev” (Nov. 11-20).


The fifth annual Alexandria Film Festival, presented by the Alexandria Commission for the Arts and the Office of the Arts, returns to Old Town Alexandria, Va. (Nov. 3-6), in various shistoric and distinctive venues.

AFI’s “Ballet in Cinema” series (through Dec. 22) presents a special live simulcast (Sun., Nov. 20, 10 a.m., plus encore on Mon., Nov. 21, 6:30 p.m.) of “The Sleeping Beauty” performed by the Bolshoi Ballet of Moscow (composed by Tchaikovsky; choreographed by Yuri Grigorovich in 1973 after Marius Petipa).

The fall 2011 season of Harlan Jacobson’s “Talk Cinema” continues Sun., Nov. 13, at 10 a.m. with a sneak preview of a notable upcoming indie or foreign films, which often includes a special guest.

The National Museum of Korea supports two special film events with live music at the Freer this month. To celebrate the reopening of the Freer’s Korea Gallery, Paul D. Miller, aka DJ Spooky, mixes his new score (comprised of a string duo and turntables) for Han Hyung-mo’s 1956 “Madame Freedom” (Fri., Nov. 4, 7 p.m.), a seminal classic from the golden age of Korean cinema in the 1950s.

In Emma Franz’s documentary “Intangible Asset No. 82” (Fri., Nov. 18, 7 p.m.), Australian jazz drummer Simon Barker seeks out a hermit-like Korean shaman musician. After the screening, Franz talks about the film with Barker, who will also perform live with vocalist Bae Il-Dong and drummer Kim Dong-Won, the Korean musicians featured in the film.

Marking the 45th anniversary of the Florence flood of November 1966, the University of Maryland’s Sheila Waters and Don Etherington discuss a rare screening of Franco Zeffirelli’s only documentary, “For Florence” (Sat., Nov. 5, 3:30 p.m.), which features the catastrophe’s only extant footage accompanied by narration from Richard Burton.

Presented with the Embassy of France, “Le Cinéma Fantastique” (through Dec. 31) shows that the uncanny and irrational in cinema “is no respecter of genre and form,” according to the National Gallery. “It finds a way into fairytale, horror, melodrama, even detective films.”