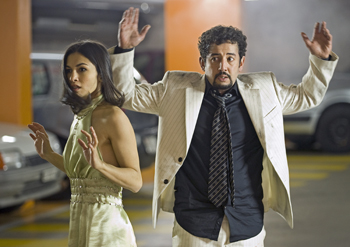 The 16th annual Arabian Sights Film Festival wisely sets its sights on the foremost transformative event on everyone’s minds, the Arab Spring, with a special focus on Egyptian cinema that showcases five recent works, including “18 Days,” the first film about the Egyptian Revolution earlier this year.

Beyond the prism of revolution and upheaval, the festival cuts across genres to capture the full spectrum of Arab life, from screwball family comedies to serious commentaries on sexism. A program of the Washington, DC International Film Festival (Filmfest DC), Arabian Sights runs Oct. 27 to Nov. 6 with screenings at AMC Mazza Gallerie, the Goethe-Institut, and La Maison Française at the Embassy of France.

“The Arabian Sights Film Festival showcases films that demonstrate the range and commitment of directors who invariably manage to tell moving stories while exploring issues facing their region,” proudly proclaims the press release.

Here are some highlights (and don’t forget to vote for your favorite film to win the Audience Award):

• “18 Days” (Egypt, various directors): This is the American premiere of the first film about the 2011 Egyptian Revolution and the 18 days it took for Egyptians to change the course of history.

• “6,7,8” (Egypt, directed by Mohamed Diab): Three women from different ends of Cairo’s complex social hierarchy converge as they each do their part to combat sexual harassment in the Egyptian capital.

• “Balls” (Sweden, directed by Joseph Fares): This heart-warming comedy about love, friendship and the art of being a man centers on Aziz, a cheerful, carefree guy looking forward to becoming a grandfather.

• “Cairo Exit” (Egypt, directed by Hesham Issawi): A pair of star-crossed lovers struggle to achieve a better future in this powerful, raw drama about life in contemporary Cairo.

• “An Ideal Family” (Egypt, directed by Akram Farid): Within the walls of an ideal home, in one of the city’s upscale districts, lives a supposedly “normal” family that competes to win the title of the “ideal family” on a television show. Needless to say, reality is not the same as TV.

• “The Italian” (France, directed by Olivier Baroux): In this opening night film, Dino is a top salesman at a Maserati dealership in Nice with a beautiful girlfriend. But his perfect life is built on a lie. His real name is Mourad Ben Saoud, and this year, unbeknownst to everyone, he must observe Ramadan to honor a promise he made to his sick father.

• “Man Without A Cell Phone” (Palestine/France/Israel, directed by Sameh Zoabi): Jawdat, a restless young concrete worker, just wants to have fun with his friends, talk on his cell phone and find love — a near impossible task in a place in his traditional Palestinian village inside Israel.

• “Operation Casablanca” (Switzerland, directed by Laurent Nègre): Renowned Moroccan actor Tarik Bakhari plays a regular guy who happens to be an illegal Arab immigrant — and who is mistaken for a terrorist and sets out on the most dangerous day of his life.