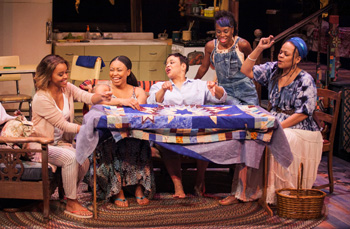 A quilt is a patchwork of many things, individual yet undivided. It starts with millions of threads woven into cloth, from which memorable samples are chosen and sewn into a cohesive whole. A quilt shields with its physical warmth on cold winter nights and feeds the soul with memories stitched together from different stories.

Playwright Katori Hall’s newest script is a narrative quilt that ties together the scattered stories of siblings’ lives into one explosive weekend that threatens to unravel the family. But like some overzealous collages, “The Blood Quilt” packs in too many pieces, sometimes muddying its central theme.

In its world premiere at Arena Stage’s Kreeger Theater, “The Blood Quilt” celebrates the time-honored tradition of quilt-making, a rite that goes back as far as slaves who sewed cryptic messages to communicate with one another and survive. Hall explores the need to keep African ancestral traditions alive in the face of family dysfunction and dissolution.

Set on a tiny, imaginary, remote island off the coast of Georgia, the play reunites formerly scattered half-sisters — one especially estranged — for an annual quilting bee at their childhood home. This summer, however, their task is poignantly difficult because their mother, a strong matriarch with a troubled past, has just passed away.

“The quilting becomes a reading of their mama’s will. Secrets are revealed and relationships are tested,” Hall told Arena’s dramaturg Linda Lombardi.

Despite the fact the play overflows with too many personal confessions at a rapid-fire pace, it uncovers the realistic pathos and upheaval that often accompanies the death of an important family member.

Hall, who came to Arena as an inaugural resident playwright of its American Voices New Play Institute, uses her platform to expose the rich cultural heritage of the Jernigan family, made up of four diverse sisters and one sister’s daughter — all powerhouses who struggle with their individual identities, their pasts and their uncertain futures. 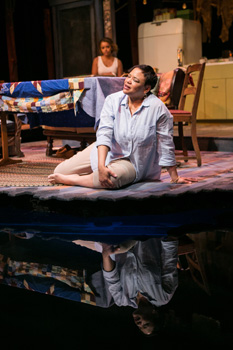 Clay portrays Gio, the most disturbing, yet entertaining, of the play’s four sisters.

They discover that their mother owes over $256,000 in back taxes on the house, where the eldest daughter still resides, and their only collateral to save the property are their irreplaceable, highly valuable quilts sewn by long-deceased ancestors.

While the sisters come to terms with this unwanted legacy and divulge painful truths about their private lives, Hall keeps the play afloat with humor, poking fun at each character’s stereotype as a way to cope with their collective agony.

Zambia, the teenage niece, played by a spunky Afi Bijou, arrives wearing a hijab head covering. Her mother Cassan (Nikiya Mathis) explains that this month her daughter is a Muslim, last month she was a Goth and the month before that she wanted to be a vampire. A typical teen of today’s obsessive Facebook and cell phone user variety, she speaks in text emoticons, exclaiming “smiley face” when she is pleased, “LMAO” when she finds something hilarious and threatening to un-friend her aunts when annoyed with them.

The most disturbing, yet entertaining sister, Gio, is an unruly cop played convincingly by Caroline Clay, who spouts off one-liner jabs at her nemesis and youngest sister, Amber, all while guzzling beer, smoking pot and relaying personal details of her divorce and sexual desires. Her biting humor, meant to hide the pain of personal failure and being left out of the will, occasionally crosses the line into needless venom, and the audience feels a spasmodic wince.

Amber, played a bit too coolly by Meeya Davis, is Gio’s polar opposite, a rich L.A. entertainment lawyer who was their mother’s “golden girl.” Arriving late to the gathering, conservatively and expensively dressed, Amber is a psychological conundrum who paid for, but didn’t attend, her mother’s funeral. The reason could be her provocative secret that explodes and polarizes in Act II.

The other two daughters — level-headed Cassan and the long-suffering oldest sister, Clementine, played by Tonye Patano — try to stay out of the fight between Amber and Gio, as they have their own concerns. Cassan is holding on to a nebulous, distant husband and struggling financially, while Clementine, their mother’s only caretaker, futilely tries to ward off gentrification of the island and the inevitable slipping away of the family’s traditional way of life.

The audience, like Clementine, wants the family to stay together, and perhaps this is the reason why the oldest sister is the most comforting. When it’s time to put the others in their places, Patano steps up to the plate and displays an emotional depth of which the others only scratch the surface.

This production’s technical aspects, in part, make up for what the script lacks in conciseness.

Plays, like quilts, are original works of art. This one clearly shows the love and reverence that went into composing it.