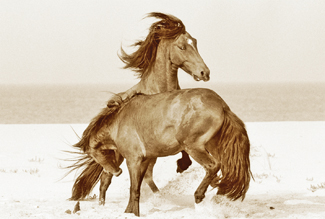 More than 100 miles southeast of Nova Scotia lies a mysterious deserted island, with no towns, no trees, and almost no humans.

Windswept by harsh Atlantic breezes and speckled with sand dunes and long stringy grasses, the thin, crescent-shaped strip of land — 26 miles in length and less than a mile wide — is virtually desolate.

A herd of wild horses has for centuries claimed this austere yet dramatic territory as its own — ever since their owners’ ships wrecked off the east coast of Canada, dubbed the “graveyard of the Atlantic.”

It all sounds like a children’s bedtime fantasy. But this sandbar, frozen in time, is Canada’s newest national park and a very real conservation success story. Sable Island is home to an estimated 400 feral horses that have thrived in an otherwise inhospitable landscape — proof of Mother Nature’s ability to flourish on her own, in the unlikeliest of places. In return for braving the unforgiving surroundings, these majestic beasts literally live free — free from predators and, most importantly, free from human interference.

“Fury” by photographer Roberto Dutesco, part of “The Wild Horses of Sable Island” exhibit at the Canadian Embassy, documents how a herd of 400 wild horses has thrived in a barren strip of land off Nova Scotia.

Ever since he fell in love with this magical horse sanctuary in 1994, Canadian photographer Roberto Dutesco has returned each year to document the island, both out of sheer fascination and in an effort to protect this unspoiled environment. The Canadian Embassy in Washington is celebrating his preservation campaign in “The Wild Horses of Sable Island,” featuring nine works by Dutesco that showcase this remote land and its exotic inhabitants.

“I have witnessed true peace and unquestionable love among its occupants,” said Dutesco, also a top New York fashion photographer.

Indeed, Dutesco’s images capture the almost-humanlike attributes of these animals, from their soulful gazes to their playful interactions with one another. Just inside the door of the embassy’s art gallery, a steed nibbles on the cheek of a dark chocolate mare in an 11-by-5-foot close-up shot. In brownish-reddish tints, the sepia photograph captures their lively dark eyes and long, unruly manes whipping in the transatlantic wind.

At the other end of the room, a small herd is frozen mid-gallop, their hooves kicking up sand as they race across a barren field. With emotional violin music playing in the background, one can almost hear the rumble of their pounding feet as the muscular horses call out to one another.

A third shot captured from afar frames the dark silhouettes of several steeds on a sandy peninsula. Crushing waves unfold on the shore on either side of the animals. The scene is almost cinematic — pure romance, pure drama.

The images are taken from Dutesco’s more extensive Sable Island photography gallery in New York City. His 15-year quest to capture the island’s stunning beauty was also depicted in the 2008 documentary “Chasing Wild Horses.” In addition, he’s planning to launch “The Wild Horses of Sable Island Mobile Project,” which would allow for 80 to 100 photos and cinematic works to be displayed around the world.

“I wish to bring my experience among the wild horses of Sable Island to people around the world, to show them true wilderness in its primal state, unaware and unafraid of man,” said Dutesco in a statement displayed on the exhibit walls.

Dutesco says Sable Island exists by its own rules. Indeed, the horses, sparrows and seals live and breed as they will, without a guiding hand. Save for national parks, few areas in North America have been so sheltered from the 21st century.

Canada has for decades recognized the value of this tiny sliver of land — not its monetary value, but its mystical power — and people in the area have supported the government’s efforts to preserve the land, according to Canadian Minister of National Defence Peter MacKay, who’s also the regional minister for Nova Scotia.

Their activism paid off in October of last year when the sanctuary became the latest addition to Canada’s national parks. To further protect the horses, human interaction on the island is strictly regulated, and visitors need written permission from the Canadian Coast Guard to enter.

Less than 250 curious adventure-seekers are granted permission to visit the island for daytrips each year. Otherwise, the 400 horses reign over the secluded domain — and their regal demeanor is reflected in Dutesco’s photographs.

In one breathtakingly detailed photo aptly titled “Love,” two horses tenderly press their foreheads together. Their eyes are locked, muzzles touching, as their hair billows in the constant wind.

But these are more than just pretty, sentimental pictures; they reveal an impressive true-life resilience. It’s hard to believe this defiant herd has managed to survive, alone and untouched, on a slender sandbar the length of Manhattan and the width of Central Park. Difficult still to comprehend is that the colts and ponies have lived off just sea grass and rainwater ponds, without a single tree or other form of shelter amid a constant barrage of storms and wicked winds.

Moreover, the species, foreign to the land, came to master it in a way humans never could. During the 1500s, Marquis de la Roche Mesgouez, sent by the French to claim “new found lands,” transplanted 40 convicts to the island, abandoning them there for five years in the hopes the prisoners would colonize the place, although only 11 survived.

Indeed, the area surrounding the island, with its dangerous ocean currents, thick fogs and shallow shoals, has swallowed up more than 475 ships since the 17th century. That’s how historians think the herd of some type of Spanish bard came to the dunes. Unlike the horses, the stranded sailors and likely pirates who landed on Sable Island over the centuries didn’t last long, and the place was never settled.

Dutesco wants to keep it that way, hoping to use his art to advocate for continued conservation efforts by showing what can happen when mankind allows nature to run its course.

“If natural locations like this are to endure,” he says, “they must be left alone.”

The Wild Horses of Sable Island: Photoworks by Roberto Dutesco