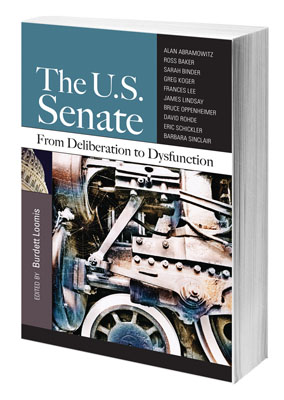 While the people of the United States are deeply divided on many political issues, there is one thing that unites almost all Americans: profound disappointment in, and even disgust for, the U.S. Congress.

With each new poll, it seems fewer and fewer Americans believe the government’s legislative branch is doing its job responsibly and competently. Recent polls have shown the congressional approval rating has sunk to near single digits. And some political analysts — and even a few legislators themselves — have quipped that they are surprised the approval rating is even that high, given the years of partisan acrimony and perpetual gridlock.

The Senate is often the target of the most withering criticism. With its arcane rules and complex procedures that befuddle many Americans, let alone the rest of the world, nearly all legislation now requires 60 votes to pass in the Senate. As a result, the upper chamber has become a legislative graveyard for many presidential initiatives as well as bills that originate in the House and are approved by overwhelming majorities in the lower chamber.

“The U.S. Senate: From Deliberation to Dysfunction,” edited by Burdett Loomis, offers a dozen essays by leading congressional scholars that analyze various aspects of the modern Senate. The essays were first presented as papers at a conference hosted in March 2010 by the Robert J. Dole Institute of Politics at the University of Kansas that examined how the Senate has evolved over the past 50 years.

The essays in this book are both challenging and illuminating and provide valuable insights for those willing to wade through some of the arcane details behind Senate rules and procedures. Readers will not leave this book expecting the Senate to become a more functional body any time soon, but they will better understand the historical forces that have created the modern Senate and appreciate how difficult it will be to change the body. The book is also a useful resource for politicos scrutinizing the upcoming presidential election, offering a glimpse into a less well-known but critical branch of the U.S. political system.

Respected analysts of the Senate such as Ross Baker from Rutgers University, Sarah Binder of the George Washington University, Burdett Loomis from the University of Kansas and Barbara Sinclair of UCLA offer well-written, perceptive essays that, in total, offer a broad and nuanced picture of the contemporary Senate.

Several themes emerge from these essays.

First, many of the scholars observe that the United States is now a very politically polarized nation in which many states are either strongly Democratic (blue) or strongly Republican (red), with relatively few states likely to shift party allegiance from election to election (purple).

Alan Abramowitz of Emory University, in an essay called “U.S. Senate Elections in a Polarized Era,” notes that in the 2008 presidential race between Barack Obama and John McCain, of the seven most populous states, only Florida and Ohio were decided by less than 5 percent of the vote, while New York, California and Illinois were all decided by more than 20 percent. He argues the nation’s political polarization is reflected in the Senate and has made bipartisan cooperation difficult. Sharp party divisions strengthen the hand of Senate leaders who appear willing to fight over almost every issue.

With American politics and the Senate sharply polarized, individual senators find it increasingly difficult and even risky to cross the aisle and work with members of the other party. Several of the scholars tell the same anecdote in which Senate Republican leader Mitch McConnell of Kentucky forcefully admonished his fellow Republican senators in 2009 and 2010 not to work with Democrats so the GOP would be in a better position to do well in the 2010 mid-term elections.

Frances Lee, a professor at the University of Maryland, argues in an essay called “Individual and Partisan Activism on the Senate Floor” that the modern Senate is a “body in which an independent-minded senator complains of feeling lonely and undervalued, unable to find a place amidst warring parties and ideologies.”

Several of the scholars also observe that the modern Senate has in fact become more politically volatile than the House and as a result, it doesn’t play its intended role as the bastion of calm analysis, sober thought and considered judgment in the American political system. (Senators serve a term of six years, as opposed to members of the House who must seek re-election ever two years.)

Since 1980, party control of the Senate has changed six times — in 1980, 1986, 1994, 2001, 2002 and 2006 — while control of the House has changed only three times — in 1994, 2006 and 2010. With control of the Senate in play in virtually every election cycle, there is fierce pressure on senators to tow the party line and embrace its political message so the party can secure the majority in the next election. Senate leaders in turn discourage their colleagues from seeking alliances with counterparts from the other party to solve problems.

Still another theme that emerges is the prevalence and power of the filibuster in the Senate. Rooted in the Senate’s tradition of unlimited debate, senators today use the filibuster as a delaying tactic to kill legislation they don’t like. Once used sparingly and only for major legislation, filibusters are now a routine maneuver to block even the consideration of minor bills.

For a diplomatic audience, several essays in “The U.S. Senate: From Deliberation to Dysfunction” are likely to be especially illuminating.

James Lindsay, an expert on Congress and foreign policy at the Council on Foreign Relations, contributes a valuable essay titled “The Senate and Foreign Policy” in which he identifies several phases in the body’s involvement in foreign policy over the last 50 years. He refers to the period extending from the 1950s through the 1960s as “Consent Without Advice.” During this time, the Senate was usually willing to follow the lead of the president, and there was considerable bipartisan deference to the executive branch. Both parties were persuaded of the need for strong presidential leadership in foreign policy and encouraged the commander in chief to be assertive.

“This is not to say that the Senate slavishly followed the White House’s lead. Senators could be counted on to quibble with the details of the annual foreign aid budget and from time to time they demanded that more be spent on defense. But much of the Senate’s activity on foreign policy addressed marginal issues,” Lindsay writes.

Then came a period he labels “Reclaiming Advice” from the 1970s through the 1980s when the Senate sought to assert itself on foreign policy matters, with mixed results. Lindsay argues that Senate activism did not translate into commensurate influence over foreign policy. “Senators discovered that powers easily surrendered are not easily recaptured,” he writes.

But there was an expansion of authority. For example, the Senate spearheaded passage of the War Powers Resolution in 1973 that sought to reassert the central role of Congress when it comes to taking the nation into war. The Church Committee, led by Democratic Sen. Frank Church of Idaho, conducted an aggressive probe of the U.S. intelligence community, and the Senate was at the forefront of efforts to cut off funding for the Vietnam War.

Lindsay describes a third period, extending from the 1990s until now, as “Advice, But Not Necessarily Consent.” Senators today frequently clash with the White House over foreign policy. With the collapse of the Soviet Union, America’s Cold War rival, lawmakers feel less constrained about challenging the administration on virtually all aspects of foreign policy. As an example, senators butted heads with the Clinton administration over relations with China, involvement in the Balkans, assistance to Mexico, combat operations in Somalia, trade policy and missile defense. An embattled President Bill Clinton described congressional assertiveness, much of it emanating from the Senate, as “nothing less than a frontal assault on the authority of the president to conduct the foreign policy of the United States.”

Lindsay argues that this tendency toward unrelenting confrontation was illustrated in the 1999 defeat of the Comprehensive Nuclear-Test-Ban Treaty. Lindsay says it marked only the 18th time in U.S. history that the Senate rejected a treaty — and it occurred after Clinton and 62 senators, including 24 Republicans, tried to delay the vote. But a group of conservative senators, sensing they were poised to defeat a key Clinton initiative, rejected pleas to delay the vote and forced the final rejection.

Lindsay concludes by disputing those who contend that bipartisanship in Congress over foreign policy has been the historic rule rather than the exception. “Partisanship in foreign policy has been more the norm than the exception in U.S. history and the two parties’ deep divisions on America’s interests in the world and how to pursue them ensures that it will continue,” he writes.

Another essay of particular interest to diplomatic readers is Bruce Oppenheimer’s “Congress and Energy Policy 1960-2010: A Long Term Evaluation.” Oppenheimer, a professor at Vanderbilt University, examines how effective 25 Congresses and 10 presidential administrations have been in developing a national energy policy over the last half century. A sound energy policy, after all, is critical to the health of the American economy and the nation’s ability to project power in the world.

Oppenheimer breaks the last half century down into five distinct periods and finds that despite occasional episodes of purposeful action and wise policies, both the House and Senate have largely failed to produce coherent energy policies that have served the national interest.

“If there is one major overall theme, it is that the successful short-term accountability provided by the American electoral system has undermined Congress’s capabilities to develop effective long-term policy solutions (or at least, policy resolutions) to the energy issues that face the country,” he writes. Put differently, he argues lawmakers have been more focused on the next election than crafting sustainable energy policies that help the country, with few political costs for maintaining the status quo.

Oppenheimer expands his conclusion to similar impasses on health care, Social Security, deficit reduction and immigration reform. “Unless there is a visible crisis or the costs can be widely dispersed, deferred or remain non-traceable, significant policy change rarely occurs in the contemporary context. The focus on electoral costs is too great in a system with frequent opportunities for voters to hold officeholders accountable,” he writes.

Oppenheimer adds that with control of the Senate now virtually in play every two years, it has become overly responsive to transitory shifts in public preferences. “The Senate of the last half century has grown increasingly divorced from its traditional role. Its unique ability within the institutional framework of American democracy to pursue the country’s longer-term policy interests rather than being responsive to the whims of the electorate has eroded,” he concludes.

None of the essays in this volume predict significant changes in the Senate in the near term. Steven Smith, a professor from Washington University, in an essay called, “The Senate Syndrome,” says the current deadlock appears intractable as Democrats and Republicans battle for ascendancy.