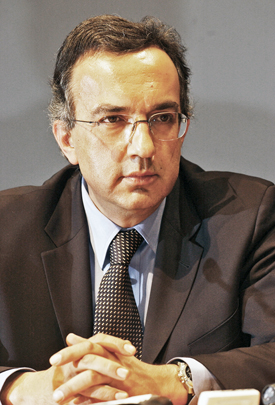 As the global economic downturn envelopes the auto industry, U.S. carmakers are struggling to find ways to stay afloat, build the models that U.S. drivers want to buy, and still come up with profits for their tremendous overhead costs. And the scramble for solutions has become a global one.

Foreign bidders have been lining up to snatch up parts of General Motors as GM downsizes and sells off units such as Saab and Saturn.

But the deal that’s gotten the most attention involves Chrysler, which is forming a strategic alliance with Fiat, the century-old Italian carmaker behind cars such as the Alfa Romeo and the Cinquecento, a three-door hatchback reminiscent of the energy-saving subcompacts that have dotted the European landscape for years — and have more recently emerged on U.S. city streets. The Cinquecento, in fact, or 500, could be the first Fiat car sold in the United States under the Chrysler pact.

But the Fiat alliance is not just about makes and models or reintroducing a car company to the United States that left its shores 25 years ago. It’s about Chrysler bringing in a partner that itself made a stunning turnaround in a floundering industry.

The eyes of the world have been on Fiat for years. The company was all but finished back in 2004 when Chief Executive Officer Sergio Marchionne took the helm. Now Fiat is eyeing opportunities among other ailing automakers to expand its own business reach and perhaps use its philosophy to resuscitate the U.S. auto industry. In the process, with talks swirling that the company could also merge with German automaker Opel along with Chrysler to create a new super conglomerate, Fiat could emerge as an unstoppable powerhouse in the global automotive industry.

Fiat would not speak directly to interview requests as the Chrysler deal takes shape (Fiat S.p.A and Chrysler signed an initial agreement April 30), but it’s clear that Fiat’s CEO brings a different perspective to the entrenched industry.

“I used to think that chemical companies set the benchmark for value destruction, but the auto industry is certainly up there,” Marchionne wrote in a Harvard Business Review commentary in December 2008. “[C]ar companies have consistently destroyed value over the years. Fiat was one of the worst offenders.”

So, when he took charge, Marchionne didn’t just chisel away fat at the company, he chopped it off — starting at the top. He gave about 2,000 employees their walking papers in 2004 at the company’s Turin headquarters.

“If you want to grow leaders, you can’t let explanations and excuses become a way of life…. That’s a characteristic of the old Fiat we’ve left far behind,” Marchionne wrote in the December piece titled “Fiat’s Extreme Makeover.”

“Traditionally, all important decisions in Italian companies are made by the CEO,” he explained. “It probably worked fine as a leadership model back in the 1950s, but today it’s quite unsustainable. A business like Fiat is far too large and complicated for one man alone to lead.”

So he got more leaders. What Marchionne recognized was there were a lot of mid-level individuals willing and capable of taking on more responsibility, while some of the individuals at the top were stuck in their stagnant decision-making ways. He also noted how engineer-heavy the company had become, with pointless meetings and wasted time that typically meant four years for a new model to come online. Now, the timeframe is about 18 months, and his management team has evolved to include individuals whose marketing backgrounds lend themselves to the process.

Marchionne believes that as CEO, helping fellow employees doesn’t mean doing their job for them, which makes the CEO’s position all the more crucial. Rather, individual responsibility must be spread throughout the company. If anything, Marchionne says he keeps an eye on his managers, constantly evaluating performance to keep the company from getting mired in wasted time and resources.

“Once we’ve identified our high potentials, I invest a lot of time engaging with them,” he wrote. “I spend four to five months conducting performance reviews for the top 700 people.”

Marchionne’s eye for the bottom line and management reshuffle though didn’t mean he slashed employees. In fact, he improved union relations and emphasizes his special commitment to Fiat’s employees. In the United States, he said, there is a tendency to “shed heads and shut plants.”

“[I]n Europe we work in a different context, and the Americans might learn from this,” he wrote. “When I showed up here, the easy thing for me to do would have been to shut down two plants and start re-aggregating assets elsewhere.… Had I done that, we would have had a very disgruntled workforce.”

Marchionne also continues to look outside the auto industry for newer and more efficient ways to grow the business. “Part of the story behind our success is that we got savvier about branding — not only by promoting people in marketing who understood the issues, but also by benchmarking ourselves against companies like Apple and bringing in people outside the car industry,” he explained in Harvard Business Review. “I like to think of the Cinquecento as our iPod.”

Even this fine-tuned approach, however, doesn’t eliminate the challenges of a downward spiraling industry that’s begging for help worldwide. For example, in the first quarter of 2009, General Motors lost billion. After posting a series of profits — the first since 2000 — Fiat Group itself recorded a 411 million euro loss for this year’s first quarter.

But Fiat still calls it a “break-even” trading performance, with 5.1 billion euro in liquidity. In addition, Fiat showed significant gains in market share. In Italy, the company’s market share grew 1.1 percent over the same quarter in 2008, and its 9 percent share in Western Europe was up nearly a percentage as well.

With a tough economy, however, Marchionne will be looking to replicate the techniques he used to bring Fiat back from the junkyard just a few years ago. After posting losses in 2005, Fiat Group bounced back in 2006 with a net income of about 1 billion euro. In 2007, the company posted a net income of more than 2 billion euro, followed by a profit of around 1.7 billion euro profit in 2008.

Marchionne wants to bring his growth formula to Chrysler, in a merger that just began and continues to evolve. The alliance with Chrysler will involve “bringing together Fiat’s world-class technology, platforms and power trains for small- and medium-size cars, and its extensive distribution network in Latin America and Europe,” Marchionne said in a statement announcing the alliance in April. “Our goal since we first entered discussions with Chrysler nearly a year ago was to leverage the strengths of both companies to yield the scale, efficiencies and cost savings necessary to create two stronger automakers able to compete more effectively on a global scale.”

On the production line, Fiat will contribute licenses that allow Chrysler to access all Fiat car platforms to build Chrysler automobiles. It also includes licenses that give Chrysler the use of engine technology that helped to put the Italian carmaker back on the map.

The U.S. Treasury’s .5 billion bankruptcy loan to Chrysler is conditional on the company completing the asset sale to Fiat (or a comparable deal). Chrysler is scheduled to have an auction for its assets on May 27. After the bankruptcy filing is complete, Fiat and Chrysler together would form the world’s sixth-largest automaker in the world by sales.

A nine-member board of directors will manage the new Chrysler company, with three of them appointed by Fiat. The Voluntary Employee Benefit Association as well as the Government of Canada each have the opportunity to appoint a director as well. When the deal closes, Fiat will have an equity interest of 20 percent, along with the right to receive an additional 15 percent in equity.

Marchionne admitted that this wouldn’t have happened without cooperation from the U.S. Automotive Task Force and Canadian cooperation. In addition, he acknowledged some tough decisions made by United Auto Workers and Canadian Auto Workers unions, whose leadership accepted benefit reductions and other concessions to allow the process to move forward.

In his April statement, Marchionne said he would spend the next several months visiting Chrysler employees and touring facilities as the time-consuming legal process continues, to “re-emerge quickly as a reliable and competitive automaker.”

“I believe Chrysler can meet the challenges posed by today’s difficult market conditions by tapping back into its innovative spirit, by focusing on quality as a cornerstone of its product offering,” he said. “It is a model we have strictly adhered to in the past few years at Fiat, and one I believe we can adapt here to write the next chapter in Chrysler’s legacy.”

Christopher Prawdzik is a freelance writer in Falls Church, Va.