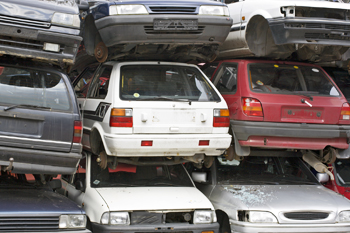 In a down economy, what better incentive to move cars off a dealer’s lot than to offer cold-hard cash? The concept is called “cash for clunkers,” and this car trade-in program that began in Germany has the United States weighing its pros and cons.

Recently, Speaker of the House Nancy Pelosi (D-Calif.) issued a statement on the House Energy and Commerce Committee’s agreement for a “cash for clunkers” proposal that would provide incentives for Americans to trade in older vehicles for more fuel-efficient cars and trucks, thereby fueling the ailing U.S. auto market. Pelosi called the idea a “common-sense proposal that will help provide a shot in the arm for the American auto industry at a crucial time for our economy.”

“It will reduce the emissions that cause climate change, and make America more energy independent,” the House speaker said. “By helping Americans trade in their old, less fuel-efficient cars and trucks for newer, higher-mileage vehicles, consumers will save money at the pump, help protect our planet, and create and save jobs for American auto workers.”

Pelosi said she looks forward to working with the Senate to pass what she called critical job-creating, energy-independence legislation and send it to the president’s desk for signature.

So how would such a program work?

In Germany, Chancellor Angela Merkel’s Christian Democratic Union and the Social Democratic Party recently tripled the available cash for the popular program, giving some 2 million Germans the opportunity to get more than ,300 if they get rid of their old cars and buy new vehicles.

Wrecked cars are stacked up at a German car cemetery.

So far, the deal is working.

According to the Economist, by early April, 1.2 million people had applied for the offer — double the expected amount. And in March, car sales jumped by 40 percent in Germany (although the same article also warned of a future slump once the program expires).

What’s being debated in the United States involves a voucher-type program — not actual cash like in the German model — for buyers looking to participate in the trade-in offer.

But the goal remains the same: to remove older, high-emissions vehicles from roads and swap them for newer, more environmentally friendly substitutes.

The program has so far won the support of President Barack Obama as a means to help U.S. automakers, but politics have played their usual hand in how “cash for clunkers” will unfold, with government officials debating everything from fuel-efficiency requirements to implications on trade.

On the ground, the proposal has received mixed reviews, although area dealers who spoke to The Washington Diplomat said they can see the merits of the deal, assuming it’s properly formulated.

Volkswagen Springfield marketing manager Nina Groves said the Virginia dealership would support any incentive the government is proposing to get more fuel-efficient cars out on the roads.

“German technology is on the forefront of diesel and environmentally responsible vehicles for the future,” Groves said. “Volkswagen has worked on clean diesel for decades. If [this program] goes through, we think it’s best for our environment as well as our neighbors in the local community.”

In fact, the Volkswagen Golf recently was named the 2009 World Car of the Year, according to a jury of 59 international automotive journalists from 25 countries. The Golf has sold more than 26 million units in 120 countries, making it one of the top-selling vehicles of all time.

Still, while “cash for clunkers” looks good on its face, some car experts wonder about its success here. For one, not very many Americans have old cars, especially since car leasing was introduced.

“People don’t keep cars as long as they used to,” said Jamie Dent, sales manager with Stohlman Automotive in Virginia. “Technology is so fast now that there are not many 10- to 15-year-old cars lying around.”

Dent said he welcomes any package the government is willing to assist with, but suspects the program will likely have some ups and downs. “One drawback is that it’s not going to completely change some people’s situations,” he said. “In some situations, it doesn’t matter how much the government can assist, some people still may not be able to buy a new car.”

Other car officials want to make sure the cash for clunkers program is completely vetted before actually being implemented.

For example, if cash for clunkers applies only to “American” cars, some question whether such a vehicle actually exists, considering that most auto parts come from somewhere else in the world. So just because a car is assembled in the United States doesn’t mean it’s made in America, said Randy Merry, diplomatic sales manager for EuroMotorcars in Bethesda, Md.

“How do you define U.S. cars? The car with the most U.S.-made content is a Honda Accord, but most people think it’s a Japanese car. The components and assembly of a Honda Accord is more American than a Ford or a Chevy. I would object to the [cash for clunkers] plan if they say it’s for U.S. cars only,” Merry said, arguing that it’s important for government officials to “think this program through.”

“I don’t want another no-strings-attached bailout. Every action has a reaction. They’ve got to think this through. It’s not a good reason for this program just because it’s politically popular and it looks good on the surface,” he said.

A politically popular example can be seen with the trendy hybrid car. Hybrids operate on batteries, which are full of acid. In roughly five to eight years, when these batteries need to be replaced, there could be a surplus of old batteries and an even bigger pollution problem, Merry pointed out.

He cited another example, the use of ethanol. The fuel ethanol industry in the United States is largely based on corn. However, ethanol is highly corrosive, is expensive to produce and requires special transport (which thereby drives up the very carbon footprint it’s meant to reduce). And in other countries it crowds out the production of corn for food — all of which doesn’t make it an ideal alternative to oil.

Groves of Volkswagen Springfield agrees that any plan must weigh the overall environmental impact. She noted that the cash for clunkers proposal should come with a proper recycling program, and not just “increase our junkyard population, passing cars from one place to the next.”

“It needs to be a well-rounded program, making sure we have a method of disposal of current vehicles that really need to be melted down and used for other things,” she explained. “When we have an incentive to buy, we will have a huge amount of inventory on our used car lots, with people getting rid of those vehicles. We have to have a clear understanding of what we’re going to do with them and how we’re going to handle them.”

If the program is completely vetted and all the stars align, car experts say cash for clunkers could work in the United States. Merry agrees that it could minimize a current negative by bringing more environmentally friendly cars to the roadways. “Newer cars are safer than the older ones, and it would help the economy,” he said. “Anytime you spend money, you circulate money through the economy.”

Christine Cubé is a freelance writer in Alexandria, Va.