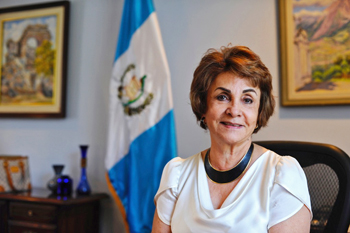 The seasoned diplomat — whose experience ranges from bananas to the Belize territorial dispute — presented her credentials to President Obama in a June 27 ceremony at the White House, along with 10 other new ambassadors.

As the representative here of Central America’s most populous country, Ruiz takes her new job seriously.

“To date, I am the only woman who has held the position of secretary of state, and I hope I will not be the only one,” she said. “Guatemala offers many opportunities to women. We still believe there’s a lot to be done.”

The arrival of Ruiz, who replaces Julio Ligorria as ambassador, coincides with an upheaval in Guatemalan politics. Last October, voters elected one-time TV comedian Jimmy Morales president in a landslide election, in the wake of public anger over his predecessor, Otto Pérez Molina, who was jailed a month earlier after his ouster in connection with a vast corruption scandal. The 47-year-old Morales, who heads the center-right National Convergence Front, had no previous political experience before running for president.

Ruiz declined to discuss her country’s domestic politics but did suggest that “Guatemala has come a long way” since the military dictatorships that dominated much of the 20th century.

The country’s bloody civil war pitted U.S.-backed government forces against leftist rebels, including indigenous Maya and peasants, as well as academics, activists and others opposed to the regime. An estimated 200,000 people were killed or forcibly disappeared between 1960 to 1996; a U.N. commission concluded that the bulk of human rights abuses were committed by the government. Many powerful business and military interests continue to evade accountability for the war and the issues that sparked the conflict — namely economic and political marginalization — remain unresolved.

“We had an internal armed conflict for 36 years and signed a peace accord in 1999,” Ruiz told The Washington Diplomat in her first interview with any U.S. media outlet as ambassador. “We have worked very hard to advance a system that will offer opportunities to everybody. We have made a serious, well-intended effort to defend human rights and the rule of law.”

Ruiz, who was born and raised in Guatemala, speaks perfect English thanks to her years as an exchange student at Detroit’s Our Lady of Mercy High School. She earned her law degree from Guatemala’s Universidad Rafael Landívar in 1973 and was an independent litigator in civil, constitutional and trade law cases before joining the public sector. In the past, Ruiz has argued for greater access for Guatemalan bananas to the European market and represented Guatemala in the Uruguay Round to establish the World Trade Organization (WTO). In 2000, she was appointed ambassador to the United Kingdom, where she served for three years until running for vice president in Guatemala’s presidential election in 2003.

“Guatemala is doing economically well, but we still need better market access opportunities for the products in which we are competitive,” she said, noting that Guatemala now has free trade agreements in effect with the United States (through the Central American Free Trade Agreement, or CAFTA), as well as with the European Union and Mexico. 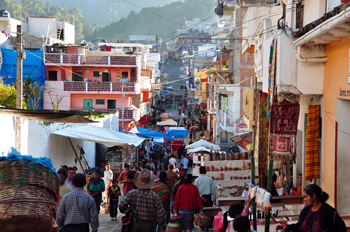 Guatemalans roam an outdoor market in Chichicastenango, known for its traditional Maya culture.

Ruiz has served on several bodies that oversee the global coffee, maritime and sugar industries. Even more importantly, in 2004 she helped establish the United Nations-backed International Commission Against Impunity in Guatemala (CICIG in Spanish), which works with national prosecutors to dismantle clandestine security groups that continue to operate despite the end of the civil war.

“I negotiated the first efforts that evolved into what today is called CICIG,” she told us. “We should all be satisfied that so many countries have supported us, including the United States, in this effort and that our president has agreed to extend the mandate of CICIG for another two years.”

CICIG targets secret groups that undermine the state, “though their main goal now is economic power, not elimination of political opponents,” according to the International Crisis Group, which wrote about CICIG in a January 2016 report.

“International support and financing guarantee the commission’s independence, though it operates under Guatemalan laws. Unlike traditional capacity-building efforts, it not only trains, but also works side by side with national prosecutors and police, providing them with the necessary technical expertise and political autonomy to hold powerful suspects accountable before the law,” the Crisis Group said.

The agency works hand in hand with Guatemala’s highly regarded public prosecutor, Thelma Esperanza Aldana Hernández, whose tireless investigation of Pérez Molina led to the former president’s impeachment and arrest. In a November 2015 speech at the Wilson Center, Aldana — a close friend of the new ambassador — said that support from CICIG, an entity Pérez Molina had tried to dismantle, had been absolutely critical in bringing the president down.

Another important issue the government faces is migration, especially in a U.S. election year in which Republican presidential candidate Donald Trump has vowed to build a wall on the border with Mexico to keep immigrants out.

While overall migration to the U.S. from Mexico has been down or stable since the 2008 recession, the number of unaccompanied minors crossing the Rio Grande from Mexico into Texas is rising again after a similar spike in 2014.

“Latin Americans have made valuable contributions to make this country what it is,” Ruiz said. “We understand that migration in recent years has become a security concern. But we are confident that the United States will support our efforts to improve the economic situation of our citizens, because that will encourage them to stay in Guatemala.”

In a November 2015 New York Times op-ed piece advocating for the plan, Vice President Joe Biden wrote that “the economies of El Salvador, Guatemala and Honduras remain bogged down as the rest of the Americas surge forward. Inadequate education, institutional corruption, rampant crime and a lack of investment are holding these countries back.” 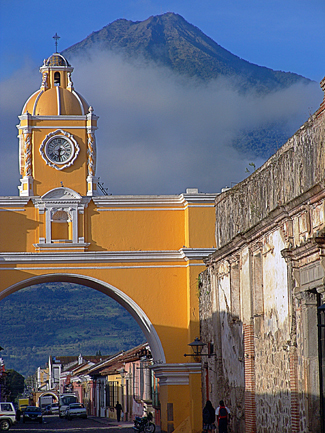 The city of Antigua Guatemala is famous for its Spanish Baroque-influenced architecture and has been designated a UNESCO World Heritage Site.

But critics of the plan say it could backfire, benefiting the country’s political and corporate elite while exacerbating poverty and the migration crisis.

After reaching record high levels during the spring and summer of 2014, the flow of Central American unaccompanied children and families arriving at the U.S.-Mexico border declined sharply — but has since begun to climb again. Along the southwest border, U.S. officials apprehended 32,952 unaccompanied children ages 17 or under during fiscal 2016, up dramatically from the 18,889 who were taken into custody in fiscal 2015 but still less than the 36,280 who were apprehended in fiscal 2014, according to U.S. Customs and Border Protection.

In fiscal 2016, more Guatemalan children (10.717, to be exact) presented themselves at the border than kids of any other nationality — partly a reflection of the country’s sheer size compared to its neighbors, but also a result of Guatemala’s high levels of poverty.

Among other things, the Alliance for Prosperity earmarks U.S. funds to further strengthen the Guatemalan Public Ministry and CICIG. It also seeks to create a similar anti-corruption body in Honduras.

It’s still unclear how much of the $750 million will go to Guatemala, said Ruiz.

“Let’s improve the lives of Guatemalans in Guatemala, and they will stay there. But of course our government supports migrants who live in the United States,” she said, estimating their number at around 1.6 million. “We want them to feel like part of the solution. In fact, the president recently inaugurated a call center for migrants in four Mayan languages plus Spanish. Calls to our consulates have actually gone down because people find out what they need to know by calling the new call center.”

Ruiz, who has served as special advisor to Guatemala’s foreign affairs minister on a number of issues since 1996, is also an expert on one of her country’s most enduring problems: Guatemala’s territorial dispute with Belize. Formerly known as British Honduras, the sparsely populated nation of 340,000 people is slightly smaller than Massachusetts.

Ruiz declined to discuss Guatemala’s claims in detail, but on all official maps of Guatemala, Belize appears shaded in, as if its very status as a country is in dispute. In April, Guatemala — which in the past has claimed more than half of its English-speaking neighbor — deployed about 3,000 troops to the border following a shooting incident that killed a Guatemalan teenager.

Each side accused the other of triggering the violence, even though talks have been ongoing for years to resolve the territorial dispute.

“I can assure you these incidents have never been provoked by the Guatemalan Army [but] by the defense forces of Belize, and in that respect, the Organization of American States has played a very positive and significant role because they investigate these incidents,” said Ruiz, who has been working on the issue for 20 years.

Despite the simmering tensions, she said, “We now have an excellent opportunity to solve that territorial, maritime and island dispute because both Belize and Guatemala have agreed to submit their case to the International Court of Justice. A number of procedures in both countries have to be completed, but the political will for both countries to solve the issue is there.”