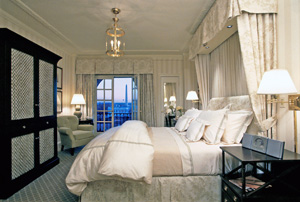 Washington, D.C., has no shortage of hotels running the gamut of international chains to mom-and-pop boutiques. Within its 68 miles, the District has 28,304 rooms in 119 hotels serving about 17 million tourists each year, according to Destination DC, the city’s tourism marketing arm. With that much competition, hotels are constantly trying to outdo the other in service, amenities, price and creative packages to set themselves apart. But ultimately, a hotel’s personality is what makes or breaks it, and the easiest way to convey character is through style — that signature design and ambience that define a property.

The Diplomat takes a look at three hotels with completely different and distinctive styles to see how their décor expresses the message they want to send. Their looks embody the inherent variety of Washington’s hospitality scene: classic elegance, trendy luxury and Asian Zen.

The Hay-Adams hotel’s “understated elegance,” as Director of Operations Colette Marquez describes it, has attracted a political who’s who since opening in 1928. The most recent president to stay there was Barack Obama ahead of his inauguration in 2009. The draw is logical. The hotel — in addition to being located on Lafayette Square directly across from the White House — was once the site of the homes of two men with presidential ties. One was John Hay, private secretary to President Abraham Lincoln, ambassador to Britain and secretary of state under Presidents William McKinley and Theodore Roosevelt. The other was Henry Adams, a descendant of Presidents John Adams and John Quincy Adams. When Henry Adams died in 1918, his home was leased to the Brazilian Embassy.

Washington developer Harry Wardman bought and razed both homes in 1927 and an Italian Renaissance-style apartment/hotel building called the Hay-Adams House took their place. Designed by a Turkish architect, the 138-room house cost $900,000 and featured Doric, Ionic and Corinthian orders; walnut wainscoting; and carved ceilings with Tudor, Elizabethan and Italian motifs — most of which are still present today. Wood paneling from Hay’s house was used in the ground-floor public space today called the John Hay Room.

In 2001, the hotel closed for several months to undergo a $20 million renovation overseen by D.C. designer Thomas Pheasant. (A more recent renovation added a new 3,200-square-foot rooftop event space known as Top of the Hay.) The result is a 146-room hotel with an average price per night of $475 and a classically Washingtonian look. Much of the original European influences remain, including the intricate ceilings and wainscotings.

“We obviously left all the historical details alone,” Marquez said. “We augmented it with a very simple but very elegant look.”

The palette is monochromatic with creams and light grays dominating, a far cry from the deeper reds and blues that were there before, Marquez noted.

“The feedback that we get from our guests a lot is that it’s really calming,” she said. “You come from a hectic day dealing with business or politics and then you come here and it’s warm and calm and soothing. There’s not a lot of pattern. That’s very important because it goes with what we want to portray as a residence. You want to feel at home.”

But there are some unusual touches, such as sepia-tone photographs of D.C. by local artist Sora DeVore.

“It’s not the artwork you would expect in a traditional hotel environment,” Marquez said. “I think that makes it really interesting because you have these really classical details and then some of these fun and unexpected little touches.”

A stand-alone hotel with no big chain owner, the Hay-Adams can be deceiving. Despite the original brass doorknobs, air-conditioning grills and fireplaces in guestrooms, the hotel is decidedly up-to-date. Rooms have iPod docking stations, the whole building is wired for Wi-Fi, and automated shades on windows in meeting rooms at the Top of the Hay can be operated with the swipe of an iPad.

For all of the Hay-Adams’s inner beauty, the one aspect that is truly unparalleled is its view, an enduring characteristic of the property’s appeal. Lower floors have an unencumbered view of Lafayette Park while higher floors and the Top of the Hay look down on the White House, Old Executive Office Building and St. John’s Cathedral.

If the Hay-Adams is a who’s who of politicians, the W is the place for celebrity sightings. Pop singers Lady Gaga, will.i.am and Sean “Diddy” Combs have been seen within the hotel’s modern-luxury environs. When the W opened in July 2009, the building’s look was transformed from D.C. classic to urban chic to match its hipster guest list. On the National Register of Historic Places, it had been for 90 years the more subdued Hotel Washington, whose own hip claim to fame was being the only hotel in which Elvis ever stayed in Washington. (He penned a letter to President Richard Nixon asking to become a Drug Enforcement Administration agent from his room.) Marilyn Monroe also laid her blonde locks here, and “No Way Out” and “Godfather 2” were filmed here. 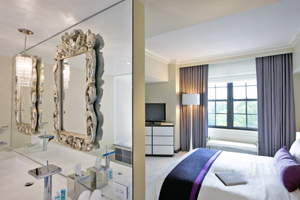 But the glam factor was taken to a whole new level when the trendy W hotel brand came to town. Designer Dianna Wong preserved the historic building’s Beaux Arts architecture while adding plenty of stylish touches in line with her theme: pinstripes and lace, “her theory being that while everybody thinks the power in Washington comes from a pinstripe suit, in actuality all power in this town comes from the negligee,” a hotel spokesperson said.

The building dates to 1917, with parts going as far back as 1888, and many of the original features remain intact — now even more striking as they stand alongside the funkier elements for which the W brand is known. For instance, in a front meeting room hang two paintings that where in that section of the building when it housed the Washington Stock Exchange. They’re in stark contrast to the large, glittery Marilyn-esque close-up piece of art hanging in the hallway outside the room. A ceiling-mounted stained-glass window, plaster moldings on the ceilings, and tall marble planters in the lobby are original, as are the chandeliers, although they were redone with LED lights that change color throughout the day, ending in a midnight blue. And the lobby is no longer called a lobby — it’s the “living room,” a room that would make Alice in Wonderland proud.

At the living room’s entrance is a faux fireplace with a screen showing a video of beautiful women where a fire would be, exuding a different kind of heat. The room runs the length of the first floor with the glitter-studded Jewel Box bar — which plays off the reception area designed to look like the inside of a jewel box — at one end and seating in bold black, white and gray with splashes of red patent leather. Many of the chairs have a pinstripe fabric while the rugs evoke lace.

Every W, operated by Starwood Hotels and Resorts Worldwide, has what the company calls a secret space. In D.C.’s hotel, it’s the former check-in desk, which was gutted and filled with a bronze booth and outlets in the floors for laptops. It’s secret because the curvature of the former desk prevents passersby from seeing what’s on the other side.

Corridors and guestroom doors continue the pinstripe-negligee premise. The doors have a lacey paint job while the carpeting incorporates both lace and pinstripes in its pattern. Furniture is sleek, simple and modern, but the rooms (starting at $299 a night) still surprise. For instance, WOW suites have a recessed ceiling rimmed with a colored light.

W raised the bar — literally. It transformed the rooftop into P.O.V. (point of view), a rooftop outdoor bar adorned with red tree branches dripping in crystals as well as an indoor space providing some of the best views of the Washington Monument in the city.

“It’s that one hotel that’s at that cross-section of luxury and modern,” the spokesperson said. “This is the new Washington. When Obama brought in staff from New York, L.A. and Chicago, it kind of changed everything.”

Perhaps the area’s best-known Asian connection comes in the form of tiny pink flowers that blossom every spring, and the Asian-infused Mandarin Oriental is perfectly poised across from the Tidal Basin for a view of the annual cherry blossom bloom. Of course, the hotel’s ties to the East are obvious without even seeing the interior. 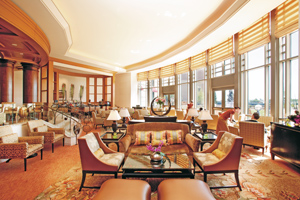 Contemporary Asian influences abound in the Empress Lounge of the Mandarin Oriental in Washington, D.C.

“You’re coming to a place called the Mandarin Oriental. That infers there’s going to be some Asian influence, but you’re still going to come in here and say, ‘Oh, this is furniture I would have in my house,'” said Linda Beltran, communications director at the hotel.

The Asian infusion starts at the check-in desk, where two large contemporary Mandarin riding jackets hang. Upon arrival, guests receive a hot or cold drink and hot or cold oshibori towel, depending on the weather, which is common practice abroad.

“That’s something that is pretty unique to Mandarin or is actually quite universal at any hotel in Asia,” Beltran said. “I think our ultimate goal is to provide a luxury experience in Washington, D.C., but I think you always want to try to elevate the customer experience by using our influences. That includes an Asian-inspired service level as well.”

As you walk toward the elevators, it’s tough to miss a huge oil painting of the Empress Dowager dressed in Chinese kimono swinging over D.C.’s iconic sights. The hotel, run by the Mandarin Oriental Hotel Group based in Hong Kong, commissioned the painting, which is a reproduction of a painting showing her swinging above Shanghai.

The 400 guestrooms are laid out according to the principles of feng shui, a Chinese system of arrangement to promote the positive flow of energy. And over the beds in each standard room is a different hand-woven silk Thai obi panel. “That’s somewhat of a signature for us,” Beltran noted.

Other touches in the standard deluxe rooms, which go for $695 during the week and $495 during the weekends, include drapery with pictures of pagodas and shrines, books about Asia and traditional teapots.

In addition to sweeping views of the Jefferson Memorial, Tidal Basin and Washington Monument, the 3,500-square-foot, $15,000-a-night presidential suite is a prime example of the Mandarin’s East-meets-West philosophy. Two black lacquer cabinets with traditional gold inlay bookend the foyer, while in the powder room sit a vase and tissue box with Japanese women and cherry blossoms on them, with Asian-inspired pillows flanking the bathtub. In the corridors is artwork with Asian characters.

“It’s modern but it’s not kitschy,” Beltran said, “which is the décor throughout the hotel.”