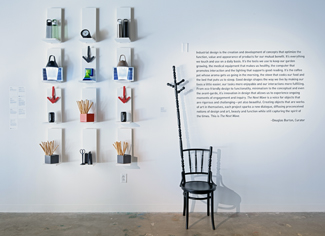 The centerpiece of the Washington, DC International Design Festival is “The Next Wave: Industrial Design Innovation in the 21st Century,” a 4,000-square-foot exhibition at Artisphere featuring 150 products made since 2000 in 15 countries.

Have you ever considered why a doorknob is shaped a certain way or why drawers open in only one direction? Douglas Burton thinks you should. That’s why he curated the first-ever Washington, DC International Design Festival highlighting achievements in contemporary industrial design.

“I think many people don’t know what industrial design is,” said Burton, co-owner of Apartment Zero, a Washington-based design studio, retail space and gallery that helps industrial designers worldwide showcase their works and concepts through collaborations with area embassies, museums and universities. “When I heard the words ‘industrial design,’ I thought of something that was made in industry, something that was made out of metal or glass, but it encompasses so many of the things we use and touch and see every single day.”

Industrial design applies to everything from toothbrushes to cars. It combines science and aesthetics to improve these everyday products and entice people to use, keep and admire them.

“I believe that industrial design has become kind of a new art. In every single art magazine or fashion magazine, there’s always a design spread — whoever the new hot star architect is or whoever the new hot product designer is,” said Burton, who partnered with Artisphere, an arts venue in Arlington, Va., to present the festival. “Before, most people would just buy a generic object. Now I think people are seeking out products designed specifically by famous industrial designers” such as Philippe Starck and Jasper Morrison.

The festival, which runs through May 19, is produced in collaboration with the embassies of Italy and Spain and their cultural arms. In addition to a series of free public programs, the main attraction is “The Next Wave: Industrial Design Innovation in the 21st Century,” a 4,000-square-foot exhibition at Artisphere featuring 150 products made since 2000 in 15 countries, including Spain, Italy, Belgium, the United Kingdom, Scandinavia, the Netherlands and the United States. Pieces include lighting, tabletops, furniture, textiles, products, electronics, house wares, tools and interactive designs. The objects were selected to explore themes such as eco-friendly design, functionality, minimalism, the conceptual and the avant-garde. 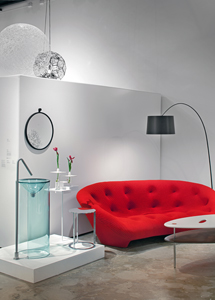 Three items to look out for, Burton said, are a set of dresser drawers called “Raw Edges” by the British design and manufacturing company Established and Sons that can be pulled out either from the front or back because of a column hidden down the piece’s center; “Big Bang,” a tall, totem pole-style lamp made by the American firm RUX Design, which carved out recycled wood and put in tiny LED lights; and U.S.-made BioLite Stoves that can be used to safely cook with wood indoors because they convert heat to electricity that can power something else, such as LED lights or a mobile phone.

“Design, particularly contemporary furniture design, is very important in Spain,” said Guillermo Corral, cultural counselor at the Spanish Embassy. “Big names such as Patricia Urquiola and Jaime Hayon as well as a number of small companies produce very innovative and exciting pieces. A show like this is a great way of introducing the American public to a key aspect of Spanish creativity.”

For Italy, the festival is also a cultural bridge. “Design is one field where Italy has given a great contribution, and it is an example of how economy and fine arts can go hand in hand,” said Alberto Manai, director of the Italian Cultural Institute.

“When you think of Italian design, most people think of something that’s elegant, that’s sophisticated, it’s very minimal, it’s something that’s designed to be very clean and functional and simple,” he said. “I call it super minimalism. It’s so elegant, it’s so beautiful, but they achieve so much with so little.

“The Dutch, on the other hand, are all about whimsy, and they love design that is offbeat and a little jaded here and there — things that are conceptual — so it’s the idea behind the design that’s much more important than the finished product,” he added. “Yes, they want it to be functional, but they also want it to be unusual and they want to make you think when you look at it.”

There are four trademarks of Italian design, Manai said: details, the marriage of handicraft and technology, experimentation in materials, and simplicity. “In an Italian design object, there are no secondary parts. Every detail is designed and worked on as any other, even if it is mostly hidden,” Manai explained. “The cycle of life of a piece of furniture, for example, was not measured on ever-changing trends, but on generations.” 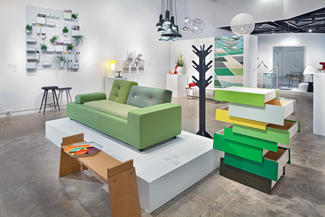 Corral defines Spanish industrial design as inventive and playful. “Spanish designers love to look at daily objects and transform them in ways that are stunning, surprising and aesthetically pleasing, [as] opposed to other schools of design that are more interested in the technological or utilitarian aspects.”

“I think Americans are much more interested in craftsmanship,” Burton observed. “They really want to show that this piece is being handmade, [with] solid woods and honest raw materials like wood and metal and leather.”

To explore his theory, the panel discussion “Oh Say Can’t You See: What Happened to American Design?” will take place April 20 at 5 p.m. at Artisphere. Other events include a May 15 talk with Italian industrial designer Roberto Palomba.

In addition to the exhibition, the festival includes an online competition called “Juxtaposed: An Interactive Photo Contest,” in which entrants take two or more seemingly disparate yet relatable products and put them together in an unusual way, such as a lawn mower going over a shag rug or a can opener opening a crystal vase, Burton said. First prize nets $500.

In the past, Apartment Zero has featured one-person exhibitions, but Burton decided to expand this time around. “There are so many incredible things being designed that I thought if I could pull from many different areas, I could expose people to more unusual and interesting things that then will end up as conversation pieces.”