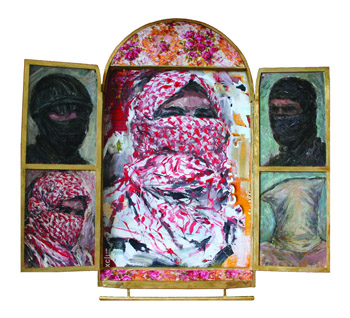 Lebanon’s Artists Sort Through the Wreckage of War

The Katzen Arts Center at American University continues to be a museum that in its exhibition selections exposes the world to Washingtonians like no other place in the city. And “Convergence: New Art from Lebanon” contains the aspirations, fractured history and still unraveling reality of an entire country. The art is spot-on in echoing contemporary flashpoints in the Middle East, even though the works more so address the aftermath of Lebanon’s devastating civil war from 1975 to 1990.

The exhibition features 50 works by 29 artists — offering up everything from installations, paintings, photography and photo montages to videos, sculpture and items hard to categorize. But all of them are in tune with the muted, mournful music that arose from the debacle of war, when a whole range of competing forces all but destroyed a country once considered a cultural flower in the region.

Early on in the multifaceted conflict, Israel invaded Lebanon, not for the last time, in pursuit of its arch nemesis, the Palestinian Liberation Organization, fanning the flames among an already-explosive mix of ethnic and religious factions. After 15 years, the deaths of an estimated 130,000 to 250,000 people and the wounding of another 1 million, no one really knows who won — the war is often described as a conflict that tired itself and everyone else out. But in many ways, while Lebanon has achieved a semblance of calm, the country is still beset by both internal and external tensions, from Hezbollah to Syria to Israel, so in a very real sense the war can ignite at any moment as it did not that long ago.

Artists may be the perfect actors on the scene to not necessarily make sense of it all, but to show the true emotional and physical cost of war — the human suffering, loss, destruction and blood of innocents. 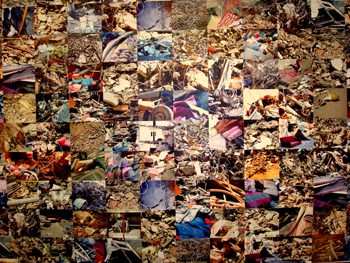 Hope, in many of these works, is either bleeding or fleeting. Even the most abstract, difficult pieces to interpret in this exhibition are content-laden with the haunting effects of the conflict on those who lived through it, observed it close up, and no doubt woke up in the middle of night dreaming about it time and again.

The exhibition — co-curated by American University Museum Director Jack Rasmussen and Amal Traboulsi, a notable Lebanese and Middle Eastern curator — is not a timeline or record of the conflict. Rather, it conveys an overwhelming sense of loss — a loss of normalcy, of comprehension and of the innocence that gradually seeps from daily life when everything around you is not just falling apart but blowing up, leaving only debris and pain.

Baalbaki’s work is made up of five vivid, sharply yet roughly painted heads, with one at the center, flanked on each side by two other heads. They are familiar figures, thanks to television and media images, and depending on your point of view, can be viewed as a terrorist, a revolutionary or even a hostage under a hood — faces hidden by scarves as red as blood. It could be a man, woman, bomber, hostage, masked executioner or intellectual rebel. Yet it resonates no matter what identification you give to the people because you know the stakes of what’s involved.

Sehnaoui’s large construction made up of hundreds of photos of varying sizes depict the ordinary stuff of everyday life — clothes, luggage, furniture, toys, sticks, wallets, photos and pieces of paper. The thing is, every bit of those items has been rendered useless, having been shattered to bits by war, much like the lives of the people who once touched these objects and were comforted by their presence.

In both works, the familiarity with the content is discomfiting and makes the heart uneasy. Sehnaoui trudged through the remains of a suburb in southern Beirut in August of 2006 to survey and capture the aftermath of yet another violent confrontation, this time with Israel. She writes: “Art keeps me whole when looking at rubble.” 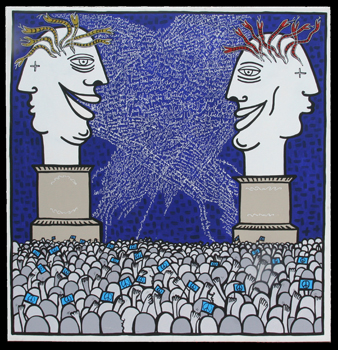 Interestingly, Chawky Frenn’s “Golgotha” depicts a mountain of shoes eerily reminiscent of the shoes at the Holocaust Memorial Museum that stop viewers in their tracks. It’s a reflection of how this display is both a universal experience of loss and the suffering of a particular place.

“Convergence” is an apt title for this show, in which pain and art, anger and confusion, past and present converge, as do Lebanon’s diverse ethnic and religious traditions. That diversity has been both a blessing and a curse for Lebanon, enriching the society while fueling its divisions. The country remains a minefield of divisions and external pressures, as well as a beautiful tapestry of culture. This show reminds us that though the war may be over, Lebanon still deserves our attention as it charts its future and works to reclaim an identity in part defined by a people’s shared pain and potential.