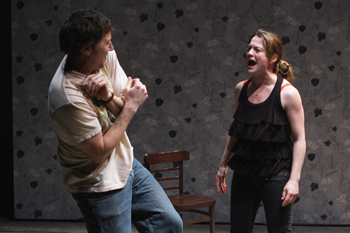 Neil LaBute and his brutally honest observations on the war of the sexes return to the Studio Theatre for an extended run this month with a darkly entertaining, if somewhat uneven, production of “Reasons to Be Pretty.”

The obsession with physical perfection rears its ugly head in Neil LaBute’s “Reasons to Be Pretty,” starring Ryan Artzberger and Margot White as dysfunctional couple number one, above, along with Thom Miller and Theresa Stephenson as their equally dysfunctional cohorts.

“Reasons” marks the third time Studio has staged a LaBute play that examines the notion of physical attractiveness — and the obsession with physical perfection — in America. “The Shape of Things” and “Fat Pig” marked the first two segments in the trilogy. With “Reasons,” the third time is definitely not the charm. That’s not because of any particular flaws in the production, but because LaBute doesn’t do charm — he does bile, rage, scorn and vindictiveness. And he does them very, very convincingly. “Reasons” maintains LaBute’s typical jet black standard — at least until about midway through the second act, when some semblance of understanding and even compassion begin to seep into the dialogue.

The play centers on a conflict between Greg (Ryan Artzberger) and his girlfriend Steph (Margot White). As so often happens in relationships, this particular conflagration ignites not out of malice by either party but from an insensitive, offhand remark. In this case, Greg makes a casual comment about his girlfriend’s attractiveness while drinking beer and working on a car in his buddy Kent’s (Thom Miller) garage. The observation isn’t mean-spirited, but it’s not exactly nice either. Unfortunately, the comment makes its way back to Steph via Carly (Teresa Stephenson), Kent’s wife and a friend of Steph, who overhears it from the kitchen and immediately calls Steph to tell her about it.

I spent the first act of the play wondering why in the world Carly would relay a relatively benign yet still hurtful remark to her friend. Then again, like most men, I don’t profess a deep understanding of the female psyche.

In any case, news of her boyfriend’s insensitivity sends Steph into an unrelenting fit of anger. The first 10 minutes or so of the play center on Steph (who is not at all unattractive) excoriating her boyfriend in a rant so profane it prompted one member of the audience to lodge a mild complaint during a question-and-answer session after the play. Steph is furious and humiliated — but most of all deeply hurt.

The opening sequence of the play effectively sets the mood — tense and bleak — for most of the rest of the production. Steph and Greg are convincing as a couple in the heat of a pitched verbal battle. Greg is tall and relatively physically imposing, but the diminutive Steph overpowers him with her visceral rage and vein-popping physicality. She stops just short of hauling off and slugging Greg. Ultimately, she’s so disgusted that she storms out on a four-year relationship, leaving Greg befuddled and deeply wounded himself.

Later in the play, she returns to eviscerate Greg’s own appearance in a scene that is so emotionally brutal it’s difficult to watch — and classic LaBute.

After the dramatic opening scene in Steph and Greg’s apartment, the play shifts to Greg’s workplace, a drab warehouse where he and Kent pack boxes all day long. It’s not clear what they’re packing, an ambiguity that serves to heighten the drudgery of their work. Carly, Kent’s pretty wife, also works at the warehouse as a security guard. The momentum lags throughout the remainder of the first act, as we get to know Kent, a macho simpleton, and Carly, a slightly snide woman who is also no intellectual giant. 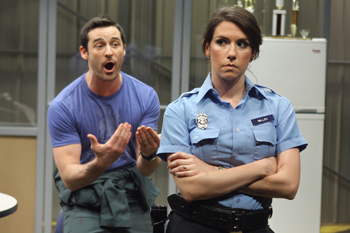 In the second act, Carly, who threw Greg under the bus earlier in the play, comes to him later at work and asks about suspicions that Kent is cheating on her. Greg, a thoughtful bookish type despite his job as a menial laborer, eventually softens up and begins to sympathize with Carly, and to see his friend Kent as the jerk that he is. This sort of evolution in the male species is not something LaBute is known for and comes as a bit of a surprise for anyone familiar with his body of work. LaBute typically excels at portraying men at their worst. In “Reasons,” he gives them — or at least Greg — a glimmer of humanity.

The play opened to rave reviews in Washington. But while the acting is solid and at times excellent, I expected a bit more from the dialogue. The typically provocative LaBute demonstrates that he can still stoke controversy in “Reasons,” but for some reason — perhaps because his characters are not as sophisticated and educated as usual — the exchanges among the characters occasionally seem a bit banal and melodramatic. That said, the pacing, especially in the second act, is brisk and the direction is solid.

Overall, LaBute still gives us plenty of reasons to want to see, and think about, “Reasons to Be Pretty.”