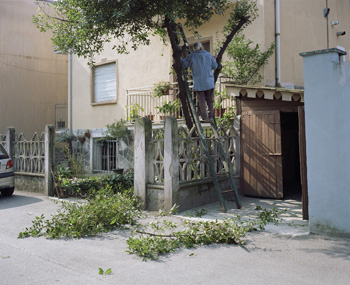 Anne Lass, a young European photographer based in Berlin, gives Washingtonians something to think about in the slim but plenty-haunting photo exhibition “In Our Time” at the Goethe-Institut.

The 12 photographs are part of a larger series with the similarly vague title of “The Geography of Nowhere.” The Goethe’s own description of the images is equally esoteric: “The places in the photos seem familiar, the people almost recognizable, the situations common, everyday. They show normality — so normal that it’s disconcerting.”

The result is that viewers go back to these 12 images, scouring them for clues, trying to figure out who the people are and where they are, as if trying to connect an obscure memory that you just can’t put your finger on.

“It is above all in urban living environments where I find the tensions that I take as the model for my work: tensions between the functional and individual self-realization, in our relationship to nature, in the concurrences of narrow confines and wide open space, and not least of all, in all of human interaction,” Lass has written in references to the “The Geography of Nowhere” series, and therefore this selection of photographs.

This is somewhat artist-speak, but some key descriptions jump out, including the references to urban living environments, narrow confines and wide open spaces. 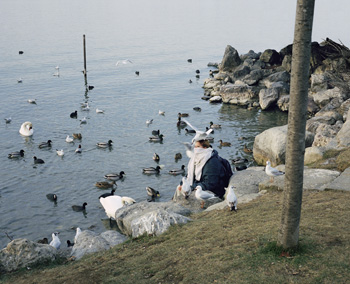 The photos, with some exceptions, seem deceptively simple, as if Lass had just stumbled upon a scene, a framed idea, and shot the picture then and there, and moved on. The settings are instantly recognizable: people in parks, bustling cityscapes, glass and concrete buildings interspersed with recreational natural spaces.

Although recognizable on some level as an urban setting, the photographs are not recognizable as a specific place, as in Milwaukee, Berlin, Australia, Hungary and so on — all places where Lass has lived and worked. There are no landmarks here, only people in a specific environment.

Two men for instance, wearing jeans and short-sleeve pullovers, are spied walking small in the foreground of a clearly American municipal building with huge Ann Taylor storefront windows. In another picture, a man is seen pruning a tree in what looks like a suburb, perhaps in the aftermath of a storm, perhaps not. A young girl careens down a sidewalk against the background of big, white houses. A group of apparent worker-bee types have gathered in a dry, nondescript city atmosphere near a concrete park, ill-used by appearance, as some bushes and a thin tree break up the decrepit scene. In a nicer park, a man lies completely flat on the grass taking in the sun above. And in another photo, a woman sits on rocks by a river as seagulls descend on her, almost like the blackbirds in Alfred Hitchcock’s sinister “The Birds.”

Some of these photographs seem almost staged, contrived. It’s not that they’re particularly dramatic — it’s as if they hint at drama to come or only recently happened.

The one image most striking for its potential for drama is a photograph of a very young blonde girl in a bathing suit, poised to jump into a woodsy stream or river, surrounded from above by five watchful guys. There’s a certain expectation, energy and tension that some of the other works don’t have. We don’t truly know what’s going on here, but the anticipatory expressions on the young men’s faces, and the uncertainty on the girl’s face, are fraught with the notion of impending resolution and action.

But all of the images in some way depict resting, recreation, taking a break from the computer, although from there any interpretation goes. In this way, they certainly capture aspects of city life, although the most obvious features — cell phones, iPods and other elements of urban connectivity and communication — don’t make an appearance here. Rather we see the open spaces and green parks that are a part of urban life but often get overlooked.

To that end, “In Our Time,” a continuation of Goethe’s emphasis on emerging photographers, reminds me of Goethe’s last exhibition, “Roads and Paths: Photographs by Bernhard Fuchs” (also see “Road Less Taken” in the March 2009 issue of The Washington Diplomat). Fuchs explored the most mundane areas of his rural Austrian hometown in a series of pictures that, in their ordinariness, managed to elevate the everyday material — sunken roads, worn-out paths, fences, trees, leftover snow — to a state of empathic glory. In a similar way, Lass does this for her urban people and settings, forcing us to rethink common situations that may belie extraordinary circumstances. Or maybe not. In the end, the answers lie inside us, not in front of us.