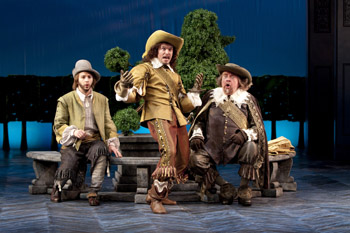 Everyone knows the expression “everything sounds better in French.” So what about a French 17th-century play written in rhyming couplets, loosely translated into English rhyming iambic pentameter? Even better! Especially when Broadway playwright David Ives holds la plume, as he did while penning the Shakespeare Theatre’s world premiere adaptation of Pierre Corneille’s farce “The Liar.”

Just as Corneille shocked his French audiences by creating an amoral, carefree leading man, Ives delights in surprising modern-day audiences with outrageous comedy. “The Liar” in fact is like one large comedic roast — no one escapes the fiery but merry ridicule.

But don’t let the play’s intricate poetry throw you (as one of the actors assures us during the prologue). Ives manages to translate ancient stanza into accessible verse — a feat he terms “translaptation,” in other words translation with a heavy dose of adaptation. Aptly called a master of linguistics by Michael Kahn, Shakespeare Theatre’s artistic director, Ives spins an elaborate web around his characters and the audience, using nothing more than rhyming puns, spiky wit, uncomplicated humor and a lot of poetic license. The result is a knockout. Cheeks, get ready for a workout.

Kahn, who also directed the play and was spotted sporting a huge grin during its press night, has good reason to be tickled. With the success of this play, his master plan to bring unknown scripts to the masses appears to be on fire. “The Liar” is the first script to be published as part of the Shakespeare Theatre’s “ReDiscovery Series,” a program that adapts classic, foreign-language plays that are rarely performed today.

The premise of “The Liar” is simple. Lead character Dorante, a charismatic, debonair young chap gifted with pathological dishonesty, turns an otherwise quiet French town into an intriguing mess. Dorante’s outlandish embellishments and life boasts are believed, if not celebrated, by all whom he encounters.

Even the laundry list of character names is a linguistic lesson in approximate minimal pairs and near rhymes. Dorante dupes his naïve father, Geronte; love interests Clarice and Lucrece; jealous rival Alcippe; Alcippe’s friend Philiste; and identical twins Isabelle and Sabine, who, of course, have opposite personalities to make things more interesting. And lastly, there’s Cliton, Dorante’s servant, who stands out as a non-rhyming name and narrator of the story.

Is this word play corny? Absolument! Do we hold that against it? Mais non! 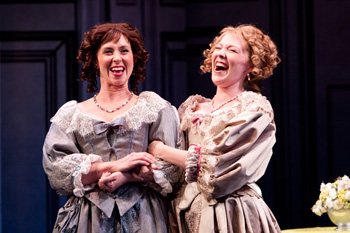 The casting is also spot-on. Dorante is skillfully portrayed by actor Christian Conn (yet another, albeit unintentional, pun). David Sabin, here as the father, often plays the same gullible clown in Shakespeare Theatre productions, although in every instance he nails it. Adam Green is perfect as Dorante’s eloquent but tortured sidekick, Cliton. Best friends Clarice and Lucrece are portrayed by Erin Partin and Miriam Silverman, respectively, while Colleen Delaney rushes on and off the stage as both twins Isabelle and Sabine (after her final God-speed entrance, she cheats to the audience, “I didn’t think I’d make it!”).

The characters play out their madness in a lush, clever set designed by Alexander Dodge, complete with a mammoth poodle-shaped hedge and cartoonish trees. All the while, they’re done up in frilly period costumes full of lace and feathers, thanks to the very capable costume designer Murell Horton.

Overall, “The Liar” works because it turns everyone’s nightmare into an all-out laugh romp, while proving an embarrassing universal truth: Humans succumb to trickery if simultaneously charmed and entertained. Ives spells this out for us beautifully.

Seeing Dorante’s surprising success with his unabashed sham, Cliton, who unfortunately struggles with telling truth to a fault, begs him for a lesson in deception. Dorante soberly explains (while satirically poking fun at Shakespeare), “All the world’s a lie and all the men are liars. People are in denial and the liar knows this.” People are paranoid and expect and dread the worst out of life, he says. That’s where the liar steps in, during their moment of insecurity, to give what they want to assuage their fears, for which they are grateful. Maybe then it’s not Dorante, but all the others who are to blame for their delusions. Or so Dorante would have you believe.

In the end it really doesn’t matter who is to blame. It is the journey that is important. To quote Dorante, in a possible subliminal advertisement for the play, “The unimagined life is not worth living.” That’s certainly a universal truth — and as good a reason as any to go to see this play.