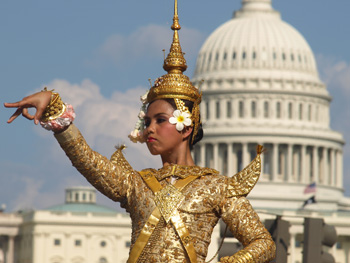 The citywide international showcase Passport DC, now in its third year, teams up with the National Asian Heritage Festival for the Fiesta Asia Street Fair on May 22, which caps off three weeks of Passport programming at dozens of embassies and other venues around Washington.

Spend a month traveling the world for next to nothing, tasting exotic foods, learning foreign dances, and mingling with the locals without the hassle of luggage, airline delays or even passports. Sound impossible? Thanks to Cultural Tourism DC, it’s not.

Previously a two-weekend event, the third annual Passport DC has evolved into a month-long international celebration. Events include Cultural Tourism DC’s Around the World Embassy Tour on May 1 featuring 35 foreign missions; Shortcut to Europe: EU Embassies Open House on May 8; the Meridian International Children’s Festival on May 15; and the 5th annual National Asian Heritage Festival, with Passport’s grand finale, a “fiesta Asia” street fair, on May 22.

“This year we realized that we had four major events going on the four Saturdays during May,” said Linda Harper, executive director of Cultural Tourism DC. So her office worked with the city and District Mayor Adrian Fenty to proclaim the month of May International Cultural Awareness Month in Washington.

Passport DC is based on two ideas, Harper explained: recognizing the role that D.C.’s international community plays in the area’s culture, and improving communication between residents and the city’s 175 foreign embassies, residences, chanceries and diplomatic missions. 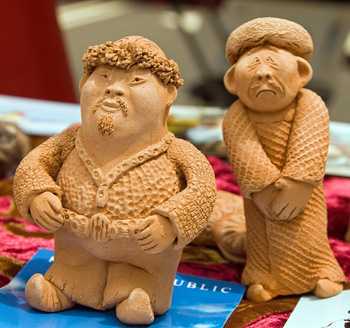 The Around the World Tour is an open house-style event at 35 embassies, including Australia, Bangladesh, Botswana, Haiti, Japan, Indonesia, Kyrgyzstan, Mexico, Nigeria, Pakistan, Saudi Arabia, Ukraine and Zambia. Besides getting a glimpse inside the buildings, visitors get star treatment. “It’s not just walk in, pick up a tourist brochure, walk out,” Harper said. “The embassies have dance groups and music and food and drummers. The Thai Embassy is doing Thai massage. One of the other embassies is doing henna. There are lots of opportunities to experience the culture.”

The henna artist will be available at the Embassy of Bahrain, a veteran Around the World participant, which this year will also be showcasing a Bahraini film that was the first to be produced in the Persian Gulf region, alongside other movies and traditional Bahraini dishes and coffee.

“We will open embassy doors to Washington-area residents and visitors to experience our authentic culture and heritage and learn more about Bahrain, which is rich in heritage and culture and was identified as a World Heritage Site,” said Aysha Murad, the embassy’s cultural counselor. “I hope that you walk away with a better understanding of a country that may be far away geographically, but not in principle or ideology.” 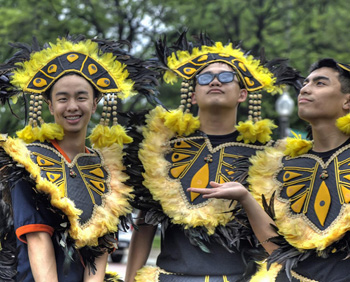 The European Union and the embassies of the 27 EU member countries pioneered the concept of opening their doors to residents, holding annual open houses since 2007.

“The theme of the 2010 edition is ‘green Europe: good for the economy and the environment,’” said Jorge Sobredo and Jimena Paz, the Embassy of Spain’s cultural counselor and cultural affairs officer, respectively. “During the day, each embassy will showcase the country’s own experience with tackling climate change, growing a clean-energy economy of the future, and making the EU the world’s leader in reducing greenhouse gas emissions by at least 20 percent by 2020.”

The EU Open House, which runs from 10 a.m. to 4 p.m., also kicks off Europe Week, a citywide celebration with concerts, exhibitions, film screenings, performances and other activities at various venues around town. (For more information, visit www.europe-in-dc.com.)

Another key highlight of Passport DC is the fourth annual International Children’s Festival at the Meridian International Center, where dozens of embassies will set up displays, crafts and other activities to highlight their nations.

“Children of all ages travel the world in a day by visiting interactive embassy-sponsored booths and watching multicultural dance performances,” said Katie Appel, the center’s program manager for youth and exchanges. “The goal of the International Children’s Festival is to offer the participants an opportunity to learn about the world by awakening their five senses through culture and the arts, while also celebrating the diversity of the people and cultures found within the D.C. community.”

Activities include constructing Japanese origami and tasting French crêpes. The festival will close with a screening of a children’s film from Burkina Faso as part of Kids World Cinema.

Passport DC winds down with the Fiesta Asia Street Fair on May 22, from 10 a.m. to 7 p.m. on Pennsylvania Avenue, NW, between 3rd and 6th Streets. The fair includes four performance stages, food vendors, arts and crafts, cooking demonstrations and an Asian beer garden. New activities this year include Middle Eastern belly dancing and a Bollywood flash mob dance with 300 people.

“We have martial arts from all sorts, from all the different Asian regions,” said Wuiping Yap, executive director and founder of the Asia Heritage Foundation. “My personal favorite is two 5-year-olds that are knife-wielding. They’re really good and I’m intimidated by them.” 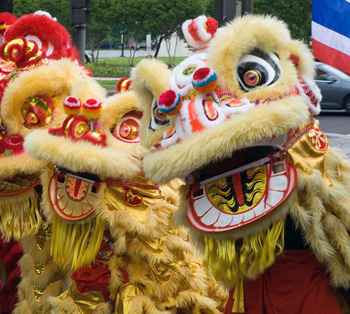 For children and adults alike, Passport DC has become a popular annual tradition in Washington, regularly attracting tens of thousands of visitors and providing a unique showcase for the area’s myriad cultural offerings. As Harper put it, “You can really become a citizen of the world right here in D.C. without ever leaving it.”

For additional coverage of Passport DC in previous years, see “Opening Doors, Again” in the Marc h 2009 issue and “Beyond the Mall” in the April 2008 issue.