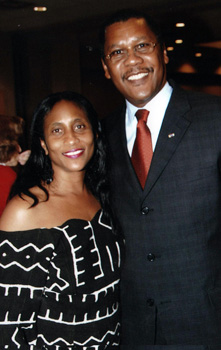 Dawn Cooper Barnes is no stranger to personal hardship or the harsh realities of a war-torn homeland — though she has turned obstacles into opportunity and celebrates life with an energy and resilience that would surprise many people.

It’s equally surprising how she even has the time for any of it. She is the wife of Liberian Ambassador M. Nathaniel Barnes and the mother of six children — including a 19-year-old autistic son and a 7-year-old daughter adopted from a Liberian orphanage. With an educational background in theater and film, she holds a doctorate from the University of Maryland and has been a television and film producer, as well as a professional dancer, choreographer and performing arts director.

Dawn Cooper Barnes and her husband, Liberian Ambassador Nathaniel Barnes, grew up in the same small community in Monrovia, leaving Liberia after the 1980 coup d’état to live in Tennessee, later moving to New Jersey and Maryland, where Dawn taught at Howard Community College and founded the Aurora Dance Company.

She is also president of the newly reorganized Spouses of African Ambassadors Association and a major supporter of the Autism Community of Africa — and she hopes to start a similar organization to help autistic children and their families in Liberia.

Meanwhile, as the ambassador’s wife, she relishes the opportunity to promote the unique bond her African nation shares with the United States.

“Most people don’t know that Liberia is part of American history,” she began. “America’s founding fathers are ours too. Thomas Jefferson, Francis Scott Key and George Washington’s nephew, Bushrod Washington, were all members of the American Colonization Society, whose purpose in the early 1820s was to find a place for free blacks, away from American soil,” she explained of the West African nation, where thousands of freed slaves from the United States resettled, culminating in the Republic of Liberia’s declaration of independence on July 26, 1847.

Despite the promise of a “land of the free,” the presence of these Americo-Liberian settlers, as they were often called, was not free of controversy.

“It’s not surprising that our country had trouble from the beginning,” Dawn said. “There was a big cultural clash between the indigenous people from 16 different tribes who were the obvious majority and the settlers, who arrived with Western thoughts, Christian religion and higher literacy. Immediately, the settlers began to dominate, which led to mutual mistrust and misunderstanding between the two distinct groups.”

After decades of political tensions whereby the Americo-Liberian elite monopolized political power and restricted the voting rights of the indigenous population, full-scale violence finally broke out. There was a bloody coup d’état in 1980, followed by a devastating civil war in 1989 that lasted for seven years and took the lives of more than 200,000 people. Life didn’t improve much for Liberians under the subsequent regime of President Charles Taylor until international pressure removed him from power in 2003.

Dawn is candid about Liberia’s troubles but wants everyone to know that despite more than 20 years of bloodshed and civil unrest, her homeland has also had some very proud moments in history. The first independent republic in colonial Africa, Liberia is now governed by Ellen Johnson-Sirleaf, a widely respected economist and Africa’s first democratically elected female head of state. Dawn noted that Liberia, an original member of the United Nations, also cast the deciding vote to bring the state of Israel into existence and was an early opponent of apartheid in South Africa.

Today, the country is making tangible strides in reducing poverty and rebuilding from decades of conflict.

Dawn’s life with her family has been intimately shaped by the twists and turns of Liberia’s tumultuous journey over the years. 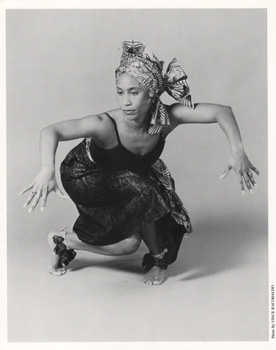 “My husband and I grew up in Liberia but came to America to go to college and then returned home to be married and raise a family. Nat and I always knew each other. We grew up in the same small community in our capital city of Monrovia. His mother taught at my elementary school and my father was their family doctor,” Dawn recalled. “We first left Liberia as a family after the 1980 coup to live in Nashville, Tennessee, where my husband became a Nortel executive.”

While in Maryland, she gave birth to their fifth child, Zwannah, who was later diagnosed with autism. “At first, I prayed that he would overcome this developmental disorder. Then I realized that there is nothing wrong with Zwannah, but with us. We are fortunate in having him in our family. We are all more sensitive because of him; my other children are much more caring with others because of his disabilities. When we go on family vacations, we assign duties and take turns caring for him on different days. Our family is much more closely bonded because of Zwannah,” Dawn explained.

“In a lot of cultures, even here, autistic children are locked away because they lack social skills — they are ‘unacceptable’ to society and sometimes, even their own families,” she continued. “But instead, the more an autistic child is part of society, the better functioning they will become. They may be able to live in group homes and hold down jobs as long as they have some structure.”

Dawn spoke of her personal experience raising an autistic child at a fundraiser last year to support the construction of the first autistic center in Côte d’Ivoire, describing at length the frustrations she encountered both in America and Africa. In the end though, Dawn credits both cultures for helping her son, whom she said “has had the best of both the Western world and the more traditional African society. Even while living in America, Zwannah was nurtured within an extended family … no one bore the burden alone.”

She added: “There are many lessons that families worldwide have learned about living with autism and these lessons must be shared globally. There are even lessons that people in Africa may be able to share with the most technologically advanced countries in the world. However, the right mechanisms must be in place to fully take advantage of the exchange of information.

“When we go home again, I want to create the kind of support system we have here for autistic children and their families with school programs and teachers who understand the disorder,” Dawn told The Washington Diplomat. “Right now, we have nothing in Liberia like we have here.”

Dawn found that out when the family moved back to Liberia when Zwannah was less than 10 years old. At the time, from 1999 to 2002, her husband was the country’s finance minister until his differences with then-President Taylor forced him to step down. Once again, Liberia had become a bloody battleground as the Taylor regime fought anti-government rebels, and once again Dawn retreated to the United States for her children’s safety.

Finally in 2003, Taylor was forced into exile and an interim government took charge, and two years later, as the presidential election approached, Nathaniel Barnes decided to enter politics. He founded the new Liberia Destiny Party and agreed to be his party’s presidential candidate in the October 2005 race. Although he did not win, he was the first candidate to throw his support behind Ellen Johnson-Sirleaf, Liberia’s current leader. In May 2006, she appointed Barnes to represent Liberia at the United Nations in New York and, two years later, appointed him ambassador in Washington.

Today, because their oldest four children live in or near Washington, it is easy for the whole family to share major holidays and vacations. Thirty-five-year-old Nyema is with Allstate Insurance in Baltimore, Md.; 28-year-old Julien is a hip-hop artist and producer; 25-year-old Henry is working toward his law degree at George Mason University in Virginia; 23-year-old Courtney is studying mass communications at Howard University; and their youngest, Sadayah, is a first-grader at nearby John Eaton Elementary School in D.C.

As the ambassador’s wife, Dawn uses her profile to promote African designers and highlight her country’s three-piece traditional dress and head wrap made of colorful cotton batik, silk or wool. “I had expert African tailors in Harlem when we were in New York, but I just found someone wonderful here in Takoma Park,” she noted. “My secret passion though is pocketbooks. I have over 100!” 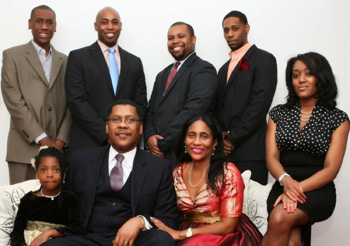 Dawn Cooper Barnes and her husband Nathaniel Barnes are pictured with their six children: back row from left, 19-year-old Zwannah, 35-year-old Nyema, 25-year-old Henry, 28-year-old Julien and 23-year-old Courtney, as well as their youngest, 7-year-old Sadayah seated beside them.

And although she enjoys the comforts of American life, Dawn hasn’t forgotten about the needs of her homeland.

“I dream of a Liberia that has a secure peace, infrastructure for health care and education, and successful business development, especially for tourism. We have such natural beauty with the largest intact rainforest, yet we are one of the poorest countries in the world. We need educational partnerships and foreign investors from the private sector to come in and create jobs for the local people,” she said.

Dawn was particularly struck by the award-winning 2008 documentary “Pray the Devil Back to Hell,” which depicts the Women of Liberia Mass Action for Peace movement and how the group’s nonviolent protests became a powerful catalyst for political change.

“It tells the story of Liberian women — Muslim and Christian, settler and indigenous, rich and poor — coming together to end the war in 2003,” Dawn said. “One day, I hope to produce an epic-scale film myself about Liberia. Like ‘Roots,’ it would be a story of a people overcoming slavery and triumphing over many years of mistrust to become the true beacon of hope that Liberia, land of the free, was designed to be.”