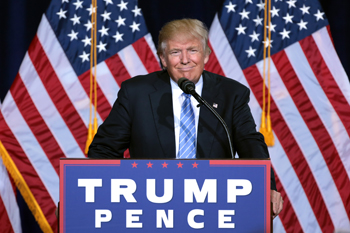 Republican presidential candidate Donald Trump catapulted to the national political stage last year on a platform driven by one major foreign policy issue: immigration. Since then, he has kept that topic at the forefront of his campaign, although his specific policies remain broadly sketched nativist calls shaped around his claim that he alone will “Make America Great Again.”

Republican presidential candidate Donald Trump talks about immigration during a campaign rally in Phoenix in August.

Trump has called for a wall to be built along the border with Mexico, paid for by Mexico — something many of America’s neighbors to the south find offensive if not outright ridiculous. The real estate mogul has also said he would deport the 11 million undocumented immigrants living in the United States. Trump has long put Mexican immigrants at the center of his campaign — just look back to his speech announcing his candidacy in June 2015, built firmly on his hardline immigration policies.

Trump’s bid to make America “great” again was also echoed in his call that the wall, too, would be “great.”

“I will build a great, great wall on our southern border. And I will have Mexico pay for that wall,” he said in June 2015.

While a number of political commentators assumed Trump would possibly soften his immigration stance as the election neared to appeal to a wider set of voters, he instead maintained his stringent line in a speech in Arizona on Aug. 31.

“Right now, however, we’re in the middle of a jobs crisis, a border crisis and a terrorism crisis like never before. All energies of the federal government and the legislative process must now be focused on immigration security. That is the only conversation we should be having at this time, immigration security. Cut it off,” Trump said in Phoenix, shortly after meeting with Mexican President Enrique Peña Nieto, who was widely derided for hosting the visit.

Trump also seemingly tripled down on his deportation plan, telling those attending the Arizona rally that “we will ensure that other countries take their people back when we order them deported.” 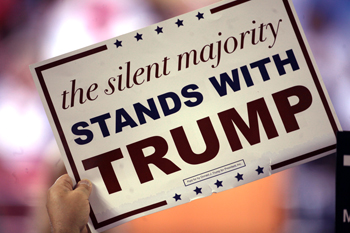 Supporters wave signs for Donald Trump at a Veterans Memorial Coliseum rally on the Arizona State Fairgrounds in Phoenix.

“There are at least 23 countries that refuse to take their people back after they have been ordered to leave the United States, including large numbers of violent criminals. They won’t take ’em back. So we say, OK, we’ll keep ’em,” Trump said. “Not going to happen with me, folks, not going to happen.”

Trump’s populist rhetoric extends to other nations, as well. He famously called for temporarily barring all Muslims from the United States before somewhat softening that position. He has since argued that people from nations with “a history of exporting terrorism” should be vetted using an ideological screening test reminiscent of the Cold War, though he doesn’t define what that process would involve. Trump would also suspend the U.S. program to accept Syrian refugees.

Trump’s barebones foreign policy “doctrine” is predicated on putting the interests of America first, while forcing allies to shoulder more of the burden. Some analysts have labeled the billionaire businessman-turned-reality TV star an isolationist. Trump has decried Bush-era interventions and Obama-era nation-building efforts, for example, and vowed not to “lecture” authoritarian nations on their behavior before cleaning up the “mess” at home. But Trump’s views don’t neatly fit the isolationist mold. Last month, he announced that he would boost defense spending and expand the military if elected. Indeed, his policy prescriptions often defy easy categorization or convention, for that matter; Trump once suggested he would “take out” the family members of terrorists.

But foreigners — and their presence on U.S. soil — are the hallmark of Trump’s foreign policy platform. His attacks against immigrants have resonated with legions of disenchanted, blue-collar, white male voters, especially in rural areas, while alienating growing minority populations in urban centers.

Trump’s unapologetic lack of information on how he would implement any of his immigration proposals has also confounded experts, with his campaign surrogates often delivering conflicting accounts of this signature issue. Take former New York Mayor Rudy Giuliani, who said in early September after Trump’s speech outlining a 10-point plan concerning immigration that Trump no longer wants mass deportations and that the candidate’s policies leave “a very big opening for what will happen with the people who remain here in the United States after the criminals are removed and the border is secure.” (Prioritizing the deportation of criminals and securing the border have also been key components in Obama’s immigration strategy.)

Meanwhile, GOP vice presidential nominee Mike Pence has argued that “Trump’s been completely consistent” on immigration, despite questions swirling around whether Trump means throwing out all 11 million undocumented immigrants or just some of them. 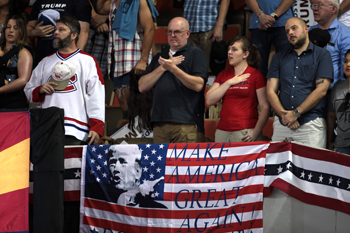 Supporters of Donald Trump hold a flag bearing his campaign slogan, “Make America Great Again,” at a rally in Arizona in June.

Trump has long been short on policy details — a point on which he prides himself, as he articulated to Time magazine in June this year by mocking Democratic rival Hillary Clinton for churning out numerous proposals.

“She’s got people that sit in cubicles writing policy all day. Nothing’s ever going to happen. It’s just a waste of paper,” he said.

On the latter, Trump’s position vaguely states that “the most important component of our China policy is leadership and strength at the negotiating table” and puts the main goal of the proposal as “fighting for American businesses and workers.” A Trump presidency would immediately declare China a currency manipulator, force the country to uphold intellectual property laws and reveal its export subsidy practices, as well as boost America’s military presence in the region to help “strengthen our negotiating position.” Trump has also threatened to slap a 45 percent tariff on Chinese imports, which economists say would spark a trade war and possible recession.

Meanwhile, Trump’s immigration proposal features “three core principles” that include building a wall across the southern border and having Mexico shell out the money for it; enforcing laws by tripling the number of Immigration and Customs Enforcement officers, ending birthright citizenship and enhancing penalties for overstaying a visa, among others; and requiring businesses to hire domestically before looking elsewhere. In addition, he has slammed NAFTA as the “worst trade deal in history” and vowed to renegotiate the pact or leave it all together.

Beyond Mexico, Trump has made other traditional U.S. allies nervous. The Republican candidate rattled officials in South Korea and Japan when he suggested removing thousands of American troops and the nuclear umbrella that the U.S. has maintained in both countries for decades. He has also pledged to pull out of the Trans-Pacific Partnership trade deal and said he’d consider halting oil purchases from Saudi Arabia and other Arab allies unless they come up with more resources to fight the Islamic State. “We will not be ripped off anymore,” he said in a March New York Times interview.

On the European front, Trump has questioned the relevance of the North Atlantic Treaty Organization and set conditions for defending NATO allies against attacks. He told the New York Times, for instance, that he would only come to the assistance of the Baltic States if they had “fulfilled their obligations to us.”

He has also thrust Russia, and President Vladimir Putin, to the forefront of his foreign policy agenda. Trump said he predicted he would have a great relationship with Putin, a sharp contrast to many in the conservative establishment who have criticized the Russian president on a number of issues such as fomenting unrest in Ukraine and aiding the regime of Bashar al-Assad in Syria. 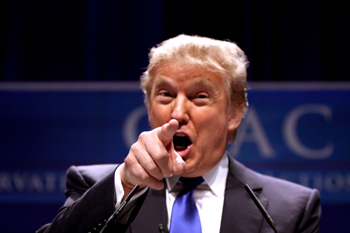 Democrats, meanwhile, have seized on Trump’s praise of Putin to paint the candidate as cozy with America’s geopolitical foe, while giving its friends in the region the cold shoulder. Among other controversies, Trump joked that Putin should hack and release emails from Clinton’s server despite widespread concern that Moscow was interfering in the U.S. election; he was seemingly unaware that Putin had annexed Crimea; and Trump’s former campaign manager stands accused of accepting millions of dollars from the pro-Russia party in Ukraine.

Despite condemnation from both the left and right, Trump continues to emphasize his personal approval of Putin, saying in September 2015 that “in terms of leadership, he is getting an ‘A.’” He has also praised former dictators ranging from Iraq’s Saddam Hussein to North Korea’s Kim Jong-un for being strong leaders.

On the issue of the Islamic State (also known as ISIS), Trump says he has a plan for the United States to destroy the group — which he described as a bigger danger than Syria’s Assad — and “win fast.”

“To protect us from terrorism, we need to focus on three things. We must have the best, absolutely the best, gathering of intelligence anywhere in the world. We must abandon the failed policy of nation-building and regime change that Hillary Clinton pushed in Iraq, Libya, Egypt and Syria. Instead, we must work with all of our allies who share our goal of destroying ISIS and stamping out Islamic terrorism and doing it now and doing it quickly. We are going to win, we’re going to win fast,” he said at the Republican National Convention this summer.

Much like many of his other policies, however, Trump’s declarations on defeating the Islamic State were big on bombast and short on specifics. Yet with just weeks left in the campaign, the candidate seems unlikely to shift away from his formula of dramatic but questionably deliverable statements in favor of in-depth foreign policy plans.