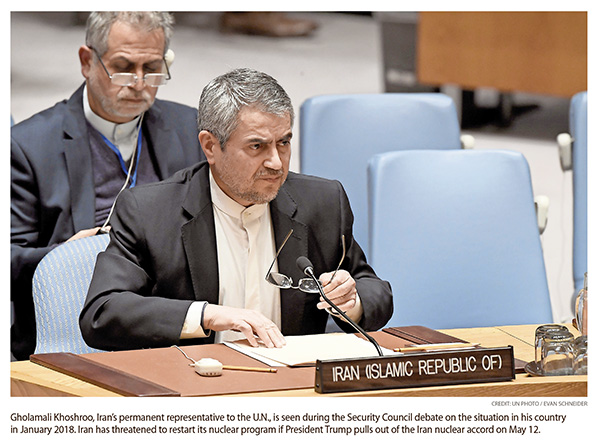 President Trump must decide by May 12 whether to stay in the Iran nuclear agreement or withdraw from it, and his choice of John Bolton as national security adviser and Mike Pompeo as secretary of state increase the likelihood that he will abandon the landmark accord.

Then the question becomes: What happens next? Will Iran automatically restart its nuclear program, potentially leading to a regional arms race? Will the European Union work with Iran to salvage the deal in defiance of Washington? Or can the bloc come up with a successor agreement that will satisfy the White House? Will Trump be slow to reinstate sanctions on Tehran, giving diplomacy more time? Will Trump’s move to renege on America’s commitments on Iran endanger his credibility ahead of nuclear talks with North Korea? Or will Trump simply surprise everyone again and stick to the deal for now?

The nuclear agreement requires the U.S. president to recertify Iran’s compliance every 120 days and to continue waiving certain economic sanctions against Iran. Trump has accused Iran of violating the “spirit” of the agreement, but Iran, the International Atomic Energy Agency and arms control experts say Iran has lived up to its commitments.

Officially known as the Joint Comprehensive Plan of Action, or JCPOA, the Iran nuclear deal was negotiated by the Obama administration along with Britain, France, Germany, Russia and China (the P5+1). It took effect in 2015 and relieved some economic sanctions against Iran in exchange for it agreeing to suspend its nuclear weapons program activities.

Specifically, Iran agreed to allow international inspections of its nuclear sites, relinquish 98 percent of its uranium stockpile and mothball most of its centrifuges. Terms of the deal begin to expire within 10 and 15 years of its signing; after that, Iran must abide by restrictions under the Nuclear Non-Proliferation Treaty. In return, Iran resumed selling its oil on the global market, had tens of billions of dollars in assets unfrozen and began inking business deals with international companies. 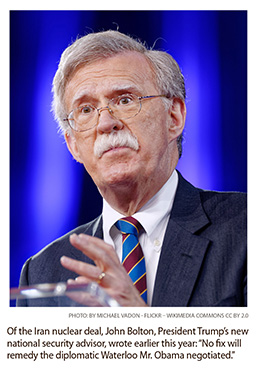 Before the appointments of Bolton and Pompeo, State Department and National Security Council officials were working to keep the agreement alive, in part by negotiating with European allies on side agreements with the parts of it that Trump singled out, said Matthew Kroenig, an arms control expert at the Atlantic Council.

There are three aspects of the agreement that Trump has complained about:

“The strategy to renegotiate it, as I understood it, was to first get the EU3 [Britain, France and Germany] and the United States to agree to release a statement some time between now and May 12 because May 12 is when the president’s going to have to recertify sanctions relief for Iran or not,” Kroenig said.

He said the next step “would be to try to get China and Russia on board with these same sentiments.” Russia has an economic interest in keeping the agreement in place, because it sells various nuclear power-related products and services to Iran. Beijing, which is also Iran’s economic partner, may be less inclined to go along with Trump’s demands following the $150 billion in tariffs he has threatened to slap on China.

If all six countries spoke with the same voice, that might provide enough leverage to bring Iran to the negotiating table, Kroenig said. Iran has so far refused to renegotiate any part of the agreement.

“My understanding is that was the strategy under [former National Security Advisor H.R.] McMaster for renegotiating,” Kroenig said. “Now, with Bolton coming in, he has said this is a bad deal and we should pull out altogether. So, maybe on May 12, the president will just say, ‘Nope, not good enough, bad deal, I’m reinstating U.S. sanctions’ — which would be a very different approach.”

McMaster and Defense Secretary Jim Mattis argued that however flawed the agreement was, reneging on it would isolate the U.S., not Iran, and create a transatlantic rift. Experts say that torpedoing the agreement may also make it that much harder to tackle non-nuclear-related issues, such Iran’s ballistic missile program and its destabilizing activities in the region, such as its meddling in Syria and Yemen. Those concerns were explicitly left out of the initial deal because the nuclear threat was considered more dangerous at the time. But the administration argues that by doing so, the nuclear pact fails to take a broad-based view of Iran’s behavior. 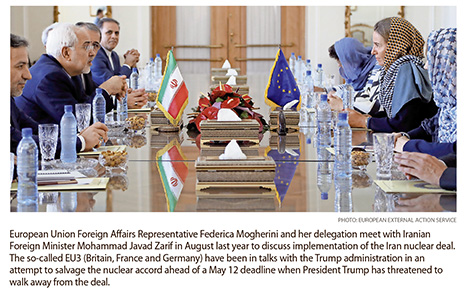 While Europeans agree that Iran’s behavior is a problem, they worry that Trump will back out of the nuclear deal no matter what concessions they offer, given the president’s widely publicized hatred of the agreement. So for weeks, the British, French and Germans have been trying to walk a fine line between appeasing the administration without alienating Iran and scuttling the deal altogether.

Europeans are reportedly amenable to two of Trump’s proposed fixes: sanctions on Iran’s long-range missile program and expanded inspections (even though Tehran considers unfettered access to its military sites a nonstarter). Ditching sunset clauses, however, is a tougher sell because that would essentially entail renegotiating the deal, which took years of delicate diplomacy to hammer out. Another problem is convincing other EU member states such as Italy and Spain to go along with sanctions targeting Iran’s ballistic missiles because it could mean sacrificing lucrative business contracts with Iran.

Senior State Department official Brian Hook and his European counterparts “have been trying to develop a package of measures to placate the U.S.,” said James Acton, co-director of the Nuclear Policy Program at the Carnegie Endowment for International Peace. “And as I understand it, what they’re negotiating is getting closer and closer to the European position, not to the U.S. position.”

An issue for Europe is whether a U.S. withdrawal from the Iran agreement will lead to a re-imposition of so-called secondary sanctions against European businesses. Secondary sanctions would prohibit companies that do businesses in Iran from doing business in the United States. Those sanctions were in place until 2015, when the agreement took effect, and “were really helpful,” Kroenig said. “We really put [the Europeans] in a tough spot. We forced them to choose — do you want to buy cheap Iranian oil and gas, or would you rather have access to the U.S. market and the U.S. dollar and the U.S. financial system? So, for most banks and for most corporations, there was no choice there.”

He said European governments were disinclined to align themselves with Trump’s threatening posture until bankers and corporate leaders told them that “we can’t afford to lose the U.S. market. Please join the U.S. sanctions.”

Even if Trump withdraws from the JCPOA, he could offer Europeans a reprieve by opting to phase in sanctions, hitting Iranian entities with unilateral penalties while waiving secondary sanctions until a compromise can be reached.

Re-imposing direct sanctions against Iran would have a milder impact on that country, because most of the U.S. sanctions that were in place when the nuclear agreement was signed stayed in place after it took effect.

“The main thing the JCPOA gave Iran is the ability to buy [non-military] aircraft off the U.S.,” Acton said. “From Iran’s perspective, the single-most important piece of sanctions relief they got under the JCPOA was the lifting of secondary sanctions. The lifting of primary U.S. sanctions against Iran, with the exception of aircraft, wasn’t such a big deal.” 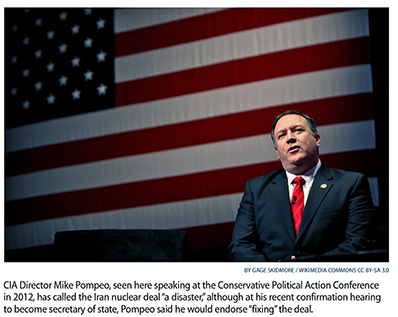 But even the lifting of secondary sanctions did not give many Iranians the economic boost they were hoping for. This gets to the heart of Tehran’s main complaint about the nuclear agreement — that fears of running afoul of U.S. law have prevented European banks and companies from investing in Iran despite the lifting of sanctions.

Even though Tehran has threatened to restart its nuclear program if the U.S. kills the deal, it may be motivated to work with the EU3 and Russia and China to preserve the nuclear accord given how much the Iranian economy needs foreign investment. Iran may also fear a U.S. military strike, particularly with hawks like Bolton and Pompeo now in power.

But some experts fear that if the U.S. abandons the pact, it will empower hardliners in the regime, including Iran’s Revolutionary Guard Corps, at the expense of moderates like President Hassan Rouhani, who has struggled to show ordinary Iranians the tangible results of sanctions relief (also see “Hardliners Fight to Unseat Iran’s Moderate President in Critical Election” in the May 2017 issue). Hardliners who fought against the nuclear agreement from the start may now have an excuse to walk away from it, or Rouhani may be forced to restart the nuclear program just to save face and fend off political challenges.

“Iran will not violate the nuclear deal, but if the United States withdraws from the deal, they will surely regret it,” Rouhani vowed last month as Tehran marked National Nuclear Technology Day. “Our response will be stronger than what they imagine and they would see that within a week.”

The United States will “absolutely not” be better off if Trump withdraws from the Iran deal, said Jarrett Blanc, a senior fellow at the Carnegie Endowment for International Peace. If that happens, “then you run the risk that Iran returns to full-scale [uranium] enrichment, that they don’t comply with all these transparency measures, that you return to this position of ambiguity throughout the region about whether or not Iran is moving toward a nuclear weapon, which is bad and dangerous for us, and at the same time, driving a wedge between us and our closest allies.”

Blanc added that “there are a lot of decisions the administration would have to make in terms of what specifically they mean by killing the deal. As far as I know, they haven’t really gone through that planning process at this point.”

The appointments of Bolton and Pompeo may mean that they never do.