Home The Washington Diplomat May 2018 Whether on Trump, China or ‘Western Delusions,’ Singapore’s Bilahari Kausikan Tells It Like It Is 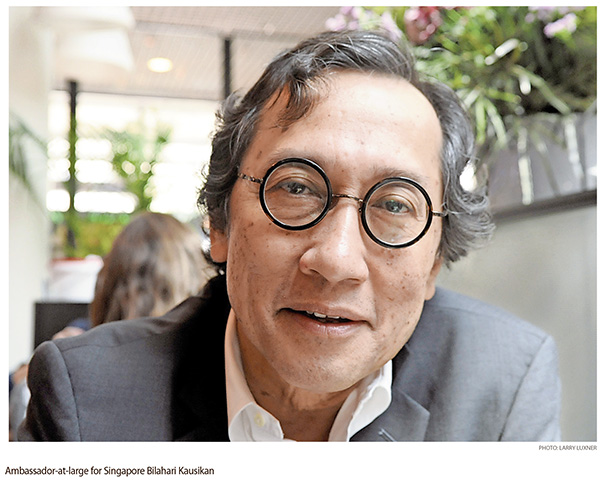 With 5.7 million people crammed into an area only four times the size of the District of Columbia, Singapore — which built its wealth on global trade, shipping, finance and openness to investment by foreign multinationals — is the second-most densely populated nation on Earth, surpassed only by the European microstate of Monaco.

Yet when it comes to quality of life, squeaky clean Singapore consistently ranks at the top of many global lists. Sprawling Changi Airport is consistently voted the world’s best airport, Singapore Airlines among the world’s best airlines, and Singapore itself among the world’s easiest places to do business. It also regularly outperforms other countries in areas such as life expectancy, education, health care, safety and per-capita income. Architecturally speaking, its skyline is the most dramatic in Asia.

On the other hand, Singapore has a reputation for being a nanny state where free speech is suppressed, political opposition is restricted and people who commit petty offenses like peddling pirated DVDs, chewing gum, scrawling graffiti in public places or even jaywalking are punished with jail time. Drug trafficking carries a mandatory death sentence.

This year, Singapore occupies the rotating chairmanship of the 10-member Association of Southeast Asian Nations (ASEAN).

But diplomacy is nothing new in Bilahari’s family. His father was the country’s first ambassador to what was then the Soviet Union, and Bilahari himself is a former envoy to Russia and Singapore’s ex-permanent representative to the United Nations.

The Straits Times, Singapore’s best-known newspaper, recently called Bilahari “the undiplomatic diplomat” who tells it like it is, regardless of the consequences.

Last July, when a reporter for that newspaper asked Bilahari about his reputation for chewing people up and spitting them out, he laughed. “Only on Tuesday, Thursday and Saturday,” he said. “On Monday, Wednesday and Friday I merely suck their blood.”

Bilahari, 63, is currently chairman of the Middle East Institute, an autonomous entity within the National University of Singapore. He’s also written a book called “Singapore Is Not An Island.” The Washington Diplomat caught up with Bilahari at the Grand Hyatt Singapore, just as he was preparing for a visit to Israel. Here are excerpts from our one-hour meeting: 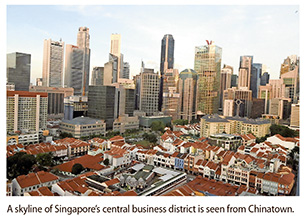 The Washington Diplomat: How do you view your role as a diplomat?

Bilahari Kausikan: There is a misunderstanding of diplomacy. It is not about making yourself agreeable to everybody; it’s about pursuing your country’s interests.

TWD: How would you categorize Singapore’s relationship with the United States?

BK: Both from a strategic and an economic sense, it is one of our two most important relationships, and probably still ahead of China. From the security deterrence point of view, there is no substitute for the United States. China is going to be an important economic partner, but the U.S. is never going to be an insignificant trading partner, and the U.S. is the offshore balancer in this region, for which there is no substitute.

I keep telling people, don’t judge the United States by what happens in Washington, D.C., because the most important things happen in research labs, universities, corporations and in the 50 states. If you only judge the U.S. by what happens in Washington and what you read in The New York Times, you will conclude, with justification, that the U.S. is in a state of terminal decline. But I lived there for a long time, and of all the major advanced countries, you have a young population that is constantly renewed, because you still attract immigrants.

TWD: What do you think, in general, of the Trump administration’s foreign policy?

BK: If you look calmly at not what Mr. Trump says or tweets, but what his administration has done in the security and foreign policy area, it’s actually not bad. In some ways it’s an improvement over the second term of the Obama administration.

When Obama drew a red line in Syria over chemical weapons and did not enforce it, this really damaged American credibility. So when Trump launched missiles at Syria while having dinner with [Chinese President] Xi Jinping, it did a lot to undo the damage that Obama caused and restore the credibility of American power, which has repercussions for all kinds of things. 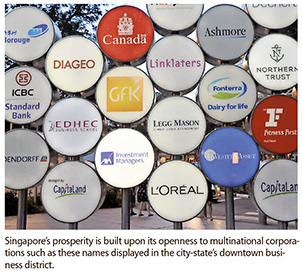 TWD: Do you see a U.S. trade war coming with China?

BK: We should not underestimate Mr. Trump. What he said he would do, he’s doing. Some of the things he said during the campaign are just campaign rhetoric, but this one is very important to his base — even though his base is wrong. If they lost their jobs, it wasn’t because of China, but because of technological change. Some of those jobs are not coming back. It’s a hard fact.

TWD: But how will this affect Singapore, whose economy is totally dependent on trade?

BK: The whole world can be screwed, to put it bluntly. I think the risk is very, very high, because China has to respond. But I think the Chinese will try to be reasonable. Some of the things [Trump has] accused China of are not wrong — for example the theft of intellectual property. If he had gone about it in a more calibrated way, I think he would have gotten international support to put China on a level playing field. But we are not the main target. Mr. Trump knows that the U.S. has a trade surplus with Singapore.

TWD: Six nations have competing territorial claims in the South China Sea. How might this issue be resolved?

BK: Singapore has no claims in the South China Sea, but no claims doesn’t mean no interest. Our interest is to have competing claims solved peacefully rather than by force of arms. But I don’t think you can resolve any of these claims. It’s impossible; it’s just too complicated. I’ve learned one thing in my career: There are some problems that have no solutions.

TWD: This year, Singapore occupies the rotating presidency of ASEAN. What exactly is ASEAN’s role in the region, and has it been a success since its establishment in 1967?

BK: When we formed ASEAN in 1967, we were five countries. Now there are 10. But in 1967, Indonesia had just stopped fighting an undeclared war against Malaysia, and we had just been expelled from Malaysia. Indonesia was in chaos. The Philippines claimed a huge chunk of Malaysia, and all these countries faced externally supported communist insurgencies. So ASEAN was formed to manage relations between countries that were not intrinsically friendly to each other. That is still its essential purpose: keeping the peace in Southeast Asia. And there’s been no war in Southeast Asia for 51 years. It’s a very diverse region. Where we can agree, we agree. Where we cannot agree, we set this issue aside. It’s not like the EU. We have no delusions about having a common foreign policy. It’s not possible. 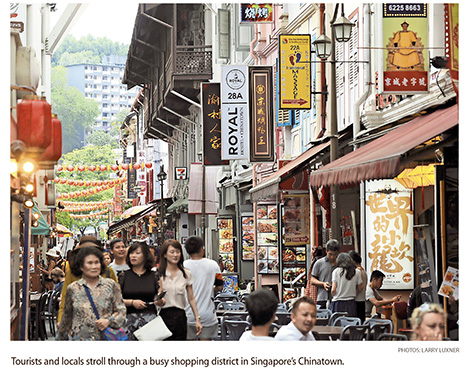 As chairman, we’re trying to start various initiatives using digital technology to enable better integration, such as smart cities and harmonization of rules. One cannot finish these initiatives in one year, but they’ll carry on. But the chairman’s role is a limited one, because ASEAN works by consensus, so you can’t do more than what the members are willing to do.

TWD: Do you consider Singapore to be a police state?

BK: This is a stupid impression by liberal Westerners talking through their ass. It is one of those persistent Western delusions that there’s only one form of democracy. Western liberal democracy is, historically, one variant of democracy. When was there a full franchise in the United States? Until quite recently, democracy was a white, male, landowning affair. It brought in women and colored people quite late. That said, there’s considerably more room now [in Singapore] than in the late 1970s.

TWD: As someone who’s been to North Korea six times during your diplomatic career, what do you see coming from the proposed meeting between Trump and Kim Jong-un?

BK: Mr. Trump, from the beginning, went from a failed policy of denuclearization to a policy of dealing with North Korea by deterrence. I don’t think North Korea can be stopped from acquiring the capabilities it already substantially has. For the North Koreans, it’s an existential issue. When Mr. Trump threatens fire and fury on North Korea, it’s not the way American presidents normally talk, but that is the essential logic of deterrence. Trump is much better than his predecessor, who did nothing for eight years and called it a policy of strategic patience. 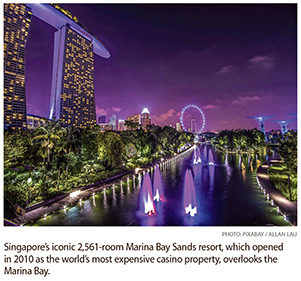 TWD: How does Singapore balance its relations with Israel and the Arab world?

BK: On that front, Israel and Singapore understand each other quite well. In things that do not hurt Israel, we’ll vote with the Palestinians, because we have a Muslim population and Muslim neighbors. But we will vote against anything that threatens Israel’s right to exist or equates Zionism with racism or suggests that Israel has committed war crimes.

TWD: How serious is the threat of a terrorist attack in Singapore?

BK: There will be a terrorist attack in Singapore sooner or later. Fundamentally, Islam came to Southeast Asia by traders, not by the sword. But there’s a phenomenon which we have noticed over the last 30 years: the Arabization of Southeast Asian Islam, which means much more exclusive versions of Islam. It’s not that one day everybody became more pious. But 30 years ago, it was very rare to see a Muslim woman covering her head. That is an Arab practice, not a Malay practice. But now it’s common, even in Singapore.

We don’t allow any Muslim organization in Singapore to take foreign money, because we don’t want foreign influence. For example, there is one central authority that writes the Friday sermon for all Muslims. We also ban some Christian preachers from coming here, too. Radicalization happens anyway, but why exacerbate the problem?