In “Lebanon,” Israeli writer-director Samuel Maoz offers a singularly unique viewpoint for a wartime movie. His script is based on his own tour of duty in the Israeli Armored Corps. Practically the entire film’s perspective is that of an Israeli soldier looking through a viewfinder within a tank during Israel’s invasion of Lebanon in June 1982. The cumulative cinematic effect results in a visceral experience quite unlike any that I can remember; however, (favorable) comparisons to the submarine environment of “Das Boot” are a given.

Alex Claude’s exquisite sound design plays a key role in establishing the sensory environment experienced by the solders — and the audience. As the soldier looks around, the viewfinder’s angle is jarringly adjusted, which is accompanied by eerie mechanical sound effects. The crisp noise of the crackling radio punctuates the tension boiling over within the claustrophobic space inside the tank, whose close confines establish the bunker mentality of the Israeli armed forces.

Samuel Maoz’s entire film “Lebanon” is seen through the perspective of an Israeli soldier looking through the viewfinder of a tank during Israel’s invasion of Lebanon in June 1982.

The four young men in the tank, drafted into the Israeli military, are scared out of their wits. The ostensible leader has nearly no effective authority and is constantly being challenged by his subordinates. The gunner is too gun-shy to shoot when his colleagues are being attacked. A veteran commanding officer plops down into the tank to dish out orders — with a grain of deserved disdain for these amateurs who are risking his mission and the lives of his soldiers with their unprofessionalism. He firmly repeats his orders for them to basically commit war crimes.

Australian director Bruce Beresford (“Paradise Road,” “Breaker Morant”) may be best known for his Hollywood work such as “Driving Miss Daisy,” but his latest release, “Mao’s Last Dancer,” is an entirely Australian production — albeit one with a definite Chinese angle and a location in Texas. The fascinating story is based on Jan Sardi’s adaptation of the autobiography of internationally known Li Cunxin, a principal artist for the Australian Ballet and principal dancer for the Houston Ballet. 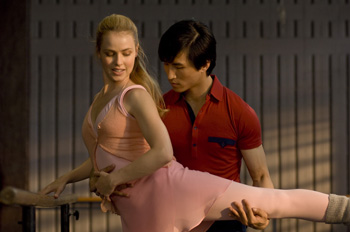 In 1972, during the Cultural Revolution, Communist Party cultural officials discovered 11-year-old Li in his impoverished village and sent him packing to become a special ballet student at Madame Mao’s Beijing Dance Academy, where art and politics are intrinsically intertwined. In 1981, as a naïve cultural exchange student in Houston, Li (played as an adult by Chi Cao, a real-life ballet dancer who also trained at the Beijing Dance Academy) flourishes as a dancer under the tutelage of Ben Stevenson (Bruce Greenwood), the gay choreographer who is Li’s host. Li in turn is shocked by Ben’s extravagant shopping spree for clothes, perhaps spending more in a day than someone in Li’s village ever sees.

While in America, after the sticker shock passes, Li questions the communist teachings indoctrinated into him about the superiority of the Chinese political and social system over that of the West. Li also falls in love with Liz (Amanda Schull), a fellow dancer. He defects to the United States, which does not exactly please Chinese officials, who try to kidnap him to bring him home, causing an international scandal. Texas attorney Charles Foster (Kyle MacLachlan) then toils on Li’s behalf.

The ensemble cast all do a good job in their various roles of bringing their characters to life. Beresford’s steady turn at the helm effectively transforms Sardi’s sound script into a solid movie experience. “Mao’s Last Dancer” works as a multilayered, textured film that operates on a personal as well as social-political level.

(English and Mandarin with subtitles; 117 min.)

“Cairo Time” presents a familiar tale about the growing romantic prospects that develop between two sensitive, lonely strangers who meet in the exotic setting of a foreign city. From that perspective, U.S.-Canadian director Ruba Nadda’s movie pleasantly touches the viewer, recollecting fond moments of “Brief Encounter,” “Before Sunrise” and “Lost in Translation” — good news for advocates of those kinds of films. (Those who aren’t fans of the genre might wish the slight story of “Cairo Times” had some more meat behind it.)

In Cairo, Juliette Grant (Patricia Clarkson of “Vicky Cristina Barcelona,” who glows on screen as always), the idle middle-age wife of a U.N. worker, meets Tareq Khalifa (the charismatic Alexander Siddig of “Star Trek: Deep Space Nine” and “Syriana”), a handsome local who’s a retired police affair. As they carry out their unexpected, budding love affair, the city of Cairo itself plays a lush character on screen — seemingly offering its sights and smells to the audience.

(English and Arabic with subtitles; 90 min.)