Home The Washington Diplomat March 2010 League of Their Own 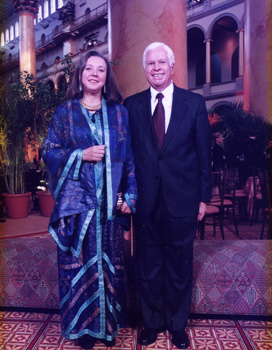 Hussein Hassouna, ambassador of the League of Arab States, and his wife Nevine Hassouna — both originally from Egypt — have represented the Arab League’s 22 member countries for five years at the United Nations and seven years in Washington.

With her wide smile and signature pageboy hairstyle, Nevine Hassouna and her husband, Hussein Hassouna, ambassador of the League of Arab States, have become fixtures in many diplomatic circles. After having represented the league’s 22 Arab nation members for five years at the United Nations and seven years here in Washington, the couple has also experienced the tumultuous roller-coaster ride of U.S.-Arab relations.

Things were definitely on an upswing when Hussein Hassouna — a distinguished career diplomat from Egypt and a member of the U.N. International Law Commission — was on his first posting in Washington as political counselor for the Egyptian Embassy in the late 1970s.

The Middle East peace process was finally moving forward, the Israelis and Egyptians were on the verge of a major peace accord, the relationship between Egypt and the United States was extremely positive, and the Hassounas were newlyweds.

“Everything was wonderful then,” Nevine said. “We were witnesses to history. We were here during the peace talks at Camp David and the signing of the peace treaty on the White House lawn.

“My husband was working around the clock and I seldom saw him. It was also the beginning of the King Tut exhibits in America, which brought so much excitement. But that was 32 years ago.” Nevine smiled and paused as her mood changed. “Now, things are very different.”

“On 9/11, we were here in Washington attending a U.S.-Arab relations conference, not in New York where Hussein represented the Arab League at the United Nations. He had been shuttling back and forth between the two cities before the league decided that they needed two ambassadors, one for each city. We were staying at the Mayflower Hotel where his conference was,” Nevine recalled. “Hussein was dressing when he first saw something on TV. He called for me to turn on the big TV and that’s when we saw it all happen … then, they announced that these terrorist acts were committed by Arabs. We felt shocked and saddened.

“The strange thing is that I wanted to go back to New York immediately because that was my home,” she added, vividly remembering that awful morning. “We traveled by train to Penn Station. Once we reached the streets of Manhattan, the saddest thing was seeing all those lampposts covered with notices about the missing — not one lamppost was empty.

“As president of New York’s Islamic Heritage Society and the wife of the Arab League ambassador to the United Nations, I felt terrible. We both did,” Nevine continued. “On behalf of the society, I wrote a letter to the New York Times which was published saying that we share the grief of the American people and that those terrorists do not represent all Muslims and Arabs.”

Since then, Nevine and Hussein have worked tirelessly to repair the tarnished Arab image created by 9/11 and the subsequent “war on terror.”

When asked what it’s been like to live in the United States after 9/11, she admitted, “It is probably easier for me than other Arabs and Muslims because I don’t look very Egyptian or Arab. But I strongly feel very Egyptian and Arab and I’m proud of it. Often people tell me, ‘You look just like one of us’ and I tell them that many Egyptians have a mixed heritage.”

Both natives of the ancient Egyptian city of Alexandria, Nevine attended English schools and graduated from the city’s Fine Arts University while her husband attended a French primary school, receiving his law degree from Cairo University and his doctorate in international law from the University of Cambridge. She was working as a graphic designer at Al-Ahram newspaper when she met the young Egyptian career diplomat “on the beach” in Alexandria. They were introduced by friends and married a year later, setting off for the United States.

After his four years in Washington, Hussein Hassouna was called to Paris to become minister counselor, serving as head of the Egyptian Press Bureau from 1983 to 1986. Then the Hassounas returned to Cairo, where he served as chief of staff to the foreign minister.

In 1989, they moved to Belgrade where he became an ambassador for the first time, representing Egypt to what was then Yugoslavia. There, Nevine learned the Serbo-Croatian language, which her husband said helped him “to understand the people and their culture. Knowing the native language not only helps you communicate better and open the minds of the people but also opens many doors too.”

Yet, they would not stay for long. The first-time ambassador and his wife were recalled, as were the ambassadors of many other major countries, to protest Slobodan Milosevic’s brutal regime.

“It was sad when we had to abruptly leave Yugoslavia,” Nevine said. “I remember it was a Saturday night when we got word that we had less than 24 hours to catch the last plane. There was no way we could do that. We still had to pack all our furniture, rugs, clothes and artwork and have it shipped. When we did leave, we didn’t know if we’d ever see our stuff again. Maybe it would just rot all summer in the heat!

“We ended up leaving the following Thursday by train, after packing everything up and having a farewell party. Saying goodbye to our staff, the locals who worked for us, was the hardest. They kept asking, ‘Are you going to leave us behind?’ It was very sad to see a country just disintegrate like that. At the reception, everybody was crying — our gardener, our cook, the rest of our staff. Many of our Yugoslav friends came to the train station to see us off. Everyone brought me a bouquet as is their custom. As the train pulled out, my arms were full of flowers. I will never forget it.”

The Hassounas arranged safe passage by train to Budapest and then went to Vienna, where they were able to catch a plane home. After a few months in Cairo, Hussein received word of his new posting as Egypt’s ambassador to Morocco.

“Lots of people wondered why they were sending us to Morocco, but the late King Hassan II was very important in the Arab political scene and we both speak French,” Nevine explained. “I am old-fashioned so I always make courtesy visits to the other spouses when we first arrive. I remember trying to have a polite conversation using my Egyptian Arabic with people who had a Moroccan dialect. Finally, I would say sheepishly, ‘Parlez-vous Français?’ And they did.”

And since Morocco, Nevine and her husband have continued their mission to showcase Arab diversity and moderation, though this time they speak not only for Egypt but for more 340 million people spread out over the Arab League’s 22 member states.

“What I want everyone to know is that Islam is a religion of tolerance and understanding,” Nevine said. “Hussein and I try to put the best face forward for the Arab world, trying to have Americans and Arabs understand each other better and know the truth about each other’s religions, culture. There is so much ignorance on both sides.”

To that end, the couple works with Bridges of Understanding, a nonprofit group aimed at fostering better U.S.-Arab cooperation that was started by Jordan’s former ambassador in Washington, Karim Kawar, and his wife Luma.

Nevine also proudly points to Arabesque, last year’s highly successful three-week celebration of Arab culture at the Kennedy Center, as a major effort to showcase Arab cultural contributions to the world down through the ages. “I only wish we could do that over and over again, but we are planning some smaller but equally interesting cultural events,” Nevine noted.

“We are proud that the Arab League is about to celebrate its 65 years as the oldest regional organization in the world,” she added. “It’s even older than the U.N. We started with seven nations on March 22, 1945, and now we have 22.”

“It is an honor to represent the 22 Arab countries,” her husband told us. “We have regular meetings and I often talk with each ambassador so I feel free to say in public what I think best represents our common position. In fact, I have more freedom as the ambassador of the Arab League than I ever did as an Egyptian ambassador.

“We do have big challenges today and that’s why I like it,” Hussein continued. “The challenge of terror is facing all of us…. The U.S. must look at the Arab world as a partner.”

As the Arab League ambassador, he also considers the 3 million Arab-Americans as his constituents and is immensely proud of how many have become prominent in U.S. society. They include Secretary of Transportation Ray LaHood, Congressmen Nick Rahall (D-W. Va.), Charles Boustany (R-La.) and Darrell Issa (R-Calif.), longtime White House correspondent Helen Thomas, political activist Ralph Nader and legendary open heart surgeon Dr. Michael DeBakey, among many others.

To encourage Arab-American dialogue, the Arab League organizes economic forums across the country. The ambassador also works to increase the number of U.S. visas granted to Arab visitors and students, and he is always looking for ways to give Arab culture more exposure.

For her part, Nevine has joined numerous women’s organizations during their postings abroad. In Washington, she presides over the 50-year-old Muslim Women’s Association of Washington, D.C., which is now attempting to fill the void left by the largely inactive Mosaic Foundation, made up of the spouses of Arab ambassadors to the United States.

“As president of the association, I look forward to working with the new appointees of the Obama Administration at the White House and the State Department who are focusing on increasing awareness and understanding between the Arab world and America. Of course, we want to increase our membership and have bigger fundraisers so we can offer more college scholarships to young Muslim women,” Nevine explained. “We also contribute to disaster recovery efforts like Haiti. I would like to make our group more important, more visible, and begin to hold major events with the help of the Arab embassies and global corporate sponsors who were part of Mosaic.”

Each year, the Muslim Women’s Association, which has successfully supported 100 Muslim female scholars over the past five decades, holds a fundraising bazaar on the Saturday before Mother’s Day. This year, it will be held at the Islamic Center on Massachusetts Avenue on May 8 (for information, visit http://mwawashingtondc.org). The association also holds monthly events at embassies and members’ homes.

According to her husband, Nevine’s volunteer work has greatly contributed to their effectiveness as Arab representatives in America as well as abroad.

“Throughout our life together at different posts around the world, Nevine’s leadership in women’s international organizations has enlarged our social and professional circles,” he said. “It is true here in Washington as it has been everywhere else. Here, through her friendships with the wives, I have been able to reach many members of Congress and the administration. In Paris, the crucial connection was through the women of French society, and in Morocco, it was her friendships within the royal family that created an opening for me. Nevine has been the perfect partner for a diplomat and, for me.”