It’s been just over a year since Cristina Balan left Washington, D.C., and her post as the ambassador of Moldova to the United States.

But as she took off from the city in June 2019, Balan wasn’t simply turning the page on another chapter of her diplomatic career. She was getting ready to pursue her childhood dream of becoming a full-time artist.

Even before Balan, a political appointee, had known she was going to be recalled from D.C. thanks to a new government forming in Moldova, she had begun preparing for a life after diplomacy. Sunday afternoons in her ambassador’s residence started to be spent in front of a blank canvas. Sometimes she’d even paint for an hour or two in the evenings after a long day at work.

“During the last three years, I’ve been thinking more and more about this, that I would like to do art,” Balan told The Washington Diplomat during a phone interview from her home in Chișinău. “I got back to Moldova and everybody was trying to figure out … how to find their place in the new political environment. I said, ‘No guys, I’m gonna do art.’ I started painting full time, all the time. I took some online courses in different art academies. I tried different techniques.”

After about half a year of painting in her studio, Balan said she felt it was time to let others see her work, and she applied to a New York art gallery. She’s now represented by Gallery 104, the Netherlands-based OnlineGallery.Art and the Tokyo-based TriCera online art gallery. During the coronavirus lockdown, Balan even opened a solo exhibition, “Transformation,” at a studio in Chișinău featuring 20 of her paintings.

She paints in explosions of color and energy. Working mainly in acrylic, Balan focuses on form, color, line and shape on large-format canvases. “I like to have a space for creation,” she says.

As a kid, Balan dreamed of an art career, studying from a very young age to go down a very different path from business and diplomacy. 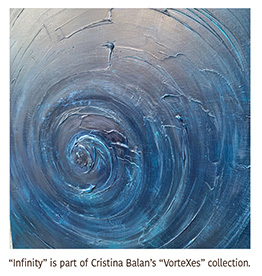 But her plans to attend the arts academy in St. Petersburg were scuttled by the collapse of the Soviet Union. Her parents lost their jobs. And so she rethought her entire future. “It was about survival,” she said. “I had to the pay the bills, support my parents and my little brother. So then it was about responsibility all the time.”

Balan advanced in business and politics, and she was appointed to be the ambassador to the U.S. at the age of 41. She threw herself into every aspect of the role, she said. “The work of a diplomat, especially in Washington, D.C., is very tiring. Honestly, I was sleeping only four hours a night during the week because of the time difference,” she said.

Balan would spend her early mornings figuring out the political developments in Moldova and then try to catch up on everything happening in the Trump administration in D.C. That was just by 8 a.m., she said, and then it would be a cascade of meetings and lunches and dinners and receptions and drinks and more meetings. And then she started to think about art once more.

“When I started becoming curious about art again, I started painting in Washington, D.C., mainly on the weekends,” she said. “One day I asked a friend — she’s an artist — I said, ‘Let’s go to the art supply store and show me what materials are used nowadays,’ because … I [hadn’t painted] for like 20 years.”

With that, Balan started painting again. When asked if she found any similarities between art and diplomacy, Balan quickly responded, “Oh yes, definitely.”

“Diplomacy is not an easy job. It’s not simple at all,” Balan said. “You have to be so creative and you have to be so knowledgeable. You have to be extremely skilled in order to really be successful, you know, because as a diplomat you deal with so many different aspects — it’s culture, it’s politics, it’s economy, it’s trade.”

Balan has two collections of paintings so far. One she describes as “energy art because it depicts vortexes … of different kinds of energy.”

“I’m also a very spiritual person and I believe in energies,” she said. “So I’m very passionate about this.”

The second collection is “very minimalistic,” she says, and it’s also connected to exploring questions of spirituality. “It’s about our connection with the universe, about the illusion of what is the reality, where does the illusion end? How do you perceive the world around you?”

As for Balan’s own world, she’s grateful for her time in Washington — and that it ended so she could pursue her artistic career.

“There are so many opportunities in Washington, D.C., for a diplomat,” she said. “It’s a wonderful concentration of everything, of different people. You can really achieve great results if you are very hardworking and active and responsible. So it was tiring for me and when I came back home, I said, ‘OK, I just need some time off now to recover’ because it was very tiring for me.”

She then adds with a laugh: “And now just thanks God I can do what I want to.”