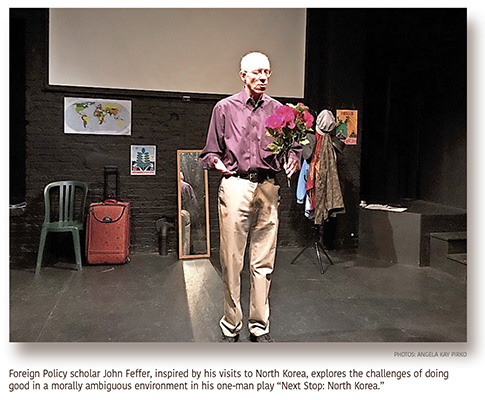 It’s not until the end of John Feffer’s one-man show, “Next Stop: North Korea,” that the foreign policy scholar-cum-playwright offers a withering comment on the failed second summit meeting between President Donald Trump and North Korean leader Kim Jong-un.

Adopting the guise of a Scottish tour leader who sets the context for the contemplative 12-scene comedy, he opens the question-and-answer session with a setup for a one-liner: “You could ask me what I think about the recent meeting, for example,” he says, “and I’d tell you: They were having such a lovely love affair, I thought they’d consummate it. But instead, we got summit interruptus.”

The co-director of the Foreign Policy in Focus project of the Institute for Policy Studies, a D.C.-based liberal think tank, Feffer has long blurred the line between his academic and creative work. His most recent novel, “Splinterlands,” for instance, describes a dystopian future that’s informed by his study of virulent nationalism and the pressures threatening to dissolve the European Union. And earlier one-man shows dramatized his thinking on the failed response to an ecological collapse and his research on the fall of the Berlin Wall and spoofed a well-known local type: the foreign policy pundit grubbing for “that most coveted of D.C. positions: a top administration job.”

The blending of disciplines works particularly well in his latest show, which is less a satire than a travelogue that takes the viewer on an imaginary visit to North Korea. Where journalism and policy writing all too often eclipse the ordinary people affected by the momentous events they describe, dramatization allows Feffer to portray and explore the nuances of life in one of the most closed-off countries in the world.

This includes delving into the conflicts and compromises that the totalitarian state demands of a foreign tourist and aid worker; a tour guide schooled in propaganda; a government apparatchik; and a taxi driver wrestling with patriotism and the struggle to survive. Because the so-called Hermit Kingdom is the proverbial black box for most viewers, the imaginative journey is especially evocative, although director Angela Kay Pirko has eschewed all but the barest hint of sets and costumes. 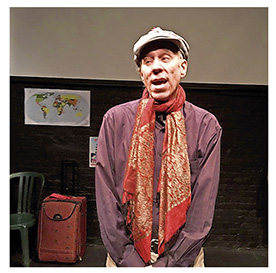 Based on three trips Feffer has made to North Korea, the show focuses on the experience of a similar aid worker type as he negotiates the hurdles presented by the country’s rigid control over citizens and visitors, and his own inner conflict between the desire to forge some kind of constructive relationship with the regime and the fear of becoming complicit in its repression. As our Scottish interpreter warns before the trip begins: “Americans go halfway around the world and they find … themselves!”

For the anonymous aid worker (and, by extension, the viewer/tour member), the comfortable cynicism in the face of clumsy propaganda (the Juche tower is like the Washington Monument — only bigger) is punctuated by disturbing epiphanies.

At the statue of Kim Il-sung, our aid worker meekly complies with the order to bow and lay a mandatory bouquet of flowers at the feet of the “Great Leader” despite his urge to rebel, for instance. But at the Museum of American Atrocities, amid evidence of the effects of U.S. carpet-bombing and the use of napalm during the Korean War, he finds “propaganda but truth there as well.” Confronted by the tremendous mound of a mass grave, he reflects: “Here I would bow.” But no such reverence is requested.

At a subsequent state banquet, he swallows his principles along with gritty rice and chicken so old it seems welded to the bone, knowing that ordinary citizens are lucky if they get to see a bowl of rice on television. But when he tells a visiting Frenchman of his horror at a museum exhibit depicting an incident in which American troops flooded a bunker with gasoline and roasted the North Korean soldiers inside, his previous epiphany is tempered by a new revelation: The bunker fire story is true, but it was perpetrated by South Korean soldiers, not American ones. 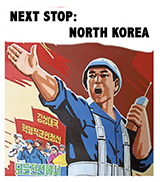 In other scenes titled “Kate Winslet of Pyongyang,” “The Minder,” “The Driver” and “The Defector,” Feffer imagines life in the dictatorship from the point of view of its citizens. These portrayals are affecting because they show that the North Koreans themselves are struggling with the same kinds of inner conflicts and reluctant compromises as the visitor. For instance, his hilarious (and perceptive) portrait of an apparatchik whose stint in America lingers on in his passion for karaoke tunes like Joni Mitchell’s “Both Sides, Now” — yes, he sings it — transcends simple parody when it extends to an explication of the North Korean state ideology of Juche, or “self-reliance.”

Self-reliance here means something more like “never submit,” as it’s better to be a starving wolf than a well-fed dog, Feffer explains. Its opposite is Sadae, or “the reliance on great powers.” In America, he says, for a time he enjoyed the variety at Baskin-Robbins. But before long, he realized that “in the U.S. and South Korea, there are lots of flavors of ice cream, but they all taste like Sadae.”

Like all of Feffer’s varied writing, in contrast to Sadae-tasting sundaes, “Next Stop: North Korea” is delicious from start to finish.

Jason Overdorf (jasonoverdorf.com) is a freelance writer in Washington, D.C.