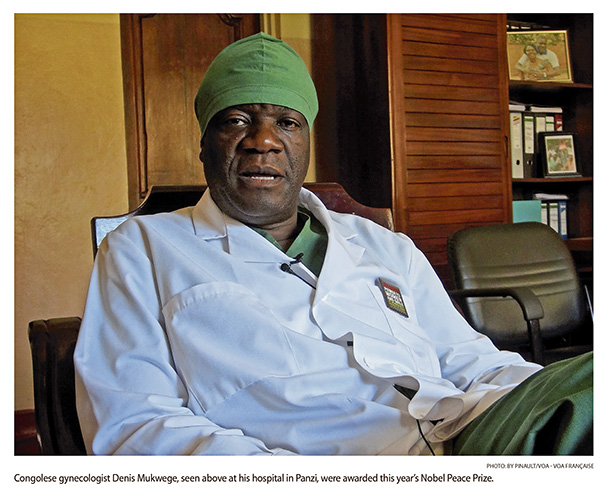 The Nobel Peace Prize will be presented this month in Oslo to Nadia Murad and Denis Mukwege for their efforts to end the use of sexual violence as a weapon of war and armed conflict. Both have taken great risk to give a strong voice and a helping hand to the victims of unimaginable horrors.

Murad was captured by the Islamic State in Iraq in 2014 and forced to serve as a sex slave to militants alongside thousands of other Yazidi women. She escaped, fled to Germany has since pushed through the trauma of being raped and tortured — and losing her mother and six brothers — to become a global activist against rape and human trafficking.

Mukwege, a world-renowned gynecologist working in the Democratic Republic of Congo, has risked his life to perform operations on thousands of women who’ve been violently raped and mutilated. Among the injuries he’s treated: digestive tracts ripped apart and bullets fired into women’s genitals.

Murad’s brave testimony before the United Nations, and Mukwege’s unshakeable dedication to treating women and girls in his hospital, confirm the importance of the U.N. agenda on women, peace and security, as adopted through Security Council Resolution 1325. Women and girls are more vulnerable. And they are affected by war and conflict in a different way than men and boys are. 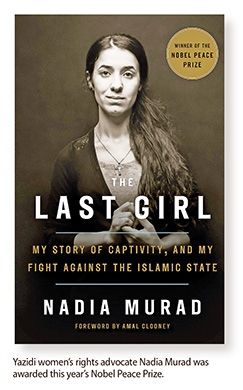 Reactions to the decision this year by the Norwegian Nobel Committee, an independent institution with members elected by the Parliament of Norway, have been overwhelmingly positive throughout the world. The topic is seen as timely, and the candidates could hardly be more worthy.

The committee hasn’t always been praised for its choices. Contrary to the prizes in, say, physical science or chemistry, “everyone” has an opinion on who deserves the Peace Prize — and who doesn’t.

One of the reasons is that Alfred Nobel — a 19th-century Swedish scientist and inventor of dynamite — never defined clear and specific criteria for choosing a candidate. In his will, Nobel merely stated that the Peace Prize is to be awarded to “the person who shall have done the most or the best work for fraternity between the nations, for the abolition or reduction of standing armies and for the holding and promotion of peace congresses.”

As there are no objective truths as to “who has done the most” for mankind, the selection will inevitably be influenced by personal opinions.

Not all recipients of the prize have been awarded for achieving peace. In fact, most of them have not. The Nobel Peace Prize has time and again been awarded as an acknowledgement of the efforts of an individual or institution to achieve peace, rather than for a successful result. The Peace Prize is, more often than not, used as a tool to encourage the promotion of peace.

The Nobel Peace Prize continues to enjoy remarkable prestige to this day. One explanation for this may be that, in the course of its century-long existence, it has obtained a position of seniority among the many prizes that exist today. And, contrary to most other awards and recognitions, the Nobel Peace Prize belongs to a family of prizes. Together the five prizes instituted by Alfred Nobel carry an enormous weight.

I’m often asked why Alfred Nobel, a Swede, wanted a Norwegian committee to select the laureates of the Peace Prize. There are several possible answers to this question. Some point to the fact that Nobel was a true internationalist, having spent part of his childhood in Russia and later living and working in many countries. National borders mattered little to him. Besides, throughout Nobel’s life, Norway and Sweden were united under one king. One theory then is that Nobel found it fair to leave one of the five prizes to Norway, generally thought to be the “little brother” of the union. Some also point to Nobel’s admiration for the independence-minded Norwegian writer Bjørnstjerne Bjørnson.

What is certain is that the world continues to watch with intense interest every time when, in early October, the chairman of the Norwegian Nobel Committee exits the door to the committee’s meeting room to announce the Peace Prize Laureate or Laureates.

And people throughout the world will continue to have strong opinions on who is most deserving of the Nobel Peace Prize, sparking a healthy debate on our ever-changing notions of global peace.