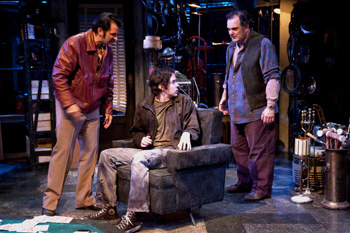 Plays are not about nice things happening to nice people,” playwright David Mamet once told a TV interviewer. “Plays are about conflict.” After witnessing Mamet’s infamous “American Buffalo” at the Studio Theater, you’ll likely consider this to be an understatement. The production is one big conflict you won’t want to miss.

Joy Zinoman’s choice for the 70th and final production she directs as Studio’s founding artistic director is a powerful one and representative of Studio’s love affair with all that is artistically brilliant and deranged. Mamet’s works have served as timekeepers at Studio Theatre — having been produced at the beginning, middle and end of Zinoman’s 35-year guidance. On Sept. 1, 2010, Zinoman will hand over her torch to David Muse, who will leave his post as associate artistic director at the Shakespeare Theatre. It’s an emotional time for Studio Theatre, something this production is not short on.

“American Buffalo,” which put Mamet on the theatrical map when it premiered in 1975, set the pace for what is known as his archetypical “Mamet speak” — cynical, clipped, street-smart banter with which his characters convey their deep dreams and demons. With only three men, one set and sparse dialogue, Mamet brings an entire universe alive. And although it may appear intensely foreign — filled with paranoia, longings and twisted alliances –— Mamet somehow lures us into his characters’ world. His use of murky, detached and cryptic details (major events are called “the thing,” and huge pieces of information come in clichés), are similar to playwright Edward Albee’s depictions and suggest a universality that pulls these aliens closer to us than expected.

Just as incoming David Muse will have a large footprint to fill, so did Zinoman when casting a play that has been performed by such masters as Al Pacino and Dustin Hoffman. Edward Gero, considered one of Washington’s leading stage actors, is a powerfully repressed Donny, a junk shop owner who plays host to local card gambling and criminal enterprises. Peter Allas (some may remember him as “The Counter Guy” in a “Seinfeld” episode) plays a relentlessly aggressive Teach, the would-be mastermind of their collective thievery. And Jimmy Davis, last seen in Washington as Juliet in “Romeo and Juliet” at the Shakespeare Theatre, is a touchingly tragic Bobby, Donny’s young criminal protégé and a local junkie.

The three set about trying to steal back a valuable buffalo nickel that was purchased by a coin collector from the junk shop, but the robbery takes a vicious turn when greed, aggression and the complex dynamics among the three men ultimately get in the way. 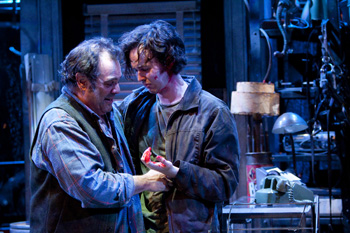 Each actor does his part justice. Perhaps the only blemish of this production is that Gero’s morally conflicted Donny slightly upstages Allas’s Teach, who comes off as little more than a crazed manipulator. Mamet gives Teach an underside that is less obvious in this staging. Perhaps this is because Donny’s character has so many palpable layers — one moment he wants to rob a stranger blind and the next he yearns to play father for wayward Bobby. Though Teach remains entrenched in his revengeful tunnel vision, Mamet has softened him with comical insecurities that Allas doesn’t take full advantage of. Consequently, the play is missing some of its intended humor.

But where characterization may be slightly lacking, designer Russell Metheny makes up for it with a painstakingly detailed set. What we don’t see outside the junk shop has made its way inside with floor-to-ceiling shelves and displays that house countless discarded objects, which visually parallel the characters’ emotional outcast status.

In the end, we ask: Why should we observe these exiles in their self-imposed imprisonment?

But there is a perverse pleasure in sitting down to a Mamet masterpiece (and “Buffalo” is known to critics as his greatest). We travel with trepidation to the theater, give the usher a nervous smile, and make our way cautiously to our seat, all the while knowing we’re playing with fire — because what’s coming is a gut-wrenching, painful, dangerous flirtation with emptiness and loneliness.

Yet, somewhere along the uncomfortable journey, we start to feel special (and not just grateful that we aren’t one of Mamet’s characters). It’s as if some horrible creature has entrusted us with its most dreaded thoughts and deeds. For this we thank the playwright, because what better privilege is there than being let “in” on a dark, vulnerable secret? In the obscurity of the theater, we are grateful to have been told the truth.

Ultimately, and for better or worse, this play is about ourselves.